This is by no means as epic as some of the legislative brawls we've considered before, but it does involve one flying kick and at least three flying iPads (or one that flew three times, it's hard to tell). Also lots of yelling in Turkish.

Most of the yelling there these days is due to a struggle between the government and the judicial branch over corruption allegations. On January 11, members of Parliament were debating a bill that would give the ruling party more power over the judiciary, and wouldn't you know it, the non-ruling parties objected to this. The still below, from this Hürriyet TV video, captures the moment that Zaylit Aslan (Justice and Development Party) leaps into the air and delivers a shoe-based rebuttal to Omar Faruk Eminağaoğlu (Republican People's Party). 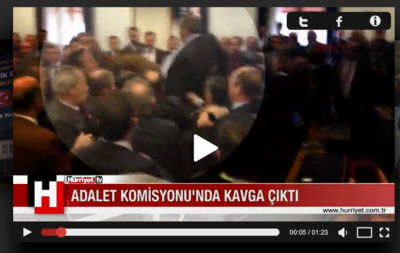 Although the report is entitled "Mecliste Uçan Tekme" ("Flying Kick in the Parliament"), it's not entirely clear that Aslan delivered a true flying kick. It looks like he may have jumped up on a table first, which seems like cheating.

By contrast, there was no question that the legislator in the second video here ("Tear-Gas Filibuster Fails in South Korea" (Nov. 23, 2011)) definitely had the judo skills so necessary these days to get controversial bills through increasingly polarized legislatures.

Lawyer-Musician Kicked Out of R. Kelly Courtroom for Trying to Hawk CD