Well, it's disturbing enough that Harvard's law library actually houses a copy of this book (and that someone has it checked out when they should be studying), but now here it is on Joseph Story's lap. 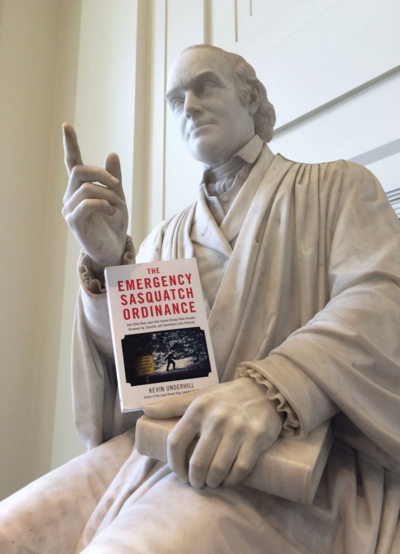 "Listen, I wrote Martin v. Hunter's Lessee.
I don't have to put up with this crap."

Joseph Story, of course, was the inventor of the mullet, but he also found time to serve on the U.S. Supreme Court from 1811 until 1845. (He was only 32 when he was appointed, still the youngest ever.) He did indeed write Martin v. Hunter's Lessee, in which the Court informed Virginia that oh yeah, it did so have jurisdiction to hear appeals of state-court decisions on federal issues. He also wrote the decision in The Amistad case, was a professor at Harvard while he was on the Court, and was a very successful author as well.

Whatever. My book is funnier than Commentaries on the Law of Bailments, or at least I hope it is.

Many thanks to Rebecca for the picture.