As a couple of readers have pointed out (thanks Patrick and Jeff), Vocativ.com scored an interview with the high elf who failed in his assault on Morgoth the other day. See "Fingolfin Defeated by Morgoth (This Time in Portland)," Lowering the Bar (May 18). Turns out it was not in fact Fingolfin—although that analysis was dead-on based on the evidence available at the time, and you know it—but rather "night elf rogue Jaypar Prakkari, the protagonist of [the] fantasy series Alkaya: The Legend of Empyro, who battles mythical creatures and a dark plague in a parallel world."

Actually, it was just some dude named Konrad in elf ears. 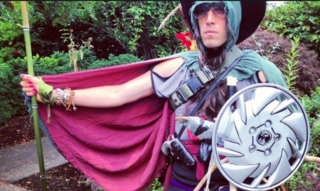 Photo courtesy of … Jaypar, or whatever
(ears not shown)

"A self-described rogue assassin," Konrad McKane—whose actual legal human name is Konrad Bass, which seems just as good as his fake human name—spoke to Vocativ from a hospital in Beaverton, Oregon, where he is said to be undergoing psychiatric evaluation. Not a totally unexpected result, having punctured somebody's BMW with a sword while dressed like a Warcraft refugee.

"That woman was totally bad-vibing me," said our protagonist, who is clearly still suffering from something if he thinks it's ok to use "bad vibe" as a verb. "I wasn't in my right mind. I was still rocking my new pair of elf ears." Fair enough. In addition to the ears, though, he was also rocking some MDMA, DMT and LSD, which he referred to as the "trifecta." "Man, that shit is awesome!" he announced. "But don't do it alone. Otherwise, you'll end up wandering the streets on a weird spirit journey." His spirit journey lasted all night and ended with him standing in an intersection jabbing at rush-hour traffic.

Konrad claims to suffer from hypomania. That's certainly possible, although it strikes me that some of the same symptoms mentioned in that linked article might also be explained by a trifecta, and I also noticed that Konrad said he "love[s] being crazy" because "[i]t's my get-out-of-jail-free card." I guess he could have said that in one of his rare moments of lucidity, though.

As that quote suggests, Konrad/Jaypar has been arrested before, most recently after climbing a downtown lamppost while dressed as a ninja. After the Morgoth incident, he said, "the cops were pretty nice … but they broke my master sword. I was so pissed!" Listen, if they could just break it without +3 Gloves of Gripping or something like that, it probably needed to be reforged anyway.