According to this report (Hurriyet Daily News), Yusuf Yerkel took some time off work over the last few days so he could recover from injuries suffered in the brutal incident pictured below. He, of course, is the one shown kicking a helpless man held down by two soldiers. 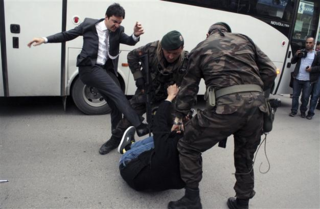 Yerkel is an aide to the Turkish prime minister, and he and his boss were visiting the town of Soma, where more than 300 miners were killed in a fire recently. The local citizens, still grieving, are also angry at the government over safety standards and an allegedly slow response to the disaster. So, maybe not the best time for a visit? But having decided to visit, probably not best for the Prime Minister to tell relatives of the dead that these sorts of things are "par for the course," or make statements like "what happened, happened."

Also, should the Prime Minister then happen to slap someone, or be accused of doing so, statements like "If you boo the country's prime minister, you get slapped" are not going to enhance his popularity.

Also he shouldn't slap anyone.

So, for multiple reasons, local citizens were loudly protesting the government during the visit on May 14, when the incident above took place. Of course, exactly what happened depends on who you ask. Witnesses claimed that one of the protesters kicked a car in the Prime Minister's motorcade, and was then dragged away by soldiers. Suddenly, Yerkel ran up and kicked the helpless man several times, choosing to do so while the man was still on the ground and all of them were in front of a camera.

According to a spokesman for the ruling party, though, Yerkel said he was the victim: "Yusuf Yerkel said the person who he was kicking on the floor had attacked him, injured him, and that he has taken medical leave for seven days" as a result, said Hüseyin Çelik. Oddly, though, the medical report says Yerkel was injured in a fall. And quite a fall it was, apparently, considering that he was diagnosed with "soft-tissue trauma" to the right knee and "the left shoulder and front of the chest." I guess you could fall and injure your right knee and left shoulder, but it seems like it might be difficult. For his part, Ćelik argued that it was "not possible to establish the truth from just a photograph." No, especially when it's as ambiguous as the one above.

Okay, so how about a video?

The video shows the man kicking the car and then being dragged away, and then a guy in a suit runs into the frame and starts kicking. It really seems pretty straightforward. If Yerkel was attacked or fell down, it wasn't during this incident.

I'd really like to think he injured his kicking leg while kicking a helpless protester, so that's the explanation I'm going with.

TIP: He’s Probably Not Going to Show Your Snake to His Girlfriend

Trump Campaign Not Liable for Hiring Roscoe the Pistol