Looks like it's safe to go back to using the symbol for pi on t-shirts, at least for now. Someone whose initials are P.I. managed to get the symbol (followed by a period) registered as a trademark, and where there's a goofy registration, there's gonna be a goofy cease-and-desist letter. 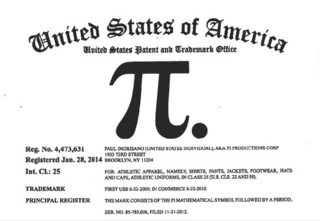 This one was sent to t-shirt maker Zazzle, which was scared by it for a couple of days but according to Wired (thanks, Frank) has now reinstated all the π-bearing apparel it had embargoed.

"We represent Paul Ingrisano ('Ingrisano')," the letter begins, thus helpfully defining the term that counsel will use to refer to his client in any later instances in which such reference may be necessary. Are any other Ingrisanos mentioned in said letter with whom the aforesaid Ingrisano might be confused? No there are not, making that the first (or maybe the fifth) of many unnecessary words in the letter. More importantly, are any π-bearing t-shirts being sold on Zazzle with which the aforesaid trademark might be confused? The answer there also seems to be no.

In fact, Ingrisano's attorney admitted to Wired that he was unaware of any designs being sold through Zazzle that included the exact trademark his client had registered—π followed by a period. But, he insisted, "[s]ome clearly have a pi sign and look similar enough that folks out there might confuse it with products that my client also sells." This isn't my field, but that seems pretty close to an admission that the claim in the letter is frivolous.

The symbol for pi could theoretically be part of a trademark, according to Mark Lemley, a Stanford law professor quoted by Wired. "If you want to sell t-shirts and on the tag your brand name is the symbol pi, I think that's a reasonable trademark," Lemley said. "But if what you want to do is actually prevent people from using the symbol pi on a t-shirt, then I think you're missing the point of trademark law," which is to allow a trademark holder to prevent others from using confusingly similar marks. Here, Ingrisano presumably added the period in the first place so the Patent & Trademark Office would be less likely to reject it as too "generic" to register. (See, e.g., USPTO, "Basic Facts About Trademarks.") If so, then he shouldn't be able to turn around and claim that a pi symbol without the period might confuse consumers into thinking an item is one of his products. And since his attorney has admitted that as far as they know, there are no products actually bearing a "π." symbol being sold anywhere on Zazzle … well, it almost seems like he shouldn't have sent the letter in the first place, doesn't it?

On the other hand, the letter does direct Zazzle "to CEASE AND DESIST ALL COPYRIGHT INFRINGEMENT," and surely he wouldn't have used all caps unless he thought this was really a serious matter.

Please note that I'm not saying that the claim is irrational. Seriously, I'm not going to say that.

UPDATE: The main reason using all caps is a bad idea is that although people use it for emphasis, usually it has the opposite effect because language in all caps is harder to read. This, I think, is why someone had to point out to me just now that although this is a trademark dispute, the letter demands cessation of COPYRIGHT infringement. Oops.