In what may be the year’s least shocking development so far, the TSA has affirmed its own order imposing a fine on John Brennan, the guy who stripped at a Portland checkpoint in 2012, causing the TSAgents to get all flustered. See “TSA: Wants to See You Naked, Complains When You Get That Way,” Lowering the Bar (Apr. 18, 2012). Brennan was acquitted of indecent exposure after a judge found he had been engaging in expressive conduct (“symbolic nudity”) that is protected by state law, but that troubled the TSA not at all.

It fined him $1,000 for doing this, claiming he had “interfered” with screening operations when he took off all his clothes. As I discussed here, and then again here, that’s the same bullshit argument police use when they arrest people for filming them—we had to come over there and stop you from doing something you’re constitutionally entitled to do, and so you “interfered” with us. But that logic makes perfect sense to the TSA, and in particular to the administrative-law judge (a TSA employee) who upheld the penalty (reduced to $500) in April. Brennan appealed.

Because this is an agency proceeding, the initial appeal is still within the agency, in this case to the deputy administrator. And as I mentioned above, because I didn’t want you to be on pins and needles wondering what happened, he affirmed the ruling. The final order (PDF via PapersPlease.org) is again based entirely on the “no, you interfered with us” argument (about which I feel as described above). This also has the benefit (for the TSA) of making the law irrelevant. In fact, the deputy administrator says in his opinion, “I agree with TSA”—of which he is the deputy administrator—”that Respondent’s arguments regarding the legality of the nudity are not relevant.” Well, that’s handy. 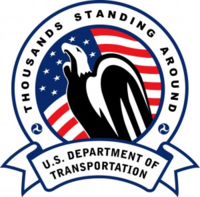 By the way, he admits in his opinion that the checkpoint was closed “for approximately three minutes” as a result of the incident, yet affirms the finding that because of this, the agents “were not able to conduct screening in an efficient manner on other passengers present at the checkpoint.” So the TSA is claiming here, with a straight face, not only that it screens passengers “in an efficient manner” to begin with but that it is so efficient that punishment is justified if you delay it by three minutes.

I don’t know about you, but I’ve been pointlessly delayed by much more than three minutes by the TSA approximately EVERY TIME I HAVE FLOWN DURING THE PAST DECADE, so I would describe that claim as farcical.

The law does provide for a further appeal now that the TSA is done pretending to review the matter. That appeal is to the Ninth Circuit and must be filed by mid-November. Please hope along with me that the Ninth Circuit will reverse.

A Brief Lesson on the Law of Design Defect