"The yoga community went into uproar," says the Electronic Frontier Foundation, after companies that offer online fitness classes got letters from a competitor, YogaGlo, saying that it had applied for a patent on the "method and technique" involved. The method and technique involved is basically putting a camera in this location: 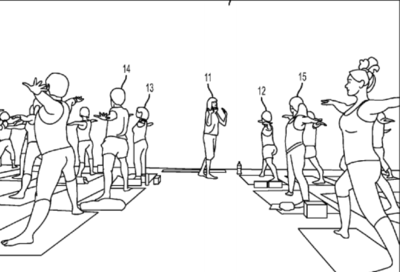 And no, that is not the kind of thing that you should be able to patent. Patentable inventions are supposed to be "novel" and "nonobvious." As EFF's report makes clear, this patent should not have been granted for multiple reasons, and in fact the company's applications (it filed two) were initially rejected—which apparently was the status at the time YogaGlo sent these letters.

This one, for example, was sent to Yoga International on August 26, 2013. It doesn't claim that the method has been patented, but does emphasize (and enclose) the applications and says that "upon patent issuance, damages may be due retroactively …."  The letter doesn't actually tell the recipient to do anything other than contact YogaGlo's lawyers "at its earliest convenience," but I think it would certainly give at least a nonlawyer the impression that a lawsuit is just around the corner unless the parties can "amicably resolve this issue."

Note that the letter fails to mention that both applications had just been rejected, which happened on July 3 and August 5 respectively. While that obviously was not a final determination, it still seems misleading to send letters arguably implying that you are gearing up to enforce your rights at a time when the most recent news is that you don't have any rights to enforce.

Yoga International did not knuckle under, in any event, and this is the point at which "the yoga community went into uproar." Some members of that community know something about patents, because more than one wrote YogaGlo to explain why the "invention" was probably not patentable. Among other reasons, there are similar YogaGlo videos online that were posted years ago, which is relevant because of the "one-year statutory bar": patents generally aren't granted if the invention has been public knowledge for more than a year. According to EFF, YogaGlo should have but did not tell the PTO about these videos when it tried to get the examiner to reconsider. One of them did reconsider and approved the patent.

In an unusual development, though, YogaGlo announced last week that it had decided to forfeit the patent (and the other still-pending application), and it filed the necessary documents to do that. Its statement continues to defend the "look and feel" of its videos, and maybe it does have a valid trademark or (less likely) copyright interest to protect. But the patent was stupid (and remains EFF's Stupid Patent of the Month for October 2014).

Good Reason to Kill #66: Took a Bite of Your Grilled-Cheese Sandwich