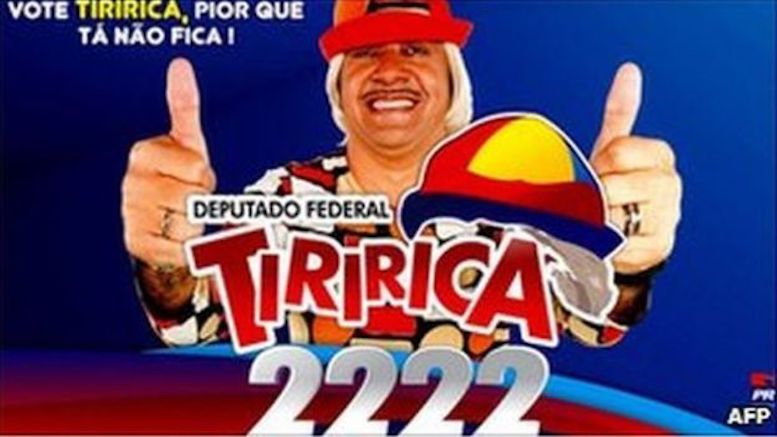 In 2010, Brazilian voters delivered a landslide victory to Tiririca, also known as Francisco Everardo Oliveira Silva, casting 1.3 million votes in his favor and electing him to a seat in Congress. This was despite his lack of experience in public service, reports that he was functionally illiterate, and concerns that he would not take the job seriously, given that until then he had worked only as a clown. But he won easily, getting twice as many votes as his closest competitor. See “Illiterate Clown Elected to Congress,” Lowering the Bar (Oct. 4, 2010).

At that time, of course, the idea of an illiterate clown running for office was significantly more comical than it is today. But let me give this a shot anyhow.

Tiririca (which translates roughly to “Grumpy”) was re-elected in 2014, running as he had in 2010 under the campaign slogan, “It Can’t Get Any Worse.” But it may not have gotten any better, either, judging from the reports last year that Tiririca had become so disillusioned with his fellow politicians’ laziness and corruption that he had decided not to run for a third term and instead go back to clowning full-time.

“I am embarrassed,” Tiririca said last December, by the corruption rampant in Congress, where more than half of the members are reportedly under investigation. “I walk with my head up high because I did nothing wrong, but many of you do not have the guts to do that. You even put [on] disguises to go out. Being a congressman is [shameful].” He was also upset that so few of his colleagues ever show up for work. “We are well paid to work, but only eight of 513 actually show up here often,” Tiririca said. “I am one of those eight, and I am a clown.”

The clown was speaking to a nearly empty chamber.

In April, though, Tiririca said he had changed his mind and would seek a third term after all. He said the change was at the request of his fans (fans of his work as a clown, at least, not necessarily as a legislator), who he said had been urging him to run again. “So I announce here,” he said at a party convention in Brasília, “that I am again disputing another election. And I want to be number one,” he continued. “I want to beat Enéas.”

That was a reference to Enéas Carneiro, who received 1.57 million votes when he ran for Congress in 2002, apparently the most votes any federal deputy has ever received in Brazil.  Tiririca’s 1.3 million in 2010 put him in second place, but he dropped to third after some other guy got 1.5 million in 2014. I think usually the votes are just the means to an end, but I guess it’d be fun to break the record.

The decision to run again, of course, is inconsistent with the fiery speech the indignant clown gave in December about being embarrassed by serving in Congress. Asked about that, he was pretty straightforward. “I changed my mind,” he said. “I said I would never get married again and I’m married. We change our minds.”

The report did not say whether Tiririca plans to use the same slogan this time around. “It Can’t Get Any Worse” was pretty funny to begin with, but I’m not sure the joke still works after you’ve been in office eight years.

Jury Finds Florida Man Was Not “Too Fat to Kill”