Hey you guys, the TSA has released its annual Look What We Found summary, and it turns out they found a lot of things! 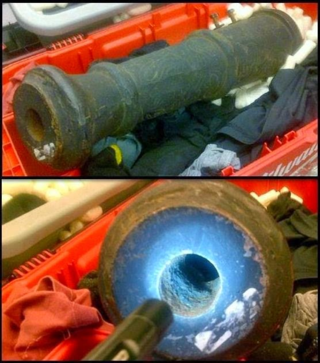 Cannons are prohibited, of course, because of the obvious risk that the enemy would use them to lay siege to the cockpit.  Or, a group of air pirates might stick them out the windows and start firing broadsides at other planes!

Our heroes say they found this last October in the luggage of a passenger planning to fly from Hawaii to San Francisco. It was in a checked bag, not a carry-on, so in fact there was no risk of air piracy in this case. But the TSA noted it both in its week-in-review blog post at the time and again in the recent year-end summary, apparently including it in its list of “firearms” or replica firearms that agents had discovered. The TSA’s blogger(s) have never responded to at least a dozen questions from commenters as to whether the cannoneer was allowed to fly or not. (They also wanted to know whether he brought gunpowder, cannonballs, and fuses, but I suspect those questions were tongue-in-cheek.)

Turns out that he was allowed to fly, “but had to make special arrangements to transport the cannon barrel.” That report, in the L.A. Times, doesn’t say why that was necessary. According to the TSA, size and weight limitations are up to the airlines. So if the airline weighed this bag and was okay with it, it’s not clear to me why the TSA had any business telling the guy how to transport his cannon. And why would he have thought there’d be a problem? Their can-I-bring-it search box doesn’t say you can’t:

Firearms are allowed as long as they are unloaded and carried in checked bags, and this is (or was once) a firearm. So what the hell?

There are more important points to be made about the recent report, of course. For example, the TSA says that on average, it finds six firearms every day in carry-on bags. There are about 30,000 flights per day in the U.S., so the chances someone will try to smuggle a gun on a particular flight are maybe 1 in 5000. But those are the ones they find. If you think the TSA finds any significant percentage of the weapons people try to bring on board, you have not been paying any attention at all. So, let us assume that there is in fact at least one flight every single day on which at least one passenger is armed. Seems like a fair assumption because of the hundreds of attempted hijackings every year that involve handguns.

Not only does that happen approximately never, the TSA does not say whether it (or law enforcement, rather) found the gun owner to be an actual security risk, let alone a terrorist, in any of the 2,212 incidents it’s reporting from last year. I bet if it had, it’d say so, don’t you think? In other words, I don’t know why people are trying to bring guns or knives or whatever on board (and I don’t think they should be allowed to). But I do know that the implication that the TSA is important and necessary because they find this stuff should not be taken seriously.

Also, of course, so far as I can tell all of this would have been found by a simple metal detector or by x-raying carry-on bags, again showing that spending many millions on fancy scanners is not necessary.

I will eat these words if I end up being forced to walk the plank by an air pirate, but that doesn’t seem very likely.

Good News for Law Firms: UFOs Are About to Save Us All

On Second Thought, Don’t Pick Up Any Hatchet-Waving Hitchhikers at All