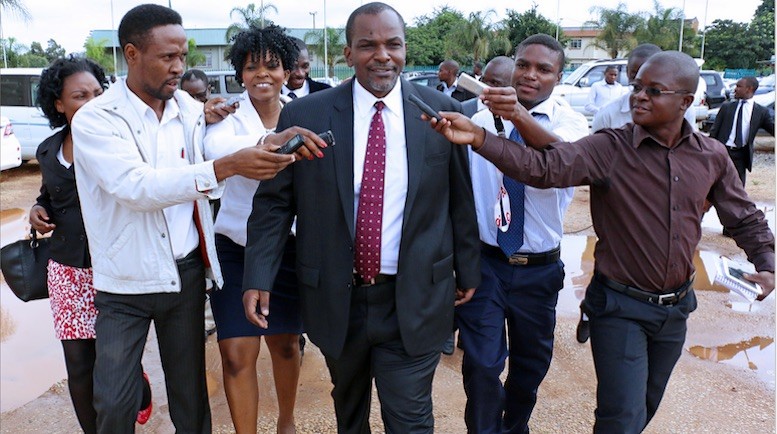 Although it is surprisingly difficult to find solid news reporting out of Zambia, several different sources including AFP have reported that the country’s Director of Public Prosecutions decided to drop nine corruption charges pending against a highly placed official, namely himself:

Zambia’s top prosecutor … stunned a magistrate when he refused to prosecute himself on charges of abuse of office and declared himself a free man.

“I am the Director of Public Prosecution of the Republic of Zambia and I have decided to enter a nolle prosequi against all the charges,” Mutembo Nchito told the magistrate from the dock, using the Latin term for refusing to pursue a case.

He did not apologize to himself for ruining his reputation, but then he did not bring the charges in the first place. They were apparently brought by former finance minister Newton Ng’uni, and that does seem a little irregular but Ng’uni may have been concerned that Nchito would not do the right thing on his own. Or the charges may have been politically motivated, but who the hell knows.

Ng’uni appealed Nchito’s decision, taking the not totally unreasonable position that an accused person should not have the power to self-exonerate. But that judge agreed with Nchito, saying that because this accused person happened to be the country’s Director of Public Prosecution, he “has the power to stop any criminal case against anyone in Zambia, including himself.”

President Edgar Lungu promptly appointed a special tribunal to probe the allegations, and those proceedings are reportedly and appropriately scheduled to begin on April 1. The tribunal is made up of three former Chief Justices and a “Tribunal Secretary” who may or may not be a political appointee. But according to a Prominent Lawyer quoted by the Zambia National Broadcasting Corporation, at least, Nchito will get a fair hearing:

Mr. Sikota says any lawyer would want to appear before a tribunal chaired by former Chief Justice Annel Silungwe because of its members’ vast legal experience.

Personally I would rather appear before a tribunal in which I could dismiss the charges if things weren’t going well, but I guess there is nothing to worry about in this case.

How to Avoid Jury Duty, #9: Leave Your Vote With the Foreman and Go to Cancún [Updated]

TSA Has Objected to Lightsabers Before