As you know, President Obama is determined to close the detention facility at Guantánamo Bay, which he promised to close in 2007 and has desperately been trying but failing to close since his second day in office. See Executive Order 13492 (Jan. 22, 2009) (declaring that it would be closed “no later than one year from the date of this order”); but see Exec. Order 13567 (Mar. 7, 2011) (requiring periodic review of each detainee’s status, such review to begin “no later than 1 year from the date of this order”), and so on and so forth.

This isn’t the place to bore you with all the reasons the president is supposedly unable to do this, so I’ll just limit myself to the one about how despite allegedly having the authority as Commander in Chief to unilaterally commit the nation to war, he is powerless to move some dude from one federal building to another federal building without the approval of the other two branches of government, the UN Security Council and the United Federation of Planets. That’s the main one anyway, as I understand it.

Of course, nobody wants the Gitmo detainees in their backyard, because, after all, one or more of them might actually turn out to be terrorists (it’s possible) and then might be able to escape (it’s not impossible) and do something bad. Or, at least, nobody who wants to be re-elected to Congress is going to fail to object to having the possible terrorists housed in their district, no matter how tiny the risk. So that part I understand.

But arguing that Fort Leavenworth isn’t suitable because it’s next to a river and so terrorists might sneak up the Missouri River in little submarines to rescue their comrades kind of makes it seem like you’re not even taking this seriously.

That’s my impression of this statement by Kansas Senator Pat Roberts (Roll Call), which he made in a letter to the Secretary of Defense explaining why Leavenworth won’t work:

Fort Leavenworth is neither the ideal nor right location for … Guantánamo detainees. The installation lies right on the Missouri River, providing terrorists with the possibility of covert travel underwater and attempting access to the detention facility. [It’s also next to a railroad.] Because of these impediments, I expect your staff will find Fort Leavenworth unfeasible for housing Guantanamo terrorists.

Well, it … wait, what was the middle part again? 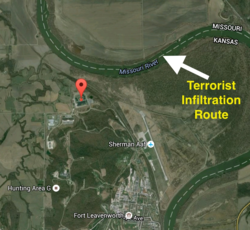 I understand the concern about an escapee potentially having access to some means of transport. This is why no prison in America is anywhere near a road or railroad. (That is sarcasm.) And while many reports claim no one has ever escaped from the maximum-security prison at Leavenworth, it appears that at least one person has, a guy who got loose for four days in 1988. But since they no longer allow inmates to make ladders in wood shop (seriously, that’s how he got out), the next guy will have a much harder time of it. Still, that’s one person in 141 years. But it’s not impossible, and once out, maybe he could float evilly down the river to his next target.

But that’s not what Roberts was talking about. He said that the river would “provid[e] terrorists with the possibility of covert travel underwater and attempting access to the detention facility.” (Emphasis added). So plainly he was suggesting not that an escapee could swim away but that others could use the river to infiltrate Kansas and try to free him.

This seems very highly unlikely to me, for at least two reasons. 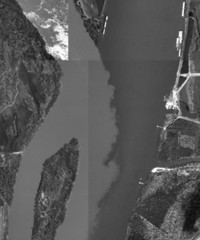 First: Roberts could have been talking about terrorists getting close to Leavenworth by other means and then putting on scuba gear for the last stage of “covert travel underwater.” Only, the Missouri (on the left in this picture, showing where it meets the Mississippi), sometimes called “the Big Muddy,” is notoriously silty. This is said to be one reason why steamboat traffic was common on the Mississippi but not the Missouri—they couldn’t see submerged rocks or monsters or whatever the hell is down there. And so your terrorist frogman is not going to have much luck navigating that way. (Plus, it’d probably be a lot easier to get on the base by just getting a job delivering pizza.)

This can only mean one thing: Pat Roberts is worried that terrorists will invade Kansas by submarine.

Sure, the sub would also have to deal with the murky water. But subs have sonar and periscopes. This is not going to be the biggest problem, however. The biggest problem would be just getting there, because—unless a bunch of Arab guys could build, equip, and launch a submarine somewhere in the Midwest without any eyebrows being raised—they are going to have to come up the Mississippi to St. Louis and then follow the Missouri over to Leavenworth. That’s about 1600 miles, plus the distance to the terrorist sub base. And any sub big enough to carry that much fuel is going to be too big to get up the Missouri, which for the most part (according to the Corps of Engineers) is at most 6 or 7 feet deep.

Second: even if it were possible, why would they go to so much trouble? If you have a terrorist sub, you’re not going to use it for this. And after all, there is some accumulated evidence that the risk they will try to rescue accused terrorists being held in a high-security prison on a U.S. military base that is right next to the water is pretty darn low.

And I doubt that risk goes up if you move them to Kansas.

Court: “Driving Carefully,” “Probably an Indian” Not Probable Cause for Stop

Nevada Legislator Proposes Bill on How to Pronounce “Nevada”