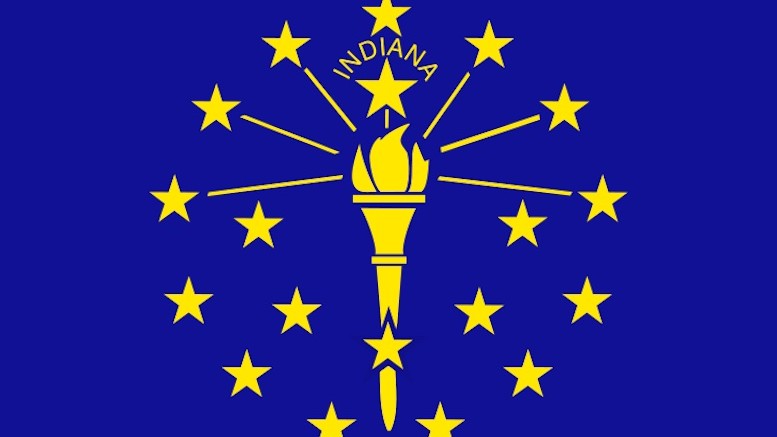 The flag of the Great State of Indiana

Here’s what I was thinking of yesterday, I assume, when I noted that Michigan had repealed its laws against improper singing of, or any dancing to, the U.S. national anthem and mentioned that this sounded familiar. This was (but no longer is) a draft post from 2012 about an Indiana bill that had just been introduced. I have no idea why I didn’t finish it then, but here’s what I wrote at the time:

Rolling Stone (among others) reports on an Indiana state senator who is sick and tired of people deliberately mis-singing the national anthem like somebody told her they heard someone did one time at that thing last year. Vaneta Becker has at last introduced legislation to deal with this persistent threat to American values.

Unlike some local officials, Becker has apparently at least heard of the First Amendment, because the bill would not punish anyone directly. Instead, it basically requires anybody who wants to sing the anthem at a public event to waive any objection to being fined if they don’t do it right. The state department of education would get the job of establishing “standards and guidelines” as to what would be considered an “acceptable” performance of the anthem. (I have no idea what something like that might look like, but I look forward to mocking it one day soon.) Before someone could sing it at a public, school-sponsored event, he or she would have to review these rules and agree that, should the performance fail to measure up, the singer would pay a $25 fine to the school.

Becker says that the intent is not to punish bad singers or people who forget the words, but rather to deter people who deliberately sing a different version. The agreement better contain a pretty clear waiver provision, because in no way would this be constitutional otherwise. It would be a content-based restriction, maybe even a prior restraint, and The Supreme Court has held that the similarly dickish expressive conduct of flag-burning is entitled to First Amendment protection, and mangling the anthem should be for the same reasons. But it is possible to knowingly waive constitutional rights, so that’s probably the thinking here.

What it would likely result in, of course, is a sudden shortage of people willing to sing the national anthem, either out of protest at this goofy law or just because they are unwilling to risk $25 to see whether they measure up to whatever “standards and guidelines” the state comes up with. On the other hand, it might be more likely to encourage people basically to pay $25 in order to screw up the anthem deliberately, in just the way that laws against flag-burning have always resulted in lots more flags being immediately burned.

Schools would also be required to record every such performance and keep the recording for at least two years.

That’s as far as I got, and I can only assume that I planned to say something else about the recording requirement but ran out of time, or saw a squirrel or something, and never went back to it. But since I obviously save drafts for years, and for better or worse they also get lodged in my brain, this one at least has been resurrected.

And now it must be updated, of course. Surprisingly or not, the bill went nowhere:

She somehow talked somebody into co-sponsoring the thing, and then it seems to have quietly died in committee. I couldn’t find anything similar in the current Indiana Code, so if she tried again, that also failed.

With the Michigan law now gone, only Massachusetts and New Mexico appear to have laws on the books that make it illegal to mangle the Star-Spangled Banner. The Massachusetts law is similar to the one Michigan just ditched, including the super-odd prohibition on playing the national anthem as “dance music.” It also dates to 1917, so maybe that was a thing at the time. New Mexico’s law (in the section on “Sabotage and Disloyalty”), which dates back only to 1953, has no dance ban. “Improper use of official anthems” there is defined only as singing, playing or rendering them in public “except as an entire or separate composition or number,” so again no partial anthems or medleys. And it does say “anthems,” plural, because New Mexico protects its own anthem, “Oh Fair New Mexico,” with the same law.

Not that it makes any difference. Sing either one however you want, courtesy of the First Amendment.

What Not to Use as a Disguise, #3: Drywall Compound