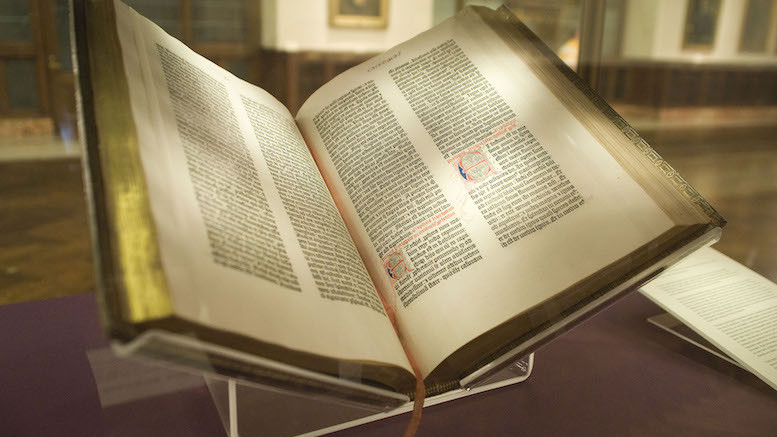 Either greatly irking the bills’ sponsors, or relieving them from having to justify the pointless and temporary laws that would result, the governors of Idaho and Tennessee both vetoed the official-Bible bills their state legislatures recently passed. (For previous mockery of those bills, see here [Idaho] and here [Tennessee].)

SB1342a was one of only two bills vetoed this session by Idaho’s governor, C.L. “Butch” Otter, who, according to this report, hardly ever vetoes anything. In his veto message on April 5, Gov. Otter noted that while he has “deep respect and appreciation for the Bible as religious doctrine as well as a piece of historic literature,” singling it out “for reference purposes” in public schools  would violate the state constitution and result in “costly litigation.”

The veto came just three days after Otter signed HB 1, which designated the Idaho Giant Salamander as the state’s official amphibian. As neither the federal nor the state constitution says anything specific about amphibians, a court challenge is not expected.

The bill’s sponsor, Sen. Sheryl Nuxoll, said she was disappointed in Otter’s decision (about the Bible, not the salamander) and noted that the bill had “passed with overwhelming support in the Legislature,” something that makes exactly zero difference when something violates a constitution, this being one of the reasons to have a constitution. If she meant to imply there were enough votes to override the veto, she’d be right about that, although again it would make exactly zero difference in the long run. (So far I’ve seen no evidence the legislature will try to override.)

As long as I’m back on the subject, I’ll mention a quote I left out the other day (unless you read the update I’m now cutting and pasting here instead, because who reads updates?). Rep. Vito Barbieri said at the time the bill passed that the Bible is different from other religious books because it’s “fundamental to the American way of life.” That’s true—depending on which Americans you’re talking about—but it’s not fundamental to the American way of government. Or at least less so than the First Amendment. Now, was this comment dumber than the one Barbieri made at a hearing last year, in which he asked whether a woman could swallow a little camera so doctors could conduct a remote gynecological exam? I leave that to you.

On April 14, over in <looks up capital of Tennessee> Nashville, that state’s governor vetoed the really egregious HB 615, which would have cut to the chase and made the Bible the official state book. Gov. Bill Haslam, who like Otter is a Republican, noted in his message that the state’s Attorney General had concluded the proposed law would violate the First Amendment as well as an express prohibition in the state constitution that forbids any legal preference for “any religious establishment or mode of worship.”

Haslam pointed out, as some also did in Idaho, that any way you look at it, this kind of bill is dumb. Well, he was a little more eloquent than that:

In addition to the constitutional issues, my personal feeling is that this bill trivializes the Bible, which I believe is a sacred text. If we believe that the Bible is the inspired word of God, then we shouldn’t be recognizing it only as a book of historical and economic significance [which sponsors claim they are doing to get around the constitutional issues]. If we are recognizing the Bible as a sacred text, then we are violating the [federal and state constitutions] by designating it as the official state book. Our founders recognized that when church and state were combined, it was the church that suffered in the long run.

Everybody can and should bring their beliefs “to the public debate,” Haslam concluded, but that’s very different from suggesting we have an official religion (or book symbolic of it).

So it turns out that, in both Idaho and Tennessee, there are actually grown-up human beings in government who are willing to do important grown-up things like respect the rule of law, even if it may be unpopular or not politically expedient in the short term.

But of course there are also the other guys, and two of them wasted no time at all in announcing they planned to fight on. Sen. Steve Southerland (R-Morristown) and Rep. Jerry Sexton (R-Bean Station), the Tennessee bill’s main sponsors, said they would be back at the pulpit no later than Tuesday to push for an override of Haslam’s veto. Polls show Tennesseeans are in favor of the bill, claimed Sexton, who apparently thinks that makes some sort of difference when you have a constitution.

According to the report, overriding a veto in Tennessee only requires a simple majority of both houses, which is kind of weird since that’s all it takes to pass a bill in the first place. HB 615 passed the House last year 55-38-3, and although it failed in the Senate that year, after it was resurrected (see what I did there?) for this session it passed 19-8-3. So even if the six no-shows show up and vote no, the votes are theoretically there to override. But maybe the 74 supporters have made their point. Or maybe they’ll try to make the Attorney General look like the ungodly one. We shall see.

Is it a coincidence that one of Sen. Southerland’s other successful efforts this year was a bill that makes it legal to let a jackass run amok? Until just now, I’d have said yes. But I’m not sure that can be explained by mere coincidence.

Feds: Body-Scanner Images Cannot Be Saved, Except for These 35,000