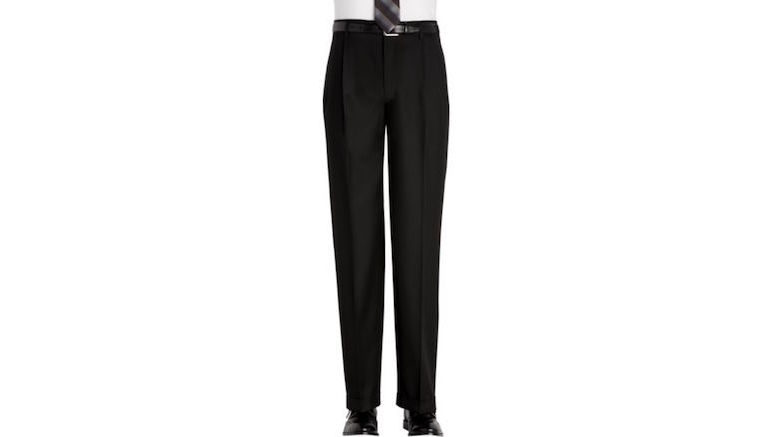 Not the actual pants

More than once I referred to the $65-million lawsuit Roy Pearson filed in 2005 over a missing pair of pants as the “gift that keeps on giving.” As I admitted in my May 2010 post, “A Farewell to Pants,” I had mentioned the case “as many times as I possibly could,” but alas, it then appeared to finally be over. How many posts did I devote to it, exactly? I ran a search to find out.

At least twenty-seven (not counting occasional offhand references). Hence the title of this post.

Let me try to summarize.

This was a titanic struggle between Roy L. Pearson, Jr., then an administrative-law judge in the District of Columbia, and his neighborhood dry-cleaning establishment. Pearson claimed Custom Cleaners lost a pair of his suit pants. Here they are, the cleaners said. Those aren’t mine, he said. It escalated. The cleaners offered to settle, but Pearson could not be satisfied. He refused settlement offers of $1,150, then $3,000, then $12,000 (for lost pants, remember). He eventually sued, alleging multiple violations of a consumer-protection statute; saying he was entitled to $1,500 per violation per defendant per day, he demanded $65,462,500. See “Lawyer Seeking $65 Million for Pants-Related Fraud” (Apr. 27, 2007); see also here for more on his math.

Later Pearson filed a brief changing the focus of his claim from the pants to allegedly misleading signs (“Satisfaction Guaranteed”), but he refused to dismiss the case. See “Judge Drops Pants; Suit Still On” (June 6, 2007). Sans pants, his demand was now a more reasonable $54 million. The case went to trial, and was every bit as ridiculous as I had hoped. See “Live-Blogging the Pants Trial” (June 12, 2007). Pearson called no fewer than nine witnesses, including himself; he wept on the stand; and claimed that he hadn’t wanted to litigate but felt the law “gave him no choice.” Nor did it give him anything else. See “Judge Who Lost Pants Loses Case” (June 25, 2007). He appealed.

The timing of all this was unfortunate, since Pearson was up for another term as an ALJ. Some (like the Washington Post) felt the matter called his judgment into some question. Eventually his employers agreed. Surprise! He then sued them for wrongful termination. (He only wanted $1 million for that.) He lost.

How did Pearson’s appeal of the pants case go? Well, from bad (at oral argument) to worse, ending in a unanimous decision that his claim was “not supported by law or reason.” Okay, but that was just one panel of the D.C. Court of Appeals. Surely the court sitting en banc would see things differently? Nope. I was on pins and needles hoping he would petition the Supreme Court or maybe take it to the International Court of Justice, but he did stop short of that, at least.

But he did appeal his loss in the wrongful-termination case. Now he claimed, among other things, that he had been retaliated against for pursuing a “public interest lawsuit” trying to benefit “thousands of consumers”—by which he meant the pants thing. This did not even persuade the D.C. Circuit to hear oral argument, which it cancelled, saying it would decide the matter based on the papers. See “Judge Who Lost Pants Forced to Rely on Briefs” (May 10, 2010). And later that month, it ruled against him, saying his quest was not so much in the public interest as it was “a personal vendetta against a dry cleaners over a pair of pants.” And that’s when I bid “farewell,” saying it might be the last time we heard of Roy, but “I wouldn’t count on it.”

In April 2015—more than a decade after all this started, and more than six after the pants case ended—D.C.’s Office of Disciplinary Counsel filed legal-ethics charges against Pearson, and on June 3 a  committee of the Board of Professional Responsibility agreed with two of them, which is why this is back in the news.

Not exactly a “rocket docket” there in D.C., as you may have noticed, and Pearson argued the delay was unconstitutional. A six-year delay is a little startling, but the committee found the delay itself hadn’t harmed him. And while it is tempting to say they should have just let it rest, it’s also worth remembering this was a lengthy and expensive vendetta over a pair of pants, based on the legal argument that a sign saying “Satisfaction Guaranteed” means the customer can make any demands whatsoever—anything at all—and the merchant has to agree.

As the committee’s report notes, Pearson is still insisting he’s right about this. At the hearing he argued the defendants were liable whether or not they actually lost his pants in the first place, and that he would have been entitled to a trillion dollars if that’s what it would have taken to satisfy him. In fact, he acknowledged that if there were any “reasonable limits” on the interpretation of “Satisfaction Guaranteed,” that would have “eliminated the basis” for his legal claims. That’s somebody who’s just not getting it.

The committee did not agree with all the charges, but it did agree that while his underlying argument was not totally insane, he had pushed it “beyond the bounds of reason” and had “interfered with the administration of justice” by doing so. It recommended two years of probation, so if he can go that long without making any frivolous arguments, he should be in the clear.

This assumes the board itself approves the report, and then of course that can be appealed. Maybe 12 or 13 years after the saga began, Roy will finally be vindicated?

I wouldn’t count on it.

Campaign Ads That May Never Be Topped, Although I Hope People Continue to Try