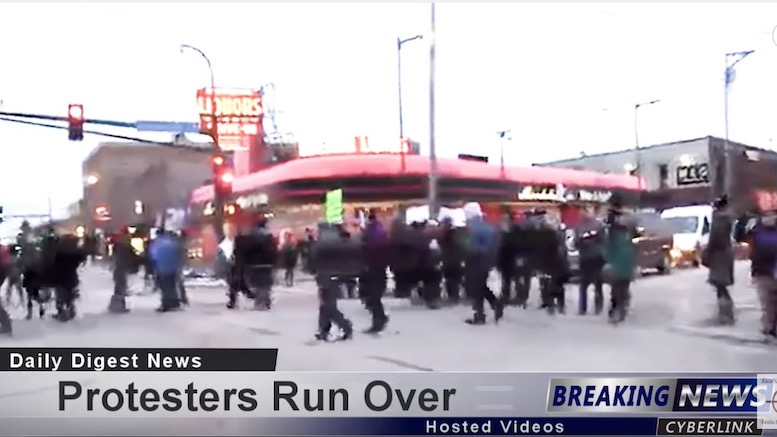 Just make sure the light's green

Finally someone is looking out for those Americans whose right to drive is constantly being infringed by protesters jumping out in front of their vehicles.  That someone is North Dakota state Rep. Keith Kempenich, who in an appropriate and measured response to the problem has introduced a bill that would make drivers immune from liability if they should, say, hit the gas instead of the brakes with a protester ahead.

Accidentally, that is. Intentionally murdering a protester would still be illegal.

House Bill 1203 would amend North Dakota’s Judicial Remedies and Motor Vehicle codes to provide that”[n]ot withstanding any other provision of law, a driver of a motor vehicle who negligently [or unintentionally] causes injury or death to an individual obstructing vehicular traffic on a public road, street, or highway” may not be held liable for any damages and is not guilty of a traffic offense. Granted, it just says “individual,” not “protester,” but there is some evidence that the bill is in fact intended to deter protests like those against the Dakota Access Pipeline. What evidence? Kempenich said it was:

“It’s shifting the burden of proof from the motor vehicle driver to the pedestrian,” said Rep. Keith Kempenich, R-Bowman, who admitted the bill is in response to the Dakota Access Pipeline protests in southern Morton County.

Emphasis added. There is also solid evidence the bill is needed to deal with the problem of the leaping protester. What evidence? Kempenich’s mother-in-law told him it was:

Kempenich said his mother-in-law, on a few occasions, was traveling south of Mandan and came upon groups of protesters gathered on and near roadways.

He said, on one occasion, about 100 cars were parked along a road in Morton County and his mother-in-law was passing through and slowed down. He said at one point an individual jumped out in front of the vehicle and was waving a sign.

His mother-in-law apparently was able to avoid killing this individual, but Kempenich said legislators should consider what might happen if someone like his mother-in-law panicked and hit the accelerator rather than the brakes in response to a sudden pipeline-protester incursion, or for any other reason, of course.

But mainly for that reason.

Seems doubtful this would be constitutional if it were to pass (and no one else quoted in the report seemed too enthused about it). By his own admission, the bill is a response to the Dakota Access Pipeline protests, and so (although the language itself is neutral) it is arguably a content- or even viewpoint-based restriction because the intent is to deter a certain kind of speech. If so, it would be subject to strict scrutiny and almost certainly struck down. (Note that it doesn’t require the “obstructing” to be illegal, so far as I can tell.) Even if you consider it content-neutral, it would still have to pass the rational-basis test. And it’s hard to see what the rational basis for this would be, or at least I can think of reasons it’s irrational.

First, a driver who hits someone who was obstructing traffic at the time can already argue that the pedestrian’s injuries were his or her own fault, and is likely to win at least to some extent. (Here’s a guy who hit a girl at a protest and got away with a misdemeanor plea, for example.) It’s hard to see why it would be necessary or even make sense to immunize a driver who couldn’t make that argument successfully.

Second, the bill doesn’t amend the criminal code, and so (for example) a negligent driver who kills someone could still be guilty of negligent homicide. So if the bill passed, that driver could get five years in prison and could be fined up to $10,000 for the homicide, but would not be liable at all to the victim and the killing would not even count as a “traffic offense.”

Third, if you want to deter people from obstructing traffic—assuming that to be the goal here—it seems a lot more rational to increase the penalty for obstructing traffic (assuming the First Amendment would allow that in this context) rather than to decrease the penalty for killing someone who does it. But I don’t know—rational basis doesn’t require much of a basis, so maybe the outcome would depend on arguing that strict scrutiny applies.

Or maybe the question is what Kempenich’s mother-in-law thinks about the First Amendment analysis. I can only hope she’s planning to testify if and when this gets in front of a committee.

How to Fail Your Driving Test