What could go wrong? Nothing *you* can foresee, that's for sure. (image: Bad Axe Throwing)

You’re out there somewhere.

You are the person who will say, “yes, it sounds like a good idea to go to a place that is full of drunk people throwing axes. That sounds like fun.”

And you won’t be wrong, at least about that last part. It does sound like fun, and people have fun doing it, which is presumably why Bad Axe Throwing is about to open a new location in Denver, its 12th. (The first nine were in Canada, because of course they were.) The concept is that your group reserves time at a Bad Axe Throwing location, brings its own beer and food, learns to throw axes from professional axe-throwing instructors, drinks, and then throws axes. Some locations, the company says, can accommodate more than 100 axe-throwers at once.

You can’t bring your own axes, for what the company’s website describes as “insurance” reasons. But you don’t have an axe anyway, because you’ve never thrown an axe or really had any significant experience handling sharp things at all. To be honest, you’re kind of a klutz.

This will not deter you.

You will go, and despite the instruction you will receive, the safety rules that are in place, and the fences around each axe-throwing area meant to help ensure that someone—well, someone like you—doesn’t wander out into the space through which axes are being thrown, you will be injured.

You may not be injured by an axe throw, of course. Maybe you’ll drop the axe on your own foot, or smack yourself in the forehead with the back of it while trying to throw, or whack yourself in the leg because you were afraid to let go. Maybe you’ll walk into someone else’s axe because you weren’t paying attention. Maybe you’ll cut yourself while jokingly pretending to “shave” with the edge of the axe, or reenacting something funny that Gimli did in Lord of the Rings, or would have if Jackson had included that fan-fiction piece you sent him. Yeah, that sounds like the kind of thing you would do, actually. It’s always Gimli this and Gimli that, but this time you had a real axe in your hand, and guess what?

One way or another, you’ll get hurt.

And then you will sue. 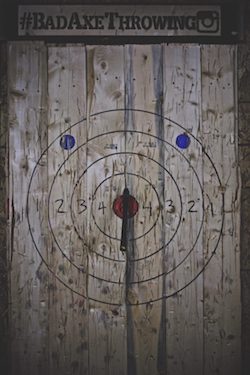 The axe you probably tried but failed to catch in flight (image: Bad Axe Throwing again)

You will sue despite the fact that the potential risks of being in a room where a bunch of drunken novices are throwing axes around should be fairly obvious. Maybe you’ve heard of the “assumption of risk” doctrine, maybe you haven’t. (Well, now you have.) You will point out, probably, that there is no warning on the company’s website saying not to do whatever it is you did, or if there is a warning about that, you didn’t see it. You will argue that they didn’t have a disclaimer form for you to sign; or if they did, you didn’t sign it; or if you did, you didn’t read it. You will consider arguing that the instructors aren’t qualified, but you probably won’t because one of them is actually named “Thor,” and a jury would never believe a guy named “Thor” isn’t qualified to teach axe-throwing.

Well, maybe you’ll argue that Thor is only qualified to throw hammers. Yeah, that sounds like the kind of thing you would do, actually.

You won’t be able to point to any previous injuries that should have put the company on notice that its procedures weren’t adequate, at least assuming the statement on its website that “we have never had anyone hurt or injured in any way” is accurate. But you will probably note that the company also describes the activity there as “completely safe,” which we can agree it probably shouldn’t do, and you’ll point out that its statement on this page that “[u]rban axe throwing outlets pride themselves on maintaining outstandingly low incident rates” is not entirely consistent with “completely safe.”

You will allege that the discrepancy in these statements confused you, although later you will admit under oath that you never read either one.

To be fair, it is not impossible that you might be injured in a way that could be fairly traceable to something the company did wrong. The risks of drunken axe-throwing are obvious, but could be increased in some non-obvious and unreasonable way, I suppose. It just doesn’t seem very likely that you would be able to sue for that or any other reason. What does seem likely, though, is that you will go ahead and give it a shot.

So here’s to you, Future Plaintiff in Lawsuit Against Axe-Throwing Business. Whether or not your brave but probably futile quest for liability gets you any settlement money, it will very likely provide me with material for a future post.

And for that, I salute you.

What You Need to Know About Haunted-House Law

Court Rules Punch to the Groin Was No “Accident”

Brazilian Boy Will Not Be Allowed to Enter Law School