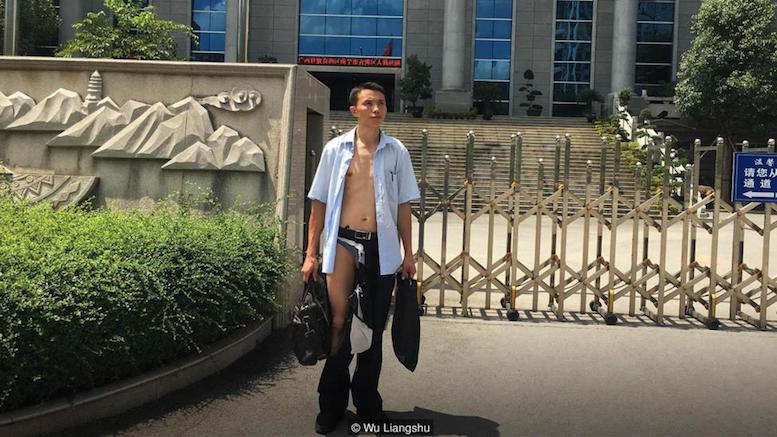 Wu Liangshu, who tried to use his cellphone in court

What is it that’s funny about pants? I really have no idea. Maybe nothing. Roy Pearson’s pants would not have been funny (or relevant), had he not sued the dry cleaners that allegedly lost them for $65 million. Saggy pants would not be funny (or relevant), if people didn’t get so worked up that they insisted on passing laws on the subject, or suggesting it might be a religious issue. Of course, maybe it’s just me, a hypothesis that is supported by the fact that I just searched my site for “pants” and got 19 pages of results.

Some of those don’t have much to do with pants per se, of course, such as the 2006 post “Don’t Prejudge My Client Simply Because He Is Covered in Blood,” which just happened to contain the word “pantsless.” But 19 pages does seem like kind of a lot.

Still, I do have several pants-related items on the list, so my compromise is to combine them all in a single post. You’re welcome.

First, a lawyer in Guangxi, China, claimed last month that court officials violently attacked him and tore his clothes after he refused to hand over his phone for inspection, a story that does seem to be supported by the photo above. If so, that is of course an outrage, although I think it’s still possible to believe the BBC was a bit over the top here:

The result is an astonishing image that, through the aperture of Western aesthetics, seems to echo the choreography of many depictions of the soon-to-be-crucified Christ, arrested, man-handled, and frog-marched to judgment before the high priest. While the secular photo of Wu is necessarily stripped, as it were, of any religious connotations, his violent disrobement within a farcical arena of cynical state justice is nevertheless a culturally shared posture – one that locates Wu in the tradition of memorable portrayals of Christ …

Okay. I’d have gone with a comparison to the guy who stood in front of the tanks in Tiananmen Square, so apparently I’m not looking through the aperture of Western aesthetics.

Second, the Seattle PD reported back in May that detectives had arrested a suspected bank robber “after he left behind a key piece of evidence: his pants.”

On May 14th, the suspect walked into a bank … and passed [a] note, demanding cash from a teller. Police arrived shortly after the robbery and searched the neighborhood but weren’t immediately able to find the man.

About an hour after the robbery, a … resident contacted police and reported that a suspicious man had been pacing back and forth behind an apartment building …. The man was gone when police arrived …, but officers found a pair of pants at the scene, matching those worn by the bank robber. Inside the pants, police found a wallet and an ID card for a man, who bore an uncanny resemblance to the bank robber captured on surveillance cameras hours earlier.

He was arrested a few days later. At least he didn’t leave them at the scene of the crime, although that doesn’t make this any less baffling.

Third, as a number of you pointed out, women may want to consider wearing pants in Georgia until next year, now that the state court of appeals has ruled that “upskirt photography” is not illegal if done in public, or at least it’s not a violation of the state’s invasion-of-privacy law. The creep in question was charged under section 16-11-62, which makes it unlawful to “record the activities of another which occur in any private place and out of public view….” He did this in the aisle of a grocery store. Does that law apply? The trial court said it does, the court of appeals held 6-3 that it does not:

The dispute in this case centers on how we should read the term “private place.” Specifically, the question is whether, reading OCGA § 16-11-62 as a whole, we may logically read “private place” as including a particular region of a person’s body. At the time of Gary’s alleged crime, the Invasion of Privacy Act defined “private place” as “a place where one is entitled reasonably to expect to be safe from casual or hostile intrusion or surveillance.”

“Underneath your skirt” sure seems to qualify, but the majority decided that the term couldn’t refer to an area of the body because it’s not used that way in other parts of the statute, e.g., a conversation originating “in any private place.” Regrettable, it admitted, but up to the legislature to fix (which can’t happen until next spring).

The dissenters did not think the language was ambiguous at all, however. Although their “scathing” opinion put it somewhat differently, they would probably agree with this woman (image clipped from the CBS report linked above): 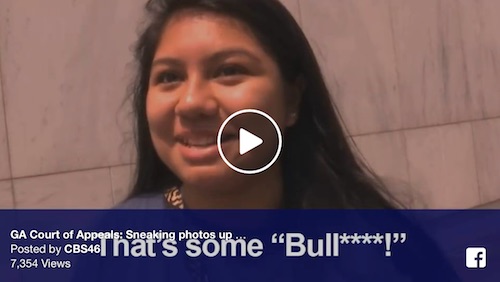 Seemed to be the general reaction on social media as well. Interestingly, or not, both the majority and dissenting opinions were written by women, so make of that what you will.

Finally, this just in: corrections officers in Louisville who allegedly refused to give a woman any pants (or a jumpsuit) to wear while in custody, although she had a court appearance scheduled, got a call from the bench asking them to explain themselves. “Am I in the Twilight Zone?” Judge Amber Wolf asked whoever was unfortunate enough to answer the phone over at the jail. “What is happening? This is outrageous!”

A spokesman for the corrections department argued it had done nothing wrong because the woman only appeared to be wearing no pants under a long T-shirt; in fact she was wearing shorts. (Which are, of course, not pants.) He semi-criticized the judge for calling without confirming the pants deficit, but conceded that “[i]f we had taken somebody over with no pants on we should be held responsible. We didn’t.” Which is sort of true.

Not surprisingly, I guess, I have yet more pants items saved up, but a thousand words on the subject seems like more than enough for today.