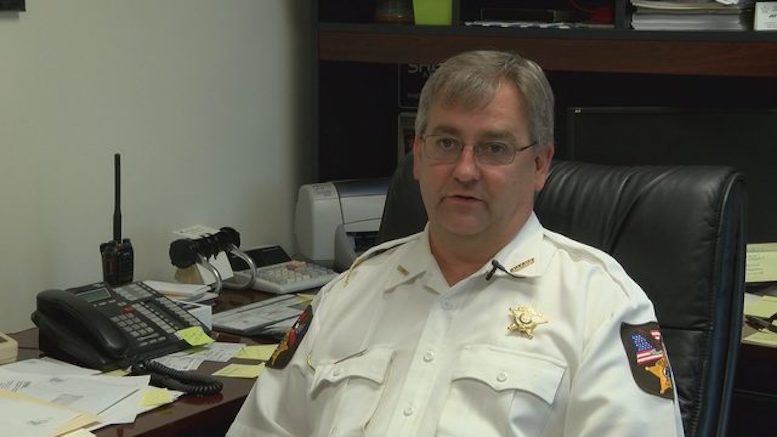 Sheriff Jeff Hobby, who thinks "personal searches" of children are legal as long as the principal's in the room (image: WALB.com)

I don’t have kids, but I have a dog. I don’t mind if somebody pets my dog. He’s a dog. But if somebody touched my dog “inappropriately,” I would, to put it mildly, freak out, and would if possible use fairly drastic means to separate that guy from my dog and then the limb that touched my dog inappropriately. Most likely, any witnesses to this event would either help me do that or applaud afterward (or both). Because what kind of creep does that to a dog?

Like I said, though, I don’t have any human children, so maybe that’s different?

Not according to this lawsuit, filed June 1 in a Georgia federal court. (Thanks to Scott Greenfield for the link and his post, “The 900 Gropes.”) The complaint begins, “[t]his is a civil-rights action … arising from a mass search of 900 students at Worth County High School at the direction of Worth County Sheriff Jeff Hobby.” It alleges that in April, Hobby and about 40 other officers “placed the high school on ‘lockdown’ for four hours,” halted classes, seized students’ cell phones, and conducted a “drug sweep” that involved searching all students, their clothes, bags, classrooms, lockers, and cars. In fact, the complaint says this involved “a hands-on body search” of every student and a degree of inappropriate touching that makes the TSA look like … well, like the TSA at its worst, I guess, but see paragraphs seven and 53–61 if you wish to create your own metaphor.

According to news reports, the sheriff said “several juveniles” were arrested in March for a series of burglaries, and an investigation found unspecified evidence of “drug activities going on at school.” There was a search of some kind at the school on March 17, which found nothing. But Hobby said he “didn’t think that search was thorough,” so he decided to do his own. The report says police brought drug-sniffing dogs, that each student was patted down, and that students and parents claimed the students were “patted down aggressively.” It also states that this search, too, found nothing. In a press release, the sheriff claimed he told officers to “perform a basic and nonintrusive pat down of each student,” and that later “it was discovered [passive voice] that one of the deputies” exceeded those instructions. We shall see. But according to the reports, Hobby also said that in his view a “personal search of the children was legal” as long as “a school administrator was present.”

Students get Fourth Amendment protections, although the protection is reduced because of the need to “maintain order in the classroom….”  See New Jersey v. T.L.O., 469 U.S. 325 (1985). But students do have some legitimate expectation of privacy, the Court held, although the majority’s expression of that was perhaps not the most ringing endorsement of that principle: “We are not yet ready to hold that the schools and the prisons need be equated for purposes of the Fourth Amendment.”

So what rules do apply to these not-yet-imprisoned children? Well, school officials do not need a warrant. They also do not need probable cause. But a search or seizure must at least be “reasonable” under the circumstances, the same standard that applies to stops under Terry v. Ohio and requires police to, at a minimum, point to “specific and articulable facts” showing they acted reasonably. That ain’t much, but it’s something.

The Court applied this standard in 2009 when it held that school officials violated the Fourth Amendment when they searched a 13-year-old girl’s underwear because they suspected she had given out ibuprofen. (Oh, does that not strike you as a substance worthy of panic? I should have mentioned it was prescription-strength ibuprofen.) Safford Unified School Dist. No. 1 v. Redding, 557 U.S. 364 (2009). The Court still held that searching her outer clothes and a backpack was okay, just that the strip search itself went too far.1 It decided those officials should get qualified immunity, because it supposedly wasn’t clear at the time that T.L.O. would prohibit this.

But it is clear now. And that’s bad for the gropers in this case, assuming the evidence shows they groped. Even if the alleged burglary evidence provided a reason under T.L.O. to search a limited “target list” of students, that wouldn’t justify searching all students, which even the sheriff seems to concede happened. Nor would it justify strip-searching or groping even the targeted students, unless police had specific facts leading them to reasonably believe the students were carrying something more dangerous than ibuprofen in their pants. Redding does not seem to leave any wiggle room here:

We do mean … to make it clear that the T.L.O. concern to limit a school search to reasonable scope requires the support of reasonable suspicion of danger or of resort to underwear for hiding evidence of wrongdoing before a search can reasonably make the quantum leap from outer clothes and backpacks to exposure of intimate parts. The meaning of such a search, and the degradation its subject may reasonably feel, place a search that intrusive in a category of its own demanding its own specific suspicions.

If the complaint’s allegations are true, therefore, then as Radley Balko put it, “Worth County had better hope its insurance is paid up.”

1 Except for Justice Thomas, that is, who stuck to his view that school officials can do virtually anything they want to students because that’s the way it was in 1789. If you don’t like it, he explained, move to another district. I can’t resist also pointing out that this was the case in which Justice Breyer said at oral argument that “In my experience, people did sometimes stick things in my underwear,” though that might or might not have been just a hypothetical.

TIP: Giving Birth Likely to Be Considered Good Reason for a Continuance