The important part of the Lee Declaration, July 2, 1776 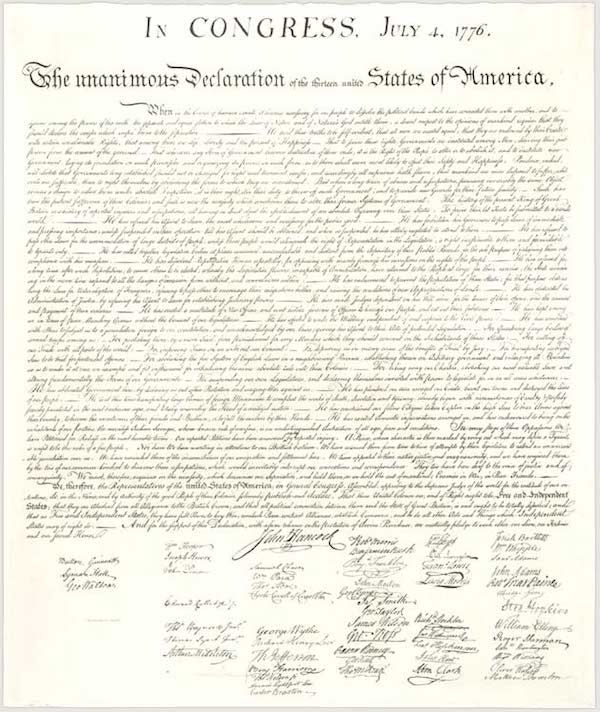 —isn’t the Declaration of Independence. It’s a copy made by William J. Stone in 1820, which the government commissioned him to make because the original was basically falling apart even then. It’s well protected now, but according to the National Archives’ history of the document, it took some abuse early on, partly because Congress had to keep moving it (and themselves) to avoid the British. It probably had at least seven different homes during the Revolutionary War, and then of course they had to move it again in 1814 for the same reason as before.

Less impressive than it once was

Also, they kept making copies, which is understandable, but horrifying given that it was common at the time to make “press copies,” which “were made by placing a damp sheet of thin paper on a manuscript and pressing it until a portion of the ink was transferred.” Egads! Stone may actually have used this “wet transfer” process when he made his copy, which makes it a pretty good copy but may have jacked up the original. That is in sufficiently bad shape that many of the signatures are illegible at this point.

Which is fine, because they weren’t there to begin with.

Arguably, the real declaration of independence was on July 2, 1776, when the Second Continental Congress voted to adopt the Lee Resolution, which is the thing in the first picture up above. By that time, Congress had already created an army, a currency, and a post office, among other things, which generally aren’t things you do if you don’t already feel independent. But there hadn’t been a formal declaration yet. Jefferson, Franklin, and Adams (but mostly Jefferson) were working on the capital-D declaration, but Lee’s resolution was already pending, so Congress went ahead and voted on that. (This is all according to the Archives article—there are of course whole books on the Declaration, because it’s like famous or something, but I haven’t read them.)

Jefferson then presented his rough draft to Congress, which spent the next two days revising it. (Among other things, they took out a comment about the King allowing the slave trade to continue, because … awkward.) If you’ve ever written anything that’s then been revised by committee, you know just how irritating that can be, and Jefferson was duly irritated. But such is life. Anyway, on July 4, they had hashed out the final version, and voted to adopt it. Hurray!

They did not, however, all sign it on July 4. Which seems a little weird because, after all, it says “July 4, 1776” at the top and has a whole bunch of signatures at the bottom. But in fact it is still unclear who exactly signed it that day, if anyone. Jefferson and Adams both insisted lots of people signed it that day, but another delegate later insisted nobody signed it that day. If there was a signing, they forgot to mention it in the journal entry:

And as that also shows, there wasn’t even a formal copy yet—it still had to be “authenticated and printed.” After all, they couldn’t just click “Print,” so unless everybody gathered around to sign the final marked-up document, which seems unlikely, they need to get a scribe involved. They did have somebody print up copies that could be distributed quickly; that happened on July 5, but only two names (the President and Secretary of the Congress) were on the printed copy. (By the way, only 26 copies of that thing are known to exist. If you find one, it’s probably worth upwards of $8 million.) But there was no “fairly engrossed” copy on parchment until August, and most of the signers signed that on August 2, some not until later. Maybe somebody did sign something on July 4, but if so, that thing no longer exists.

It doesn’t really matter, of course, because the Declaration itself has absolutely zero legal significance. We were already acting and claiming to be independent before July 4, 1776, and if we hadn’t somehow managed to win the war, all those signatures would have accomplished is to provide a handy list of people to hang. But we did, and even though the Declaration still has absolutely zero legal significance, it has of course developed enormous symbolic significance.

At a minimum, it got us a four-day weekend this year, and for that, at least, let us salute the wisdom of the Founders. The success of their little experiment here seems doubtful at the moment, but fireworks are cool.