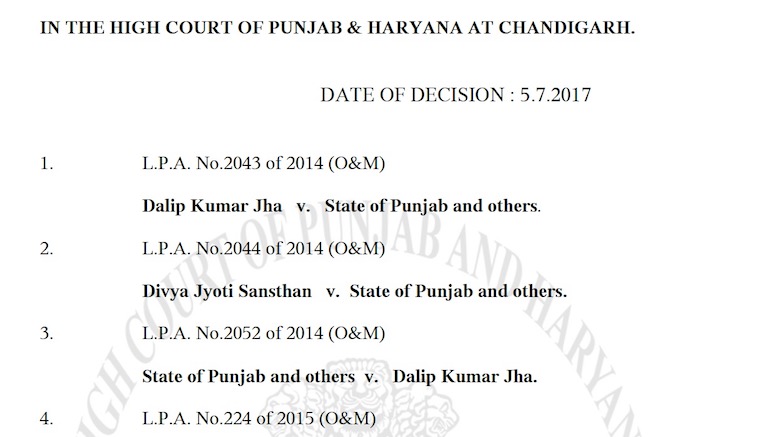 Big news out of India: the High Court has finally reached a decision in the case of His Holiness Shri Ashutosh Ji Maharaj (The Guardian, BBC).

Not that the case was especially time-sensitive, because, as you may recall, His Holiness has been frozen solid since 2014.

Ashutosh was the leader of a religious group until January 2014, when—depending on who you ask—he either died or got really serious about meditating. See “Court to Decide Whether Guru Is Dead or Just ‘In Deep Meditation” (May 29, 2014). Either way, his physical form was deteriorating, so his followers changed the locus of meditation to a large commercial freezer unit. Later that year, a court held that he was, in fact, dead, and that his son should be allowed to have him cremated. That order was stayed pending appeal, which has been pending for years. See “Frozen Guru Update” (Jan. 5, 2015); “Frozen Guru Update II” (June 18, 2015); “Frozen Guru Update III” (Sept. 7, 2016); and “Frozen Guru Update IV” (Apr. 3, 2017).

On July 5, the appeals court held in favor of the guru’s followers.

As you may also recall, figuring out what an Indian court is saying can be nearly impossible. See, e.g., “Luxuriate in the Octopoid Embrace of These Legal Postulations” (Feb. 15, 2017). The order here isn’t that octopoid, but still requires decryption. The lower court’s summary of the issues, at least, was relatively clear:

This Court has been called upon to adjudicate … whether the belief and practice of the followers of spiritual personality Shri Ashutosh Ji Maharaj that he has been in the state of “Samadhi” despite having been declared clinically dead, would constitute an essential and integral part of religion for claiming the protection under Articles 25 and 26 of the Constitution of India. Dalip Kumar Jha, petitioner, has approached this Court for enforcement of his religious belief that being son of the above said Godman, he has got to dispose of the body as per the religious rituals.

So both sides invoked freedom of religion. In societies that care about that kind of thing, disputes like these can be very difficult. Courts are not supposed to take sides or rule on whether a religious belief is “true,” and they usually try hard to avoid that, even when the group in question is Scientology, for example, the core beliefs of which are hilariously false. There is also a general principle, at least here in the U.S., that courts should avoid deciding constitutional issues if possible. And that’s what should have happened here.

That’s because Mr. Jha has yet to come up with any solid evidence that he is actually the son of the above said Godman. Fortunately or not, you can’t just go around having random people set on fire. And the State is supporting the status quo, at least for now, so if Jha doesn’t have standing, it sounds like nobody does. But the High Court decided it wanted to write more words:

There is indeed a tempting argument [it conceded] that once the learned Single Judge concluded that Dalip Kumar Jha … had no locus [standing], there was an occasion for the Court to give a quietus to the controversy…. Tempting it may be, but we are of the opinion that the learned Single Judge was right in seizing the moment when constitutional issues of practices, personal beliefs and the shield of Articles 25 and 26 of the Constitution were raised….

Again, if nobody has a locus, a court really should be quietus. This court’s refusal to do that makes the opinion about 40 pages longer than it needs to be, but of course I have mixed feelings about that. Because having decided to go on, the court then said some ridiculous things.

First, it criticized the lower court for finding that Ashutosh was dead. “[S]uch facts need more scientific inputs,” the court wrote, “than an examination of a body in post-mortem or autopsy can alone determine….” Really? I think most would agree that even if a guy isn’t dead before the autopsy, he’s pretty much dead afterwards. Here the guru had been declared clinically dead, autopsied, and then frozen solid for almost a year (at that time), so I personally would have been comfortable taking judicial notice of his deadness. But let us not be too hasty, says the High Court.

Its real concern, though, is the constitution’s protection for freedom of conscience and religion, similar to our First Amendment. This is important stuff. Indeed, the court says, Article 25 “is the most fragrant in the bouquet of fundamental rights.” (I will pay $1 to the first lawyer to send proof he or she filed a brief describing the First Amendment that way.) Is samadhi fragrant enough to be protected? Here’s some of what the court says about that:

It is known to be the “Final Initiation” also termed as “ascension” where the practitioner abandons the physical body to achieve an elevated stage…. There would be examples where … practitioners … would [enter] this state albeit for a limited period and while being in Samadhi would offer no symptoms that the medical practitioner [would] acknowledge as essential to life.

The Court does not wish to be seen as an advocate or an adherent to the concept of Samadhi to propagate its acceptability. Suffice it to say that the concept and belief of Samadhi in fact, does form an essential part of mythology and religion around which a large part of Hindu/Indian philosophy revolves. One cannot therefore, accuse the [followers] of harboring or practising a belief which is shockingly deviant from the generally accepted societal beliefs or as seemingly absurd to a rational mind.

Well, there are plenty of not-shockingly-deviant beliefs out there that are still “absurd to a rational mind.” I guess what the court is doing here is asking whether the asserted religious belief is “sincerely held” (as a U.S. court would say). The answer to that is surely yes, at least where samadhi is concerned. But again, here we have a guy who has been in a freezer for three years, not just really quiet for “a limited period.” And the court admits that enfreezement is not a “core belief” even of this particular sect:

It is also to be understood that preservation of a body is not the core belief of the … followers of the Maharaj, who live and die as ordinary mortals, with their bodies being disposed of in the customary Indian way. Their belief is in the word of their spiritual Guru that he has taken Samadhi and is in a state of ‘ascension’ and equanimity, but the Guru intends to return to live in the same body for which preservation is essential. Destruction of the body will render this course impossible…. Their belief stems from their unshakeable and unimpeachable faith in their Guru which is foundational…. The outside world in turn would never learn about the truth of Maharaj’s proclamation of being in Samadhi unless someone from the [group] vomits truth to the contrary.

Hold up—what was that last part?

I think the court is trying to say that, since Jha doesn’t have standing, whether the Guru is “meditating” or “dead” is something only the followers have the right to determine. We wouldn’t even know they were wrong unless one of them were to admit it by “vomiting the truth.” But again, I think we have enough facts to make a call there. In short, if there were anyone with standing, I don’t think it would violate freedom of religion to hold that the freezing part—not the concept of samadhi itself—isn’t something entitled to protection. But if nobody has standing, the courts should just butt out.

Ultimately, that’s what the court does anyway, by saying it won’t get involved unless the legislature passes a relevant law, or something else changes:

The courts would thus be wary of wading into the correctness of beliefs and decline an invitation to a circus if they do not wish to drown themselves in the vastness and boundlessness of a sea of speculation unless there is a law or a statute which permits them such evaluation….

We thus find ourselves in a piquant situation where in the absence of any law or obligation flowing therefrom, to give any directions to dispose of the body even if one were to venture considering to do so, without impinging on the belief of the [followers] and violating the provisions of Article 25 of the Constitution of India.

Arguably, the court should have stopped writing well before this last sentence, which isn’t a sentence, and also I don’t think “piquant” is the word they want there. But again, I will cut these judges some slack because of this sentence, on page 40:

We would hence decline to invade the sacred territory of personal beliefs and faiths and disagree with the learned Single Judge and his mandate to dispose of the body unless there is cogent material to show its degeneration or the issue snowballs into one of public health, order or morality.

Snowballs! I think there is some hope for the Indian judiciary after all.

Is this the end of the matter? Of course not. Both sides will appeal, which means there will one day be an absolutely splendid and probably baffling opinion by the Indian Supreme Court. In the meantime, though, the court has ordered that Mr. Jha get the opportunity for DNA testing, and if that proves his claim, then I think this case comes out differently. So, ironically, it may be science that ultimately vomits forth the truth in this matter.

Your Behaviour Is That of a Lunatic, Your Honor

Never Bring a Chainsaw to a Gunfight