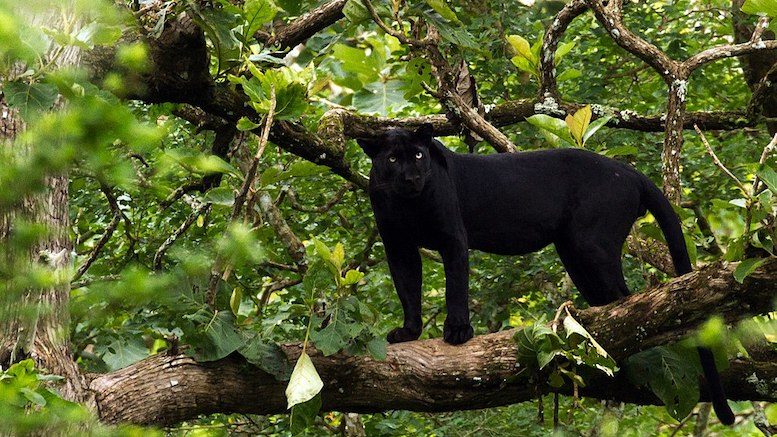 I suppose an “assumption of risk” category is long overdue here, but in any event, welcome to the first official member of that category.

Others will be added retroactively, nor is this at all likely to be the last one.

According to numerous reports today, a 50-year-old Florida man has filed a lawsuit alleging that he was mauled by a leopard at an animal sanctuary, and that the owner is responsible for allowing him to have full contact with this dangerous animal.

This is even though he not only asked for full contact with this dangerous animal, he paid $150 to get it.

According to the reports, Michael Poggi, who owns Poggi’s Animal House—though its Facebook page is now offline—promised the man a “full-contact experience” with a black leopard, said experience to include the opportunity to “play with it, rub its belly and take pictures.” But, as a reporter says with an entirely straight face in the video on this page, the man now claims that “when he signed up for this one-on-one experience with a leopard, an attack was not part of that plan.”

It probably was not part of the leopard’s plan, either, it’s just the kind of thing leopards do. They might let you play with them and rub their bellies, or they might try to rip your scalp off. They’re unpredictable that way, something I think is pretty widely known. The Florida Fish and Wildlife Commission apparently believes this, at least, because leopards are considered “Class I wildlife” in Florida, along with other animals that “pose a significant danger to people” and, potentially, their scalps. In addition to leopards, Class I includes tigers, lions, bears, rhinos, most crocodiles, komodo dragons, and apes such as chimpanzees, which may wear funny hats on TV but in real life might try to eat your face. Under Florida law, you must have a permit to exhibit any of these animals to the public, much less allow the public to hug them.

The reports say Poggi did have a permit, but that is not likely to help him. Under state regulations, “full contact” with Class I wildlife is allowed only in specific circumstances, and where “Class I cats” like Panthera pardus are concerned it’s limited to those weighing 25 pounds or less. That’s about what my Boston terrier (Canis familiaris) weighs, and the only real risk he poses is to his sibling housecat (Felis catus). This leopard was bigger than that, and this is presumably why the reports say Poggi was charged with “allowing full contact with an extremely dangerous animal.” He’s probably liable for negligence (per se) based just on the regulatory violation alone.

That brings us to the assumption-of-risk doctrine, which as you know (or should know by now, despite the prior lack of an official category), deals with what happens when people confront known risks and then are injured by that very same risky thing. In some states, and in some circumstances, this may be a complete defense, and that’s often called “primary assumption of the risk.” In other states or circumstances, it’s not a complete defense, just something the jury can take into account when applying “comparative negligence.” In other words, the case would go to trial but the jury could find the plaintiff had some percentage of responsibility, and would discount any recovery accordingly. That is often called “secondary assumption of the risk,” and it appears to be the law in Florida.

The Florida Court of Appeal recently considered a case involving a dog collision—the dog accidentally ran into the plaintiff hard enough to break her leg—and an assumption-of-risk argument. Davison v. Berg, 243 So. 3d 489 (Fla. Ct. App. 2018). The trial court granted summary judgment for the defendant, noting that signs at the dog park’s entrance said dogs might engage in “rough play and chasing” behavior and that one entered at one’s own risk. The plaintiff was aware of these signs, had signed a form acknowledging the risk, had actually seen a dog break someone’s leg at the park a year before, and, “moments before her own collision, she noticed dogs chasing each other and stated, ‘This looks like leg-breaking territory. I better get out of here.'” (Emphasis added.) Perhaps understandably, the trial court found that this showed the plaintiff had assumed the risk of injury, opining that this evidence was “about as strong as we could ever have.”

Agreed. But the Court of Appeal reversed. While it conceded that “there may be evidence to support the trial court’s conclusion”—a fairly dramatic understatement—it held that in Florida an “assumption of the risk defense cannot bar liability. Rather, [the facts must] be presented to the jury for a determination of comparative negligence….” You could argue, and I assume the defendant did argue, that on facts like these no reasonable jury could assign any responsibility to the defendant. But the court held that under Florida law, that case had to go to the jury regardless.

Dog cases might be different, though, because while Florida statutes make a dog owner strictly liable for the dog’s conduct, they also say there is only one “total defense” to this: that the owner posted an easily readable sign that—and this is true—specifically “includ[ed] the words ‘Bad Dog.'” (Courts have unfortunately held that something like “Beware of Dog” is good enough, though the law is quite specific.) So the court seems to have reasoned that because the legislature provided only the “Bad Dog Defense,” a common-law defense like assumption of risk could not also be available.

There is no similar leopard statute, but owners of wild animals are generally also strictly liable for any injuries those animals cause. But precisely because there is no statute, we can’t infer that the legislature intended that only a statutory Bad Leopard Defense would be available. So it is possible (I don’t think it’s clear, so please consult a Florida lawyer before engaging in any leopard-related activity) that Poggi might still have a primary-assumption-of-risk defense available. Certainly the plaintiff’s lawyer is arguing otherwise, and he could be right. More likely, based on Davison, Poggi could argue at trial that the plaintiff assumed at least some of the risk involved in tickling a carnivore, so any recovery should be reduced by some percentage.

Given the facts here, possibly a very large one.

Wexler: Scalia Got the Most Laughs Again This Year

Alleged Arsonists Say They Set Fires to Get Rid of Snakes