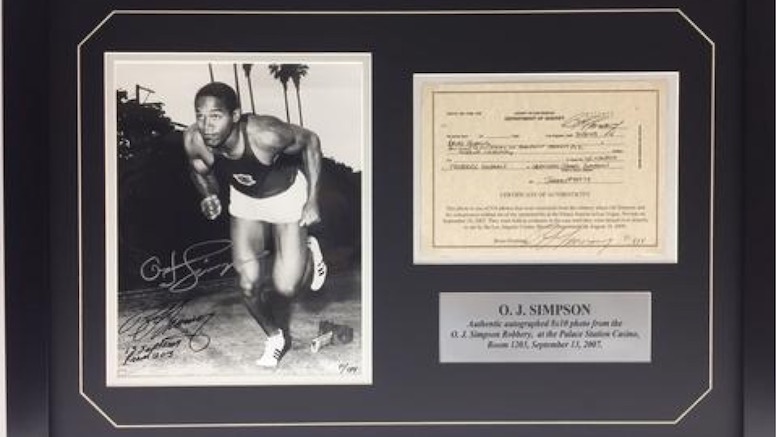 According to an email I got the other day, the item pictured above is from the 2007 incident in Las Vegas that resulted in jail time for O.J. Simpson. He didn’t kill anybody that time (or, technically, at any other time), but was charged with armed robbery, kidnapping, and assault after he and some cronies showed up with a gun to “recover” some memorabilia Simpson claimed still belonged to him. (Simpson was sentenced to 15 years in prison, but as you likely know, he was recently paroled.)

This is allegedly one of those very items, signed not just by O.J. Simpson but also by Bruce Fromong, the man from whom O.J. was convicted of stealing it. I thought it was worth mentioning because it’s not every day you see a memorabilium signed by both the criminal and his victim.

You’re also probably thinking, it’s not every day you see the word “memorabilium,” and that is true, because according to the Oxford English Dictionary, there is no such word. “Memorabilia” is a real word, although the OED snootily claims that the British usage, which seems closer to “memoranda,” is “now rare,” and that only in the U.S. does it have the crass meaning of “objects kept or collected because of … the memories they evoke.” No singular form is listed. The OED does of course contain “memento,” which it defines almost identically as “an object kept in memory of some person or event, a souvenir.” But the plural of “memento” is “mementos,” so that isn’t the answer. Google searches for “memorabilium” basically turn up only the Latin form of the word, but that’s a plural adjective form (e.g., libri ac dictorum memorabilium = “book of memorable sayings”).

Some sources suggest the word “memorabile” (mem-o-RA-buh-lee) should be the singular of “memorabilia,” including—sort of—the OED. It’s “probably” that, the editors say, but they not only call it “rare,” they give only one example, from 1824, and say even that is probably a misprint. Plus, if you walk into a shop and say that you “wish to purchase an intriguing mem-o-RA-buh-lee,” you’re just going to get beaten up. So, I guess just use “memento.”

Anyway, this particular memento is, according to Bruce Fromong’s statement on the certificate of authenticity, “one of 534 photos that were recovered from the robbery where OJ Simpson and his conspirators robbed me of my memorabilia at the Palace Station in Las Vegas, Nevada, on September 13, 2007.” (It’s number 91 of 534, in fact.) Fromong says the photos were held “as evidence in the case” until August 2009, when they were turned over directly to him by the Los Angeles County Sheriff’s Department.

But obviously, Los Angeles County isn’t in Nevada, and equally obviously, this is just the sort of trivial mystery I feel obligated to solve for some inexplicable and unfortunately nonbillable reason.

The form at the top of the certificate actually refers not to the Nevada case but to the California civil case by the Goldman family against Simpson—you know, the one where a jury found by a preponderance of the evidence that he did in fact commit two murders. That verdict was in 1997, but, perhaps unsurprisingly, O.J. never paid the judgment. The Goldmans filed a motion to renew the judgment in 2006 and won an appeal related to that motion in February 2008. Simpson was convicted of the Nevada crime in October 2008, so the photos could then have been transferred to L.A. as part of the Goldmans’ continuing efforts to collect.

Although Simpson presumably doesn’t own the photos—after all, he was convicted of stealing them—there could have been a dispute over who did, which might have required the photos as evidence in the California case. That all seems entirely possible to me, and if true then the only issue with the certificate is that “in the case” should be clarified.

After writing the above, I emailed the company involved (Inscriptagraphs) to ask about this, and a representative just responded, confirming (ta-da!) that my guess was basically right. According to the company, the Goldmans asked for the photos once Nevada was done with them, because if they belonged to O.J., the Goldmans were gonna take them away. But Bruce Fromong was eventually able to prove they belonged to him, Inscriptagraphs says, which is really what he’s certifying for purposes of sale. So good news, if you’re interested in this—the certificate could be worded better but it sounds like the memorabile/ium is legit. Update: see also “Most of stolen O.J. memorabilia headed to California,” Las Vegas Review-Journal (Dec. 19, 2008).

The bad news: it’s already sold, according to the website. But good news again—if you want one like it, there are 533 more, and they may, at some point, be put up for sale.

Inscriptagraphs listed this one at $700, in case you’re wondering.

“Everybody Here Is ‘Oh My Gosh, You Got a Box of Heads'”

Police Skeptical of Suspect’s Claim to Be Invisible