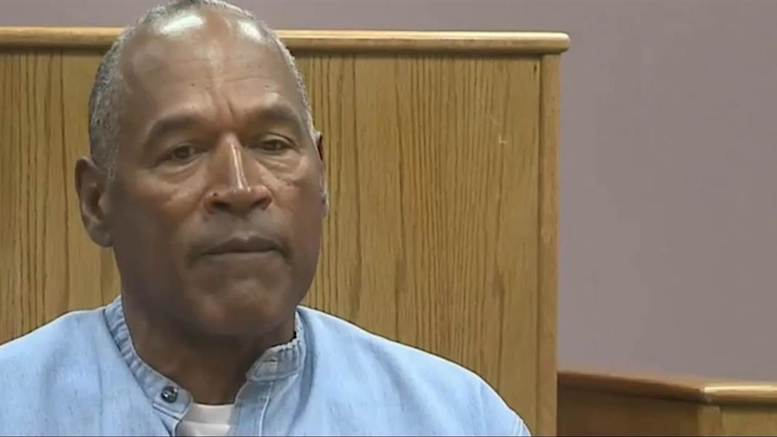 Those were just a few of the words that came out of the mouth of Orenthal James Simpson at his parole hearing yesterday, after which, as you know by now, the parole board decided he should be released. It almost certainly made that decision because, frankly, nine years is a pretty long time to serve for that Las Vegas nonsense of which he was convicted.

Of course, it would be a ridiculously short time to serve for committing a double murder, had he done anything like that, which officially and as a matter of law he did not. And that technically being the case, the parole board could not take those non-crimes into account when deciding on his request for parole. It voted unanimously to release him, which could happen as early as October 1.

One who thought Simpson had whacked two people could be forgiven for thinking so. Although he was acquitted of the alleged homicides, a different jury found him liable in the civil case brought by the families of his alleged victims. Indeed, Simpson himself set forth a pretty convincing theory of how it might have happened, if he had done it, in a book entitled “If I Did It, Here’s How It Happened.” (That was one of the rare events for which I have felt the need to say “I’m not making that up,” and I will say it again now.) “I have never seen so much blood in my life,” Simpson wrote in that book, speaking hypothetically, of course. 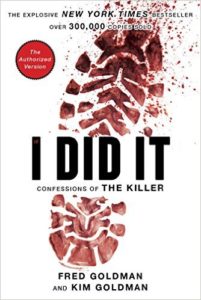 It is there, somewhere

The book was later published, but only after the Goldman family won the rights to it, and they published it under the just slightly different title, “If I Did It: Confessions of the Killer,” the “if” being virtually invisible.

But again, officially, technically, and as a matter of law, he did not do it. And that was certainly the position he took during his parole hearing, at least implicitly. For example, the phrase “I’ve spent a conflict-free life” is not something a person could honestly say if he had, in fact, taken a knife and killed two people with it. That person conceivably might think to himself, “well, they didn’t have a chance to fight back, so is that really a ‘conflict’?” And that wouldn’t be totally unreasonable, because (according to the OED) “conflict” means “an encounter with arms; a fight, battle … esp. a prolonged struggle,” which implies that both sides participated. But—again, assuming he had done it—this couldn’t be consistent with the actual facts, because not even a once-great athlete could kill two people at once with a knife. No, I think we have to assume that O.J.’s position remains that he did not do those crimes at all.

Although the full quote is worth raising at least one eyebrow at:

I’ve always thought I’d been pretty good with people and I basically have spent a conflict-free life. You know? I’m not a guy that ever got in a fight on the street and with the public and everybody….

Hm. Those are unusual qualifiers for somebody who’s never been in a conflict at all. Not “on the street and with the public and everybody,” but … what? It almost seems to suggest he got in least one fight under other circumstances at some point. But he didn’t finish his sentence, so I guess we’ll never know.

Also arguably inconsistent with the no-conflicts view is O.J.’s statement that among the courses he’s taken in prison is a two-part course called “Alternative to Violence.” “I think it’s the most important course anybody in this prison can take,” he told the board, “because it teaches you how to deal with conflict through conversation.” I don’t know about that—if you’ve made it to the age of 70 with no conflicts to speak of, why would that be important? I haven’t seen the syllabus, though, so maybe it’s more about defusing conflicts started by others, as opposed to not murdering people yourself.

Other comments O.J. made during the hearing are more consistent with the view that his life has been “basically” conflict-free, like “I would never, ever pull a weapon, ever pull a weapon on anybody,” and “I’m a pretty straight shooter,” which is maybe not the most carefully chosen phrase, but you get his meaning.

The comment, “I’ve spent nine years making no excuses about anything,” however, is only consistent with his not telling the truth.

What’s next for O.J. Simpson? Well, “[h]e is a deeply delusional and self-obsessed narcissist, and, you know, good luck to America once he’s out,” said CNN legal analyst Jeffrey Toobin. So, politics! He’ll most likely be a Florida resident in 2018, which makes that an even easier call.

Can a Convicted Felon Serve in Congress?