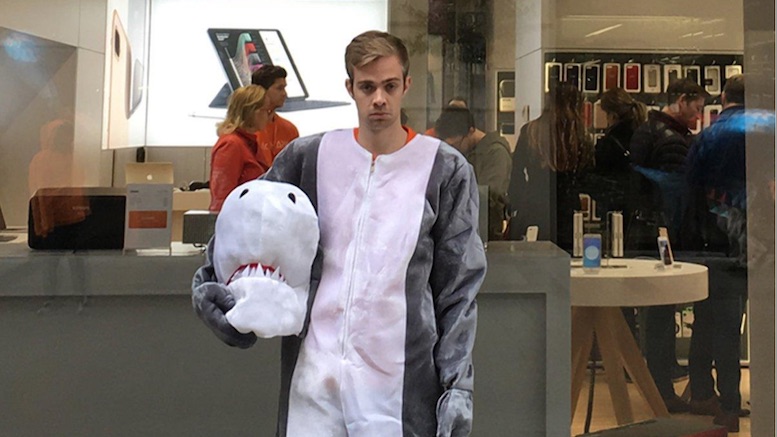 Masks verboten! I am so sad (photo: Warda Network)

The law of unintended consequences strikes again: an Austrian law intended to discriminate against Muslims—sorry, “to encourage assimilation into Austrian culture”—has ended up punishing the nation’s shark mascots, according to reports this week.

I actually don’t know whether Austria has more than one shark mascot, but it has at least one. And that one reportedly got a ticket last Friday in Vienna because his shark head covered his face, something that has been illegal in Austria since the Anti-Face-Covering Act took effect on October 1st.

Is it actually called the “Anti-Face-Covering Act”? Well, technically it’s the Bundesgesetz über das Verbot der Verhüllung des Gesichts in der Öffentlichkeit (“Federal Law on the Prohibition of Covering the Face in Public”), but the Act says you can call it the Anti-Gesichtsverhüllungsgesetz (“Anti-Face-Covering Act”) for short. So, yes.

This is one of several recently enacted provisions relating to immigration, generally described in the legislation as being intended to encourage “integration” of migrants into Austrian society. The objectives of the Anti-Face-Covering Act in particular are said to be “the promotion of integration by strengthening participation in society and securing peaceful coexistence in Austria.” It is generally referred to as “the burqa ban,” because some cynics apparently believe the intent is actually to keep Muslim women from wearing burqas, but as you can see here, it doesn’t say anything about that:

Well, embarrassingly, Google translates Verhüllungsverbot as “Veiling Ban,” but Verhüllung seems to be a more general term that can also mean “cover,” “mask,” or “disguise,” so there’s that.

The first paragraph of the section provides that anyone who conceals his or her facial features with “clothing or other objects” in a public place or building can be punished with a fine of up to 150 euros. The second paragraph says the first one doesn’t apply if the concealment is required by another law (like the one requiring motorcycle helmets), is within “the framework of artistic, cultural, or traditional events,” or is done “in the exercise of sports or health or for professional reasons.” The explanatory notes work pretty hard to list examples of coverings that are permitted under these exceptions without ever suggesting that they would include clothing worn for religious reasons, like, let’s say, just speculating here, a burqa. And it appears that “cultural or traditional events” are understood to mean Austrian culture and tradition, though after some confusion, the Interior Ministry clarified that the law won’t apply to Halloween costumes, even though Halloween is, to the best of my knowledge, not traditionally Austrian.

“I had no idea the law was so extreme it covered mascots,” said the manager of the advertising agency who sent the Austrian shark out to dance around in front of McShark’s, a new electronics shop in Vienna. But indeed it did apply, or at least police who harassed the shark last Friday believed it did. “The shark was fined because he refused to take his mask off,” a police spokesman confirmed, although based on the picture it looks like he just didn’t take it off quickly enough. “I’m only doing my job,” the shark complained, to no avail.

I should mention that a number of U.S. states also have laws that make it illegal to wear a mask in public, but most of those were passed in the first half of the 20th century and were aimed at the Ku Klux Klan. Even in that context, though, the laws pose First Amendment problems, and so a ban like Austria’s that everybody understands is aimed at a disfavored cultural/religious practice would definitely not survive scrutiny here.

Not that a good American who likes freedom would actually try to pass something like that.

Sasquatch in the Emergency Room