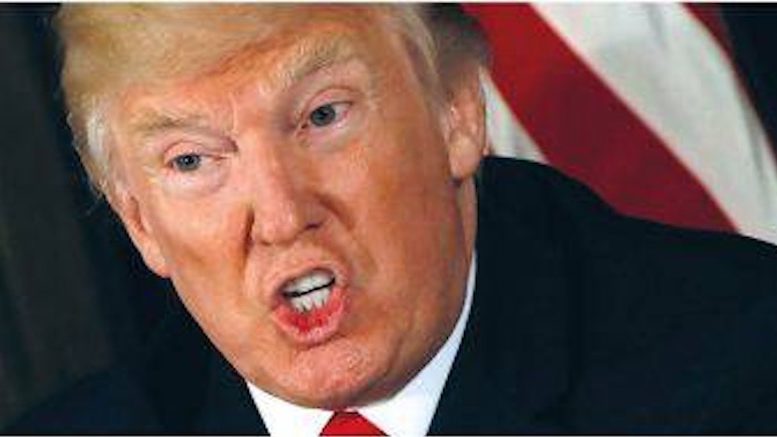 The book's cover photo, which is probably more flattering than its contents

As you’ve probably heard, reporter Michael Wolff has written a book about the Trump White House that’s allegedly based in part on interviews with insiders and former insiders, including Steve Bannon. You may recall that Trump chose Bannon to run his campaign, then appointed him White House Chief Strategist, and then gave him a seat on the National Security Council, before firing him and claiming he really hadn’t been very important, though reportedly remaining in regular contact with Bannon, apparently still valuing his counsel, at least until yesterday, when he said he thought Bannon was insane.

This latest view was prompted by the publication of Wolff’s article (adapted from the book) in New York Magazine entitled “Donald Trump Didn’t Want to Be President,” which, like the book, quotes Bannon extensively and is not what one might call flattering. But you can read all about that in the article and/or book, which will be released tomorrow (Jan. 5), if you want. Here we are interested in the President’s threat to sue Wolff and his publisher, and specifically in his lawyer’s demand letter in which said threat is communicated.

As is so often the case with these things, the letter is a hoot. Or, not so much the letter, which isn’t funny at all, but rather the suggestion that Donald Trump would actually follow through on this latest of his many legal threats, much less win.

That is the hootworthy part.

The letter comes not from White House Counsel, but rather from lawyers in Beverly Hills who represent one “Donald J. Trump,” private citizen. The letter—which is 11 pages long—actually never refers to Trump as “President” at all, except when mentioning the book’s title and referring to his campaign, “Donald J. Trump for President, Inc.” (I have trouble referring to him as “President,” too, but then he’s not my client.) A president can have lawyers for private purposes, of course, and could file (or have to defend against) lawsuits in a private capacity.  (He is not, as he has argued, immune.) But even if he’s acting as a private citizen, there’s no getting around the fact that for purposes of defamation law he’s a very public figure.

In legal-writing terms, the letter is fine, unlike some other public-figure-lawyer letters I could mention (and recently did).  My only comment on that score is to wonder, again, what genetic flaw it is in lawyers that make it almost literally impossible for them not to do this: “This law firm is litigation counsel for Donald J. Trump (‘Mr. Trump’).”

The letter is on behalf of and entirely about Donald J. Trump. The “Re:” line reads “Donald J. Trump.” No other “Trump” is mentioned in the letter. There is no danger of confusion as to which “Trump” a given sentence in that letter might refer to, as there is only one throughout. It would be different if more than one “Trump” were involved, like in an indictment, or if the letter also referred to Donald L. Trump, the unrelated Virginia oncologist who is sometimes linked with the alleged billionaire though, in fact, he supported Hillary Clinton. Then maybe a distinction should be made. Otherwise, not. And yet, there it is, every time.

Having accomplished that necessary task, the letter (hereinafter, the “Letter”) then goes on to offer a few thoughts and authorities regarding the claims to which the Book and Article have allegedly given rise, namely “defamation by libel, defamation by libel per se, false light invasion of privacy, tortious interference with contractual relations, and inducement of breach of contract.” Are any of these authorities necessary in a letter to some guy, as opposed to a pleading filed with the court? Nope! But they do make the Letter scarier, or would, if it wasn’t written on behalf of Mr. Trump.

When it comes to defamation etc., oddly enough the only section that cites no legal authority is the one on “actual malice.” New York Times Co. v. Sullivan, 376 U.S. 254 (1964) (in case they’re still trying to hunt that one down). That’s the First Amendment case that makes it much harder for a “public official” to prove defamation. Even if a statement turns out to be false, a public official can’t prevail unless he or she can prove it was made “with knowledge that it was false or with reckless disregard of whether it was false or not.” Negligence isn’t enough, in other words. In practice, this is very difficult to prove and so defamation cases by such people rarely succeed.

This has not prevented Mr. Trump from filing a lot of them, and occasionally he has even won. But more often he has just threatened a lawsuit but never filed, or if he does file he later dismisses, having achieved the main goal of harassing his opponent. That’s clearly what this letter is intended to do, partly because the majority of it (eight of 11 pages) has nothing to do with defamation but is all about the many and potentially expensive things that Wolff and his publisher supposedly have to do now to “preserve evidence,” since they are on notice of a possible lawsuit. There is a duty to preserve evidence, in fact, but here I seriously doubt they were planning on deleting anything anyway.

Oh, the contract claims mentioned above have to do with Steve Bannon. You see, as he often does, Mr. Trump required Bannon to sign a non-disclosure agreement promising not to (among other things) disparage Mr. Trump in the future or even speak to the media about Mr. Trump. So the claim is that by convincing Bannon to talk for the Book and/or Article, Wolff was inducing Bannon to breach the NDA. I haven’t researched this, but the idea that an NDA designed to prevent future criticism of the President would ever be enforceable strikes me as especially hootworthy.

“Injured While Searching for Dead Bodies at Lake Mead?”

TIP: If You’re Standing in Front of a Car, You Are In a Poor Negotiating Position