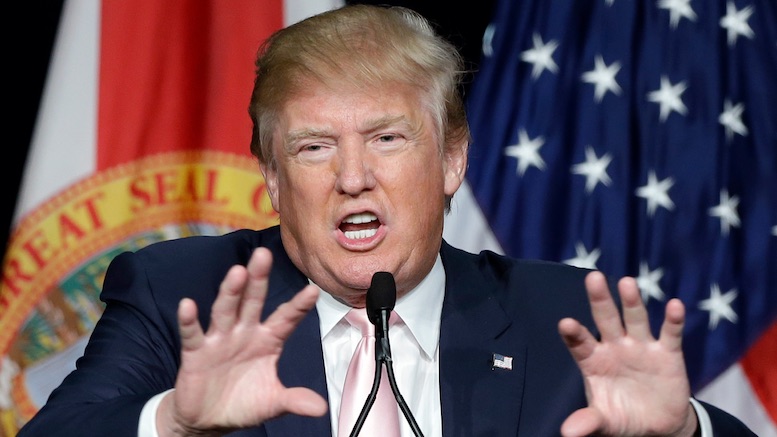 Trump may be groping for an argument in this case (image: AP/Alan Diaz)

Is the current one arguing that he might be?

Not “arguing” in the sense of reasons, at least not yet. But the potential for immunity is a premise of the brief Trump’s lawyers filed on Monday in Zervos v. Trump. Summer Zervos, who was a contestant on The Apprentice, sued Trump for defamation on January 17. She alleges he sexually harassed her in 2007, and although the statute of limitations has long since expired on that stuff, Zervos claims Trump defamed her during the campaign when he accused her (and all the other women who told similar stories) of lying.

Now, this doesn’t strike me as a very strong claim for reasons independent of who’s telling the truth about the alleged gropery. But the question here isn’t about the merits, it’s about presidential immunity. Trump’s lawyers ask for a 60-day extension of time so they can fully brief the immunity issue, and then a further delay because Trump might be entitled to immunity and the case would be a waste of time if he is.

But it’s pretty clear that the president is not entitled to immunity from civil lawsuits that accuse him of doing bad things before he took office. In fact, it is crystal clear that he is not entitled to immunity from such lawsuits if they are pending in federal court. Crystal clear? Really? Yes. As in, unanimous-Supreme-Court-decision-on-nearly-identical-facts crystal. Which is about as crystal as things get in this business.

If the facts sound familiar, then you were alive while Bill Clinton was president and/or you know anything at all about that time period. In case you weren’t and don’t, Clinton was accused of similar conduct by a number of women including Paula Jones. Jones sued Clinton after he took office, basing her case on bad things allegedly done earlier. Clinton “promptly advised the District Court that he intended to file a motion to dismiss on grounds of Presidential immunity, and requested the court to defer all other pleadings and motions until after the immunity issue was resolved,” just as Trump did on Monday. That court held Clinton was not immune, but did agree to postpone any trial until after he left office. On appeal, the Eighth Circuit also said no immunity, and even reversed the postponement because it viewed that as “temporary immunity.”

The Supreme Court also held Clinton was not immune, rejecting arguments based on precedent,1 history, and the structure of the Constitution (i.e. separation of powers). A president is immune from liability for official acts (cf. impeachment), but can be sued for unofficial ones. The Supreme Court also held that a sitting president might be entitled to a postponement of a civil case in some circumstances, but that Clinton hadn’t shown he should get one. And the decision was unanimous.

So what’s Trump talking about?

First, he wants a 60-day extension, and he’ll probably get it, just because that’s not unusual in litigation and there is an issue to be briefed. Still, his rationale is snort-inducing:

The requested extension is reasonable and should be granted, especially in light of the critical importance of the immunity issue and the consequent need to provide the Court with a full analysis of the relevant constitutional law and analysis, as well as the President’s extremely busy schedule during his first 100 days in office.

Emphasis added. On Sunday—the day before his lawyers filed this—Trump made his 13th visit to a golf course during his first 65 days in office. And it’s not like he needs to set aside a lot of time for things like, you know, reading stuff:

[F]or the moment, Mr. Bannon remains the president’s dominant adviser, despite Mr. Trump’s anger that he was not fully briefed on details of the executive order he signed giving his chief strategist a seat on the National Security Council….

Emphasis added again. So, the idea that an extension is justified because this President is too busy to wrestle with the analysis in a brief (that he’ll never see) on constitutional law is nothing short of hilarious.

Second, he’s asking that everything else, including discovery, be postponed until after the immunity issue is resolved. The brief says filing the immunity motion stays discovery under New York law, so maybe that happens automatically. But otherwise, the whole premise is that Trump may actually be entitled to immunity and so it’s a waste of time to go forward with a case the court can’t hear.

That premise seems just slightly undermined by Clinton v. Jones, is the problem.

There is a basis for the motion, because the Supreme Court refused to decide whether the result would be the same if the case were in state court. If so, the Court said, “instead of advancing a separation-of-powers argument, petitioner would presumably rely on federalism and comity concerns, as well as the interest in protecting federal officials from possible local prejudice” in state courts. Well, none of that sounds very convincing, but in a footnote, the Court also suggests the Supremacy Clause might pose a problem if a state court tried to tell the President to do something. “Whether those concerns would present a more compelling case for immunity is a question that is not before us.” The Zervos case is in state court, and so this is the potential loophole Trump’s lawyers are citing.

So is there anything to their state-court argument here? Seems unlikely to me.

The Supremacy Clause makes the Constitution and federal laws “the supreme Law of the land,” and the President is required to see that the law is “faithfully executed.” So if a state-court lawsuit actually interfered with a president’s ability to do that, there might be a problem. But there has to be something more than the argument that “he’s a busy guy,” even if that were actually true. After all, Bill Clinton made basically the same argument and nobody ever bought it. It’d basically mean the president could never be sued during his term.2 If a state court tried to interfere directly with some official role or duty, that’d be different, but the question here is liability for unofficial acts committed before taking office. Also, it’s civil liability, so there’s no prospect that this case would end with him being locked up and unable to faithfully execute. He’d just have to pay money (and not very much, in this case).

Maybe Trump’s lawyers will surprise, but it’d surprise me if they did.

1 Teddy Roosevelt, Truman, and JFK were also defendants, briefly, but immunity was never an issue in those cases.

2 As the district court in Clinton put it: “Nowhere in the Constitution, congressional acts, or the writings of any judge or scholar, may any credible support for such a proposition be found. It is contrary to our form of government, which asserts as did the English in the Magna Carta and the Petition of Right, that even the sovereign is subject to God and the law.” So it does seem like kind of a long shot.