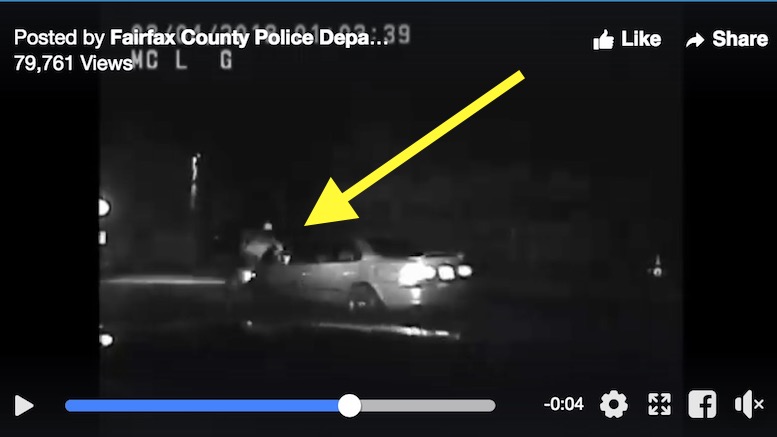 Maybe flee around the back instead?

Look, there will come a time when you’re going to have to get out of your vehicle and flee on foot. You know it. I know it. That time is coming. There’s no getting around it. But though we all know it’s coming, you can never know exactly when. It just sort of sneaks up on you and then bam, suddenly you’re in a foot chase.

The man shown here not following this advice in Alexandria, Virginia, wasn’t seriously harmed, but he wasn’t sober, either. He got up and kept running after managing to hit himself with his own car, but the foot chase was significantly shorter than it otherwise would have been.

According to the report, police said they tried to pull the man over because of “an apparent equipment violation,” and that could mean almost anything (or nothing) but I notice that he was charged with “illegal window tinting” in addition to his third DWI. Virginia’s law on window-tinting is both convoluted and weirdly precise (there is no tinting ever, unless the car has side mirrors, which they all do, in which case it’s fine, except not on the lower part of the windshield, and on windows only if total light transmittance is not reduced to less than 50 or 35 percent, depending on the window, and light reflectance does not exceed 20 percent, unless the material was applied before July 1, 1987, and I could go on but won’t), and so it strikes me as unlikely that officers are able to reliably evaluate possible violations of this statute just by looking at the windows of a moving car at night. But perhaps I have underestimated their ability to estimate total light transmittance on the fly.

In any event, whatever their reasonable articulable suspicion actually was in this case, it paid off, because they got a drunk driver, and one who is probably too dumb to operate a vehicle when he’s sober, for that matter.

Proposed Law Would Make It Illegal to Hoot After 11 P.M.