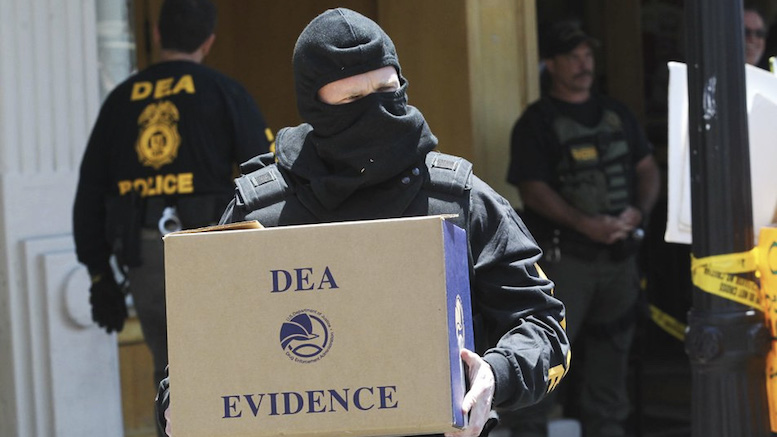 "Here's another box o' money, guys. Make sure we get it all back! Ha!"

As Justin Rohrlich reports this week for the Daily Beast, the Drug Enforcement Administration recently expressed a concern that currency it seizes in drug busts could be covered in deadly chemicals, and has asked potential vendors for information about helping it clean up the dangerous bills.

There is good reason to believe that this is ridiculous.

In a Request for Information posted on June 14, the DEA said it was “interested in learning more about available capability in cleaning and decontaminating currency tainted with drugs and other unknown substances.” Some of these substances, it explained, “may be extremely harmful to human health and potentially result in death,” which can also be extremely harmful to human health. “As such,” the DEA continued, “the currency must be decontaminated to ensure safety.” It invited interested vendors to respond by June 26.

There is a lot wrong with this, even beyond the glaring misuse of the phrase “as such” to mean “therefore” and to refer to “substances” in one sentence but “currency” in the other. I mean, that is certainly appalling and something we need to address, it’s just not the biggest problem here.

Here are two bigger ones.

First, according to multiple sources quoted in the article, while one could not describe currency in circulation as “clean,” and drug residue of some kind is not rare, there seems to be little if any evidence that the levels involved could be harmful in any way, much less deadly. I say this only partly because the “hazardous substances” listed by the DEA for potential “decontamination” include marijuana/THC. (I’m not a doctor, but I haven’t exactly seen any headlines about emergency rooms being choked with cases of marijuana poisoning, and I live in San Francisco.) But what did the actual experts quoted in the article say? Here’s a summary:

The question therefore seems to be: Are DEA agents or administrators eating any of the currency they seize?

And this brings us to the second problem: if they are eating it, how would we know? Because the most interesting thing in the RFI is the DEA’s statement that, because the seized drug money is so dangerous that they will not be able to count it before turning it over to the vendor for cleaning:

“Hi, guys, Steve over at DEA again. Hey, so we got another truckload or so of contaminated currency here that we need to ship over for you to laun— to decontaminate.”

“Whoops! You almost said it, Steve!”

“No, I said ‘decontaminate.’ Like in the proposal. Anyway, we’ve got, like, a truckload of hundreds here. What do you think?”

“Yes. Oh, and don’t forget—we need to get a truckload back, too.”

“Oh, absolutely. You will get a truckload back.” <is making air quotes with fingers>

“Okay … You’re not making air quotes, are you?”

“Okay. Because we talked about that.”

“Don’t forget to double-bag the cash. You know, so some of the bags don’t break and spill the money out all over the road, never to be seen again.”

“Very funny. You guys are a real hoot.”

The phrase you’re looking for, I think, is “what could go wrong?” We have a federal agency pursuing a “war on drugs” that is basically pointless to begin with; an agency that (like many others) has a record of seizing assets before any conviction has taken place and without any discernible connection to law enforcement (see “Report: Many DEA Cash Seizures Have ‘No Discernible Connection’ to Law Enforcement” (Apr. 6, 2017); and here it is saying it’s going to ship money back and forth for “decontamination,” on a questionable basis, without even counting it.

What could go wrong?

See also “DEA Agent: If You Legalize Pot, Rabbits Will Get High” (May 4, 2015) (discussing another really stupid argument a DEA agent made once).

Court: No Cause of Action for Gun-Safety Instructor Who Shot Himself

“Probably an Accident,” Say Police About Death of Spy Found Inside Locked Bag