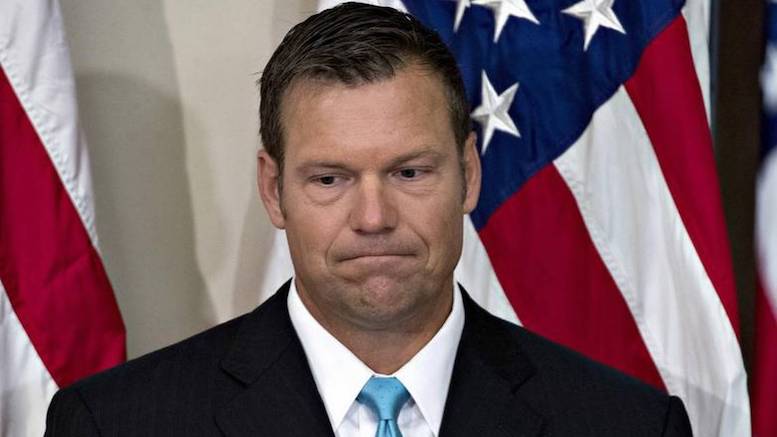 If the Kansas Secretary of State gets an official portrait, Kobach's should be based on this picture (image credit: Bloomberg).

Judge Julie Robinson didn’t actually order Kansas Secretary of State Kris Kobach to go back to Yale and start over, and I agree with that only because Yale shouldn’t have to put up with him a second time. No, wait. I just rethought that, and now it seems like Yale is at least partly responsible for him and should have to take him back and try again. Please ignore the second clause of that first sentence.

Judge Robinson did, however, order Kobach to take six hours of continuing-legal-education classes, in addition to those otherwise required in order to practice law, as a sanction for his repeated attempts to introduce evidence at trial that the court had ruled would not be admissible. As you may recall, Kobach made the poor decision to personally represent his office in a lawsuit challenging a voter-ID law, and let’s just say that ignoring the court’s rulings wasn’t the only mistake he made at trial. See, e.g., “Do They Teach Proofreading at Yale?” Lowering the Bar (Apr. 27, 2018); see also “Assorted Stupidity #111” (Mar. 13, 2018) (noting judge used the phrases “that’s not how trials are conducted” and “Evidence 101” when addressing Kobach). But according to the court’s order, repeatedly offering inadmissible evidence was what justified the back-to-school sanction.

This seems to have resulted mostly from Kobach’s failure to follow the rules requiring disclosure of evidence to the other side before trial. Despite what you may see on TV, trial does not hold too many surprises for lawyers (except when their pants catch on fire during closing argument, but that is sadly quite rare) because evidence is exchanged in advance so each side can prepare. If you withhold evidence you were supposed to produce, then among other things you can be ordered not to use it at trial. Kobach either did not understand or refused to follow this rule, because the judge described “a pattern and practice by [Kobach] of flaunting disclosure and discovery rules that are designed to prevent prejudice and surprise at trial.” This happened often enough, she said, that it raised a question whether he “repeatedly failed to meet his disclosure obligations intentionally or due to his unfamiliarity with the federal rules,” neither of which are things that federal judges generally consider acceptable.

I was involved in a case not long ago where my opponent posed this same dilemma to the judge, and for similar reasons. He got sanctioned, too, and it wasn’t the first time, either. In the previous example, the court put it this way: “There are two possible explanations for Mr. _____’s conduct. The first is incompetence. The second is that [he] was attempting to sneak this testimony … into the trial…. In his response to the Court’s order requiring him to explain his conduct, [he] has disclaimed the former explanation. Accordingly, [sanctions].”

In Kobach’s case, though, it looks like the judge has decided to give him the benefit of the doubt, if that’s the right phrase, and assume he’s only incompetent. “Defendant chose to represent his own office in this matter,” she wrote, and so he “had a duty to familiarize himself with the governing rules of procedure….” Because he obviously didn’t (again, assuming he wasn’t ignoring them), “the Court therefore imposes a CLE requirement of 6 hours [that] must pertain to federal or Kansas civil rules of procedure or evidence.” Kobach has a year to comply.

In the other 115 pages or so of the order, the court agreed with the plaintiffs that the law Kobach was trying to defend was unconstitutional and violated a controlling federal statute as well. The trial was Kobach’s chance to prove that the law was necessary because voter fraud is rampant in Kansas, something he entirely failed to do (and not just because his sneaky evidence was excluded).

Kobach claimed before trial that his office had found 11 cases of noncitizens who had managed to vote in Kansas, and—apparently understanding that 11 wasn’t very many—insisted that this was only the “tip of the iceberg.” In fact, the court found, the evidence showed “there is no iceberg.” At most, she said, Kobach had shown that 67 noncitizens “registered or attempted to register in Kansas over the last 19 years,” and 39 citizens did the same. Since even Kansas has almost two million registered voters, the court noted (“even Kansas” is my phrase, not hers), this could hardly be considered significant.

In fact, she pointed out, the evidence showed that Kansas has on its voter rolls about 100 people “with birth dates in the 1800s,” which would make them at least 119 years old at this point, and “400 individuals with birth dates after their date of registration.” (Emphasis added.) If Kansas democracy can tolerate “anomalies” like that, the judge implied, 106 unqualified voters in two decades isn’t going to ruin it either.

You may recall that Kobach was previously in charge of the president’s commission on voter fraud, until that was quietly closed down because it, too, was complete BS.