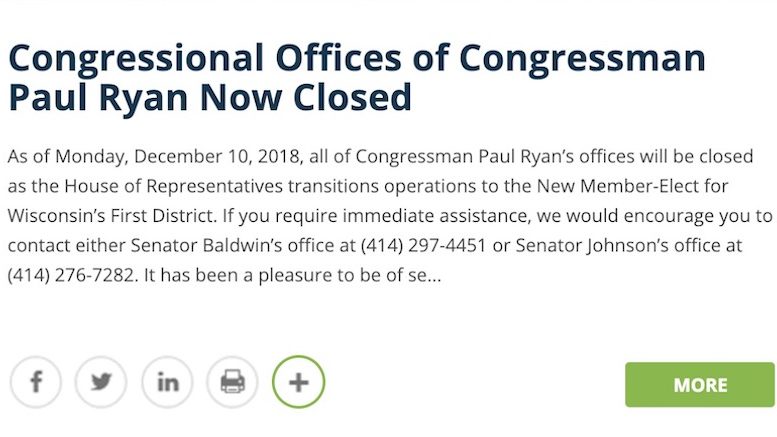 [Sing], O Muse, of his legislative victories, of his many bills sponsored, signed into law. This man of myth, … this Hero Paul Ryan, whose nineteen years in the House of Representatives resulted in — okay, surely, Muse, this part has to be a typo. He was the primary sponsor of over 70 bills and only three of them were signed into law? One that renamed a post office and one that lowered the tax on … arrow shafts?

This was news to me but seemed worth following up on.

The first thing I found was a press release issued by Rep. Ryan’s office on March 19, 2003, saying Ryan (R-WI) was pleased that the House had passed H.R. 1308, which at the time was entitled “The Tax Relief, Simplification, and Equity Act” but which the press release referred to as the “Paul Ryan Bipartisan Archery Legislation.” The release went on to explain the pressing need for such legislation:

[A]rrows assembled overseas and imported into the United States are not subject to the same tax as arrows made and assembled in the U.S. This puts U.S. arrow manufacturers at a clear competitive disadvantage, encourages them to relocate their businesses (and jobs) overseas, and prevents revenue from flowing to conservation and game management programs.

The Ryan Bipartisan Archery Legislation (section 501 of H.R. 1308) was designed to correct this glaring inequity.

Sadly, the Ryan Bipartisan Archery Legislation did not make it into the final bill, which became the Working Families Tax Relief Act of 2004. Justice for bowhunters (a group that coincidentally includes Paul Ryan) and other archers would have to wait until the following session, when Ryan stepped forward to take the lead on this issue by introducing H.R. 5394, a bill “To Amend the Internal Revenue Code of 1986 to Modify the Taxation of Arrow Components.” This ultimately passed without amendment—and so it was in fact “bipartisan”—but not before the House debated this important matter for 40 minutes on Dec. 6, 2004.

As that debate reveals, there had been at least two prior attempts to address the arrow-shaft-tax discrepancy, which Congress had itself either created or exacerbated “inadvertently” back in 1997. One representative noted that they had passed another bill just a few weeks before that they “thought took care of it,” only to be told that they had, instead, again imposed a new tax by mistake on “about 10,000 sports retailers.” Now, he said, they wanted to “fix this one right.”

The (non-voting) delegate from the U.S. Virgin Islands then rose to say that she did “not expressly support or oppose H.R. 5394,” but wanted to express her disappointment that her constitutents had not been “afforded a similar opportunity” to fix a problem they had, which it turned out had nothing to do with archery or taxes.

Rep. Charles Rangel (D-NY) then rose for two purposes: (1) to make fun of the Republicans for botching the legislation twice before, and (2) to join in the complaint about the U.S. Virgin Islands thing and add one about Haitian disaster relief. But he too had no objection, it turned out, to the “bows and arrows” legislation itself. In conclusion, he congratulated Ryan on his achievement:

Mr. RANGEL. I want to compliment my colleague, Representative Paul Ryan, for his diligence in correcting the drafting error for the 1997 bows and arrow tax relief provision and, again today, for correcting the correction…. One would have thought that drafting a simple bill, like bows and arrows, could be handled right the first time. But, I understand that things happen.

Mr. RYAN of Wisconsin. Mr. Speaker, I yield back the balance of my time.

The bill then passed the House by voice vote. It later passed in the Senate by unanimous consent, and was signed into law by President G.W. Bush on Dec. 23, 2004. Just in time for Christmas.

According to Congress.gov, the other two bills Ryan sponsored that became law were H.R. 4241, which designated the facility at 1818 Milton Avenue in Janesville, Wisconsin (Ryan’s hometown), as the “Les Aspin Post Office Building”; and H.R. 1831, The Evidence-Based Policymaking Commission Act of 2016, which established a commission to study and report on various data protocols, a commission that issued its final report on September 7, 2017, and then disbanded.