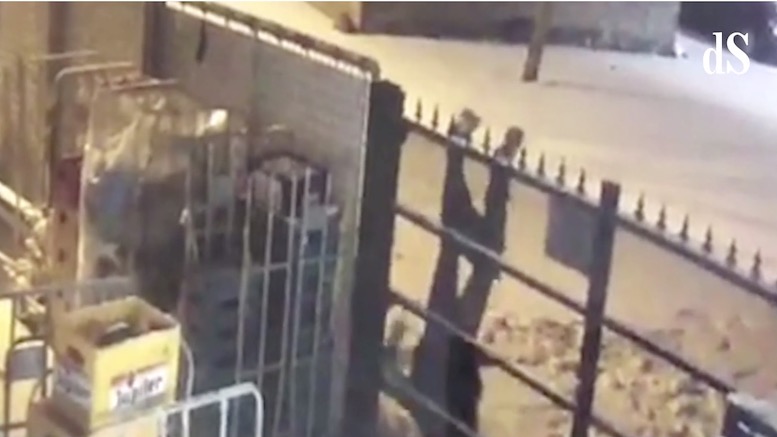 The spikes are intended more as a deterrent, but you never know (image: De Standaard)

No sophisticated legal analysis necessary here—OK, no analysis at all—but that’s good because I’m in Seattle waiting for a connecting flight. I’ll do what I can, though, because the alternative is sitting here watching a game that appears to actually be called “the Cheez-It Bowl.” Sorry, no.

If you too have limited time, simply enjoy the picture above, which depicts the aftermath of an obviously failed attempt to steal beer from a store in Bocholt, Belgium, about a week ago.

If you have slightly more time, I recommend visiting my source (De Standaard), where you can watch a pretty hilarious two-minute montage of security-camera footage leading up to the final humiliation shown above.

If you have just slightly more time than that, here’s the very brief report. Feel free to skip ahead if you can’t read what I believe to be Dutch:

Here it is in English, at least as rendered by Google Translate:

A burglar had to lower his pants in the night from Saturday to Sunday in order to escape. The man kept hooking on the pins on the Spar fence in Kaulille (Bocholt) where he came to steal beer. The thief has now been arrested.

“He even came back again. And again he kept hooking on the fence,” says manager Jos Craeghs. He hung upside down for about an hour. It was snowing, so he will have been seriously hypothermic. Eventually he lowered his pants in the hope of being able to escape [as shown above], but he did not succeed [also as shown above].

Passers-by eventually informed the police …, who picked up the burglar.

What’s that? The plane was delayed? Okay, then we’re doing fence history. Oh, it wasn’t delayed that long? Okay, then we aren’t doing that after all. I will just say that this incident is believed by fence experts, at least those sitting near me in this bar, to be the first time in recorded fence history that an intruder has actually been foiled in this particular way by a fence with sharp points on top. But surprisingly, none of them can actually cite any evidence. I am willing to speculate that although such incidents are probably very rare, this has probably happened at least once before.

According to some sources, the oldest known man-made structure of any kind is a stone wall in front of the Theopetra cave in Greece, believed to be about 23,000 years old. There were probably fences well before that, but if they were made from wood then those would not have survived until today. If they were wooden, they were probably palisades, which are fences or walls made from wooden stakes driven into the ground side-by-side. And it wouldn’t take too long for somebody to figure out that it’d be a little harder to climb over such a wall if you just sharpened the top of the stakes. On this I base my hypothesis that pointy-topped walls are very old indeed. But of course I can’t say how old.

So it seems more fruitful to examine the other variable in this equation, namely pants.

Here again we can’t be sure how old pants are, because textiles don’t survive that long, either. But no less an authority than the Archeological Institute of America tells us that the world’s oldest known pants are two pairs of Chinese trousers (well, trousers found in what is now China), which “were made between the thirteenth and tenth centuries B.C., making them the oldest known surviving pants by almost 1,000 years.” (Nope, the “Iceman” wore leggings, not pants.)

So let’s look at it this way: it’s been at least possible for idiots wearing pants to have tried to climb over pointy-topped fences for something like three thousand years. It’d be amazing if this were actually the first time one of them had ended up hanging upside down like this guy did.

This would definitely not be the first time I’ve missed a plane, though, so that’s all for tonight.