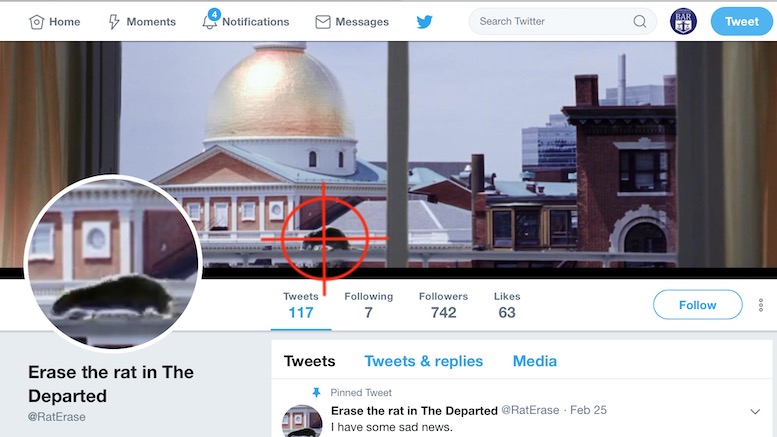 “It’s always bothered me that a movie as good as The Departed has such a cheesy ending,” Adam Sacks wrote on his Kickstarter page, and he’s not alone. Since the movie came out in 2006, I don’t think it’s much of a spoiler to say that the movie involves informants, often referred to as “rats,” or to say that it ends with a shot of an actual rat scurrying along a balcony. And it turns out I was not the only one to think that this was just a little heavy-handed and that the movie—though great, and it did win Best Picture and all—would have been even better without those last few seconds.

Warner Bros., though, remains fully committed to the rat. We know this because it threatened to sue Adam Sacks if he didn’t shut down his Kickstarter, which had raised almost $5,000 to fund his project to remove the rat from the end of the film and make the rat-free version available to the public. The result:

“Although we live in an era when money and copyright laws allow corporations to stop a Kickstarter,” Sacks wrote, “nothing can stop ideas. Ideas like digitally erasing the rat from the end of The Departed.”

Behind this Kickstarter is an idea, Mr. Creedy … and ideas are bulletproof.1

“As this project comes to a close,” Sacks concluded, “I’d like to thank everyone who supported me and everyone who called me an idiot. Without all of your help, this story would not have reached national publications and triggered a Warner Brothers Google alert.” He said he hoped the level of support he had received would convince Warner Brothers to release its own rat-free version (well, without the one at the end, anyway).

How Martin Scorsese feels about this isn’t clear.

I’m not an expert on copyright law (yet), but here are some thoughts. First, I think Sacks is right that Kickstarter was required to honor the DMCA takedown notice, based on my understanding of how that works. Kickstarter couldn’t be liable for infringement, but has to honor takedown notices pending the resolution of the dispute. But the disputes can be costly, which has been a problem for some YouTube creators who can’t really afford to fight even a bogus takedown notice. Second, assuming Sacks did want to fight this, what would the result be? In other words, is it “fair use” to digitally remove the rat from the end of The Departed?

First, the result would not really be “transformative,” like a parody of the movie would be. He’d just be taking out the rat. Though it would plainly improve the movie, it doesn’t really create anything new. Second, the “nature of the copyrighted work” is artistic, not factual, which would also weigh against him here. You have more leeway to copy facts or quotes from news articles because the dissemination of facts benefits the public. The third factor, “amount and substantiality of the portion taken,” could be a real problem. The rat is only on-screen for a few seconds, and while those are important seconds, the project would simply be copying virtually all of the original work. Sacks would likely win on the final factor, the “effect of the use upon the potential market,” because he seems to have planned only a limited “release” that would not likely affect the market for (for example) DVD copies of The Departed.

So, I hate to say it, but it looks like the rat will remain.

1 V for Vendetta (the motion picture) is ©2006 Warner Bros Pictures, Inc., subject to what appear to be numerous assignments of various rights that I’m not going to research further because this is classic fair use and therefore not infringing, which is kind of the whole point.

Sherman Hemsley Still on Ice Due to Will Contest