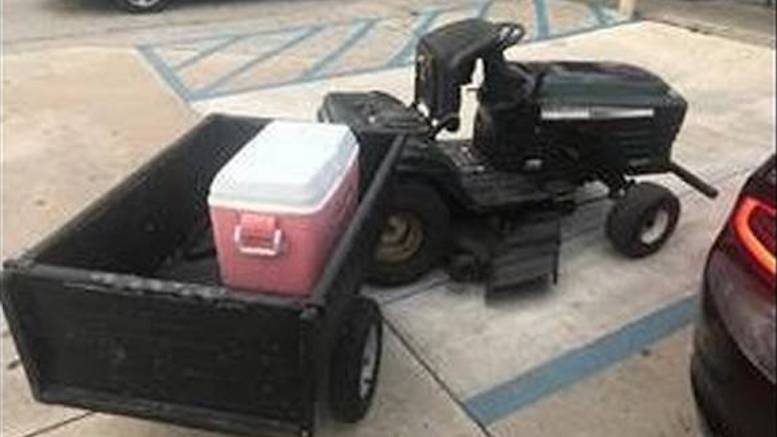 Great news—I remembered to wear pants to my argument before the California Supreme Court on Tuesday. My record before the appellate courts of this nation therefore remains at 100%, in terms of public decency if not actual appellate success. (My record on that score is also good, though admittedly not 100%.)

I’m sure you’d all love to hear about the intricacies of the governmental-interest analysis California applies to conflict-of-law questions, but it is more important right now that we address what appears to be a sudden surge in the number of DSUWI (Driving Something Unusual While Intoxicated) cases worldwide. Reports I’ve received recently show this continues to be a problem, and one in which the public is significantly more interested than the governmental-interest analysis California applies to conflict-of-law questions, judging by the fact that I have received not a single report or question from any of you during the last <checks notes> 14 years regarding the latter issue.

By “appears to be,” of course, I mean “probably isn’t.” Almost certainly, the number of DSUWI cases has in fact remained relatively constant (and relatively low) over the years, with any apparent “spikes” being due to mere coincidence. And since it seems extremely unlikely that there are any other experts (sorry, “experts”) in this field, or any real collection of data regarding it except for this website right here, my conclusion on this will probably go unchallenged.

On the other hand, any glance at a U.S. newspaper these days will show that weirder things can happen than a sudden surge in DSUWI cases worldwide attributable to some as-yet-unknown single underlying cause.

In any event, the last time we addressed this topic was two years ago, when the Canadian parliament took up the issue of whether canoes, kayaks, inflatable rafts, and so forth, should come within the definition of “conveyance” for purposes of that country’s impaired-driving laws. See “Canada May Legalize Drunken Canoeing” (Sept. 29, 2017). I, of course, have been on record for years in defense of the proposition that floating while drunk should not be a crime, or at least that floating down the river on a raft should not constitute the “operation of a watercraft” for purposes of Alaska’s DUI statute. But certainly not all legal questions in this field will have such a clear-cut answer.

On Saturday, May 4, an officer apprehended a 68-year-old Florida man he suspected of operating a riding lawnmower while intoxicated. And by “apprehended,” I mean “noticed when the man drove a riding lawnmower into the side of his police car.” The impact made “a loud noise,” according to the officer, who was inside a nearby business at the time. The report says the officer suspected the man was drunk because of his unusual demeanor, his “extremely bloodshot watery eyes,” and also his utterance of the words “F*ck it, I’m drunk, take me to jail,” which taken together do seem to constitute probable cause.

On top of this, the man also allegedly had cocaine in his system (though he insisted the police had “poisoned” him with it, so I guess the jury will have to decide that one) and, as the Tampa Bay Times put it, his “driver’s license [has] been suspended since the Carter Administration.” The lawnmower was towing a trailer carrying a cooler at the time of the incident, but the cooler was presumably empty since the reports don’t mention its contents. The suspect’s contents, though, were found to be .241 percent alcohol, three times the legal limit.

Unfortunately for him, a riding lawnmower would almost certainly be considered a “vehicle” under Florida law, which defines that term pretty broadly. Not broadly enough to cover horses, as we have seen, but I think riding lawnmowers count.

Meanwhile, the New Zealand office—which just days ago broke the similarly compelling news that the opposition leader was expelled from Parliament after allegedly making “barnyard noises”—reports a court there has held that a motorized chilly bin qualifies as a “motor vehicle” under that country’s Land Transport Act. This will not surprise those of you who recall the similar treatment of such vehicles in neighboring Australia, but it will surprise those of you who (like me) had never heard them called “chilly bins” before. Australians apparently call them “eskys,” whereas in the U.S. we would call these by the much more boring but also more comprehensible-to-English-speakers name of “beer coolers.” To which some enterprising drinkers have attached motors, obviously.

According to the New Zealand report, on May 7 a judge held that while he would indeed treat the motorized chilly bin as a “motor vehicle,” the risk posed by the 24-year-old offender caught riding it was “at the lower end of the spectrum,” as its top speed is just 12 km/hr. Lime scooters have not been treated as motor vehicles there, the court was told, though they can go almost twice as fast, but this does not seem to have swayed the judge. He did not take the chilly-bin operator’s license, but did convict him, fining him $700. He noted that this result was similar to the “two other cases in New Zealand of a person being convicted of drink-driving on a motorised chilly bin,” so there have appparently been two other cases that the New Zealand office has somehow failed to report.

Finally, Norway has detained “the country’s first drink-driving Segway user,” according to the BBC. This was just one month after the things were made legal in the first place … which I only now see, hundreds of words into this post, was back in 2014. Well, this just proves the point I made earlier: what appears to be a sudden surge in something is very often explained by mere coincidence or just stupidity (or possibly light inebriation) on the part of the observer.

Let that (and the part about pants) be a lesson to you.

China Says Its Courts Will Be More Cautious With Death Penalty