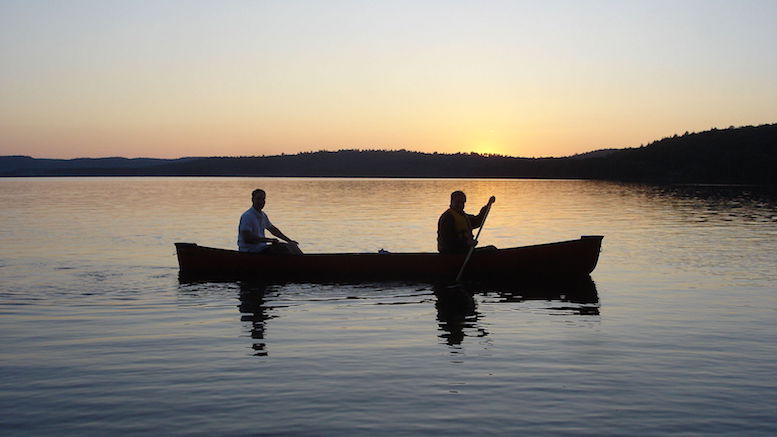 Pull over and step out of the canoe, please

The National Post reports that Canada’s parliament is considering a bill to “clear up a grey area in the Criminal Code” that police have apparently exploited to bring drunk-driving charges against canoeists, kayakers, and even people just floating around on inflatable rafts. I’m not sure it clears up everything, but it’s an improvement.

In my opinion, they are missing a golden opportunity to clarify Zamboni law, but maybe this will be fixed in committee.

According to the report, Parliament is revisiting the country’s impaired-driving laws partly to address the impending legalization of marijuana, but also because they just aren’t very clear. Some of the problems stem from the all-too-familiar (at least to us) failure to define clearly the kind of “vehicles” to which these laws are meant to apply.

Under current law, it’s an offense (well, an “offence,” but I’m translating) to “operate” a “motor vehicle,” “vessel,” “aircraft” or “railway equipment” while impaired. Railway equipment doesn’t seem to pose too many definitional problems, so let’s set that aside. To “operate” the other things means to “drive” a motor vehicle or to “navigate” a vessel or aircraft. So far, so good. But now, the things.

A “motor vehicle” is one “drawn, propelled or driven by any means other than muscular power,” apparently either human or animal. Because “aircraft” and “vessel” are treated separately, it seems fairly clear that a “motor vehicle” must travel on land. I think we can conclude at least that operating a horse, bicycle, unicycle, or similar “vehicle” while impaired is not covered by this law (though still a very bad idea).

So what is a “vessel”? Well, the code doesn’t define it, except to say that the term includes “a machine designed to derive support in the atmosphere primarily from reactions against the earth’s surface of air expelled from the machine.” Huh?

After staring at that sentence for a while, I realized they meant “hovercraft.” Similarly, Parliament did not define “aircraft,” except to say that the term does not include “a machine designed to derive support in the atmosphere primarily from reactions against the earth’s surface of air expelled from the machine.” At some point, that is, Parliament decided the status of hovercraft had to be clarified, and it determined they would henceforth be considered vessels and not aircraft. Okay, fine—but hovercraft also travel on land, which other vessels don’t. Are they still “vessels” then or do they suddenly become “motor vehicles” at that point? And what about gliders or hang gliders? Well, they aren’t hovercraft, that’s for sure. But are they “aircraft” for this purpose? Does an aircraft—or a vessel—need to have a motor, in other words? It’s not clear.

And while there’s nothing in the report to suggest that hovercraft-related ambiguity has become a problem (yet), the vague definitions have posed problems for operators of motorless waterborne craft:

There have been numerous [impaired-driving] charges against canoeists in Ontario, where police vigorously patrol the waterways throughout the summer and the provincial government has stated that canoes, kayaks and even inflatable rafts all count under impaired driving laws.

In 2011, a Waterloo canoeist who’d allegedly been drinking and paddling … had his driver’s licen[s]e suspended for 90 days, leaving him unable to drive his pregnant wife to the hospital for medical checkups (though he could have still paddled her there, as canoes don’t need a licen[s]e).

That same year, a 57-year-old man was charged with operating a pedal boat under the influence …, and also had his licen[s]e suspended.

The charges were dropped in both cases after prosecutors decided there was no reasonable chance of conviction.

In other words, after “catching” people floating under the influence on things for which licenses aren’t required, police have been taking away licenses they do need for things that they didn’t drive drunk at all.

Clearly, something needed to be done, and what’s been proposed is Bill C-46, which has passed a second reading and is now before a committee.

The revised law would apply to “conveyances,” defined to include “a motor vehicle, a vessel, an aircraft or railway equipment.” Among other things, it would repeal the existing definition of “vessel”:

and replace it with the following:

The most obvious improvement stems from Parliament’s apparent conclusion that at this point in history, Canadians know what a “hovercraft” is without needing a scientific explanation. That seems fair. (It also seems to have concluded that with the hovercraft problem resolved, a definition of “aircraft” is no longer necessary, because that’s not in the amended law.) The main thrust of the amendment, of course, is to exclude muscle-powered vessels from the definition, which is what would make drunken canoeing legal—or, at least, clarify that it isn’t illegal. And it does seem to accomplish that.

But for whatever reason, Parliament is still defining things, if at all, only by giving examples of what the definition does and doesn’t include, as opposed to defining them affirmatively—for example, something like “For purposes of this part, a vessel is any object or device equipped with a motor and used as a means of transport on or under the surface of a body of water.” (Gotta address submarines.) Then it’s fine to follow that with a clarification like, “Vessel includes a hovercraft that is being operated on water at the time of the infraction.” But defining something mainly in terms of what it is not seems like a bad practice. For example, I think Parliament’s proposal is still ambiguous as to things that aren’t “propelled” at all—like a floating inflatable raft. Sailboats would be covered, but maybe they go fast enough to be a problem even without motors.

Under my approach, by contrast, I think users of canoes, kayaks, rafts (inflatable or not), pedal boats, inner tubes, logs, swimming horses, human-powered submarines, or any kind of contraption pulled by beavers, for example, would be safe from impaired-driving charges. They would not be safe from the risks of impaired driving, of course, or from the beavers. But they are unlikely to harm others, which is the main (if not the only) thing criminal law should be concerned with.

I look forward to testifying before Parliament in support of my approach.

UPDATE: On October 6, the National Post reported that MPs had voted to amend the bill, removing the new “vessel” provisions. Opponents apparently convinced the committee that the bill might send the wrong message and encourage boating under the influence.