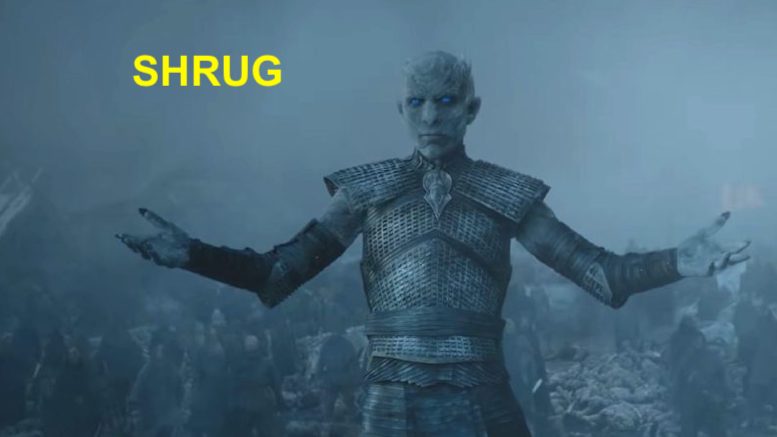 It appears to be Judge John B. Owens, who wrote the opinion for a unanimous court. It could, of course, be his clerk, but regardless, somebody there is still super-upset about how that last season of Game of Thrones played out:

Usually when you see something like this it’s prompted by something else in the opinion—a name or something that triggers the reference. But here it just comes out of nowhere. The case involves application of the Securities Litigation Uniform Standards Act of 1998 to claims brought by the beneficiary of an irrevocable trust, and while I admit I only binge-watched a couple of seasons I don’t remember anything like that coming up.

Maybe “Northern Trust” conjured it up, given that at least half the Stark family died from stupidly trusting people?

More likely, this has just been really bothering somebody for a while and it suddenly just came out the first time the word “meaningless” was used in their presence.

“Well, I believe that argument would render the earlier case meaningless— “I agree, and OH, YOU KNOW WHAT ELSE WAS MEANINGLESS, THAT WHOLE NIGHT KING STORYLINE! GLAD I LOOKED FORWARD TO THAT FOR SEVEN YEARS! AND DAENERYS SUDDENLY BECAME A MASS MURDERER? WHAT HAPPENED THERE? DID SOMEBODY PUT METH IN HER STARBUCKS CUP? SPEAKING OF MURDER, WHY WOULDN’T ABOUT TWO THOUSAND PEOPLE HAVE STABBED JON SNOW AFTER HE ADMITTED HE KILLED THE QUEEN? INSTEAD THEY JUST ALL WENT HOME? ‘OH, OKAY, I GUESS WE’RE DONE HERE. BYE!’ NOT SURE HOW THERE WERE ANY DOTHRAKI LEFT ANYWAY SINCE THEY ALL CHARGED AT THE ZOMBIE ARMY IN THE DARK! LIKE A BUNCH OF IDIOTS! BUT THERE THEY WERE! YOU KNOW? … Anyway, yes, I agree about the Troice case. Good point.”