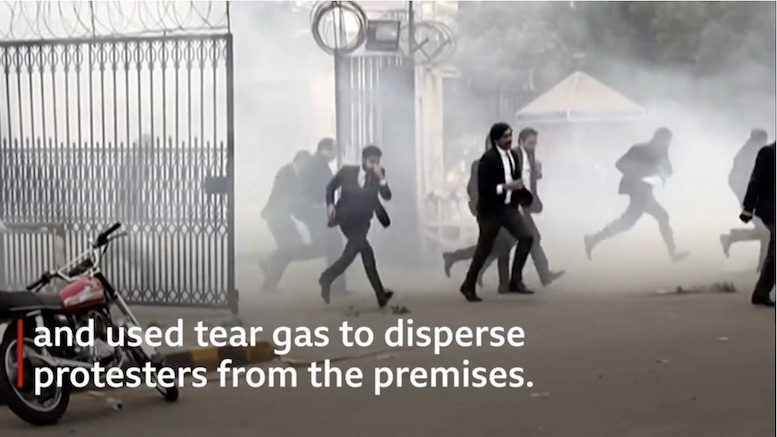 Usually all it takes to disperse a bunch of lawyers is to tell them what they’re doing isn’t billable, but the BBC reports that police in Pakistan had to use tear gas to do it.

According to the report, tensions between doctors and lawyers in Lahore have been rising since November, when a lawyer unhappy with his mother’s treatment got into an argument with hospital staff. He had been accompanied to the hospital by half a dozen colleagues—which I assume means he was expecting trouble, unless the others were planning to hand out business cards—but that still wasn’t enough when hostilities broke out. The argument developed into a “fierce fist fight in which the lawyers were outnumbered by the hospital staff,” and apparently defeated by them as a result. Both sides complained to the police, but no arrests were made. The respective professional associations and provincial authorities then got involved, eventually brokering a compromise in which both sides agreed to stand down.

But then, as is so often the case, social media ruined everything.

Just as things were cooling off, somebody posted a video of a doctor “bragging about how the lawyers involved in the … November episode had been humiliated.” This prompted an “angry meeting” at the local bar association the next morning, it appears, and cooler heads did not prevail. No, they decided the best thing to do would be to storm the hospital and beat people with sticks:

According to hospital administrators, more than 200 lawyers wielding sticks stormed Lahore’s Punjab Institute of Cardiology (PIC) at midday on [December 11]. Hospital officials said the lawyers forced their way past security and split into groups, attacking various departments and wards.

Video footage shared on social media showed lawyers—in suits and ties—smashing medical equipment and windows, and beating up staff and officials…. They also stormed the nurses’ hostel, breaking furniture and beating some of the staff, an official complaint from the hospital says.

Lawyers also damaged several cars parked outside the hospital and set at least one police van on fire.

According to ABC News, the lawyers caused almost $1 million in damages during the hospital assault, and three patients allegedly died because hospital staff had to hide, leaving the patients unattended.

I haven’t looked up the legal-ethics rules over there recently, but I’m pretty sure this technically violates at least a couple. See “Bar Association: Lawyer-Administered Beatings May Be Unethical” (May 31, 2007) (reporting on the breakdown of settlement discussions in an Indian case); cf. “TIP: Beating Client With Baseball Bat Almost Certainly Violates Ethics Rules” (Nov. 2, 2012) (suggesting this violated, at a minimum, Rule 8.4(b)).

The president of the Lahore Bar Association claimed that the lawyers’ protest was “initially peaceful” until the doctors started throwing rocks at them. “He said the lawyers were simply retaliating,” according to the report, “but he did not explain the deaths nor the thousands of dollars in damage to the equipment caused by the lawyers.” He also did not explain why, if this was a peaceful protest that suddenly turned violent due to a provocation, 200 lawyers happened to have 200 sticks handy to smash things with. The hospital should not leave so many big sticks lying around the neighborhood, I guess? Seems negligent. 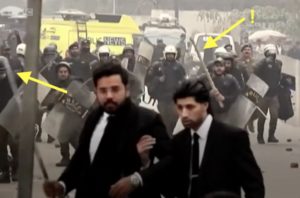 In the BBC’s video clip of the incident, it looks at one point like some of the lawyers—who are easily recognizable by the apparently identical suits and ties they wear—are unloading sticks from a vehicle, so maybe there was a little more planning involved than the lawyers claim. In this image from the clip (right), you can clearly see one of the lawyers wielding a stick of some sort, but you can also see that the local riot police have much bigger sticks, so the advance planning if any was clearly not very good.

According to the reports, over 80 lawyers have been arrested as a result of the incident, and police are still looking for the prime minister’s nephew, a lawyer who reportedly can be seen in some of the video clips of the riot. Whether he was actually taking part or just watching his learned colleagues set things on fire is unclear, though.

“Lowering the Bar” in Vegas