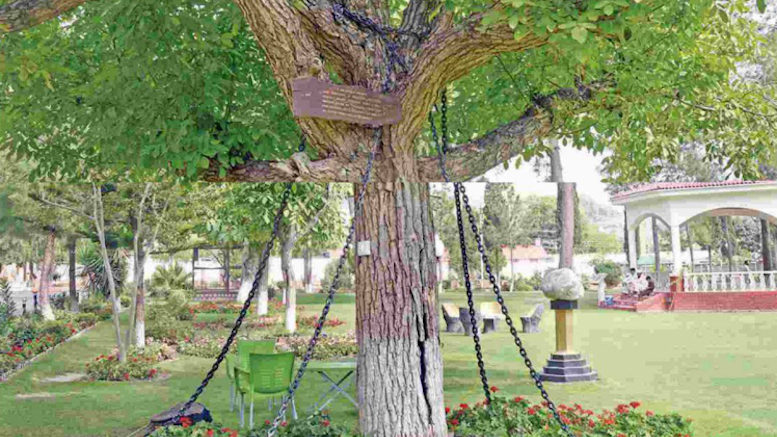 This is not a correction to my report the other day that a tree had been arrested. See “Tree Arrested” (Oct. 27, 2016). That was about a guy pretending to be a tree who was actually arrested. This is about an actual tree that is only pretending it was arrested. Totally different things.

According to many reports in September, in outlets ranging from Instagram and Twitter to papers like the Pakistani Express Tribune and Washington Post, there is a tree in Pakistan that has been under arrest for over a century. The story is that in 1898, when what’s now Pakistan was part of British India, troops were stationed at Landi Kotal in the Khyber Pass. One night, a drunken British officer supposedly thought he saw an old banyan tree lurch toward him. He ordered the tree arrested, it was put in chains, and as you can see above, it remains shackled to this very day.

At least, that’s the tree’s story. 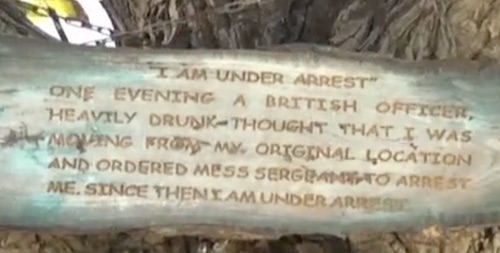 Some reports, like this one in Daily Pakistan, present this as symbolic of colonial oppression:

The tree was put under arrest in 1898, when a British army officer, James Squid, under the influence of alcohol, thought that the tree was moving towards him. Threatened by the tree’s movement, the officer decided to teach a lesson to the offender and issued arrest warrants of the tree.

And much to your surprise, not only warrants were issued, the multi-limbed banyan tree was physically arrested with chains.

Locals say that the captive tree is a symbol of the draconian British Raj Frontier Crimes Regulation laws to teach resident a lesson about not obeying the British….

[T]he story compels the locals and tourists alike to ponder upon the oppression of the British colonial rule, and appreciate the irony of the fact that the champions of human rights now have left such a brutal legacy in the places they ruled.

I wouldn’t challenge that assessment of the colonial legacy in general, but I do have some questions about this tree thing.

Many of the reports either involved questionable sources and/or had no original reporting. For example, though the Washington Post is reputable (yes it is), its article started by quoting a tweet and then stated, “This is apparently a true story.” This did not inspire confidence. It did, though, cite a 2013 item about the tree in the Express Tribune. That seemed like a good lead (although the tree looks very different in that picture): that paper also seems reputable, its report is fairly detailed, and it was the only report at the time—which is good because a simultaneous burst of blog posts or tweets, all citing each other, often means something’s just a rumor. I also found earlier references to the story, one in the Telegraph in 2002 and a BBC report in 2001. So, at a minimum this story wasn’t just dreamed up recently. But this doesn’t prove the event actually happened, of course.

Can we confirm any of the alleged facts? Well, while I had planned to research this at the British Library while I was in London, that didn’t happen (travel tip: the BL isn’t clothing-optional), and it seems unlikely there’d be an official record of a tree-shackling anyway. It is clear that there were British troops at Landi Kotal in 1898; the Brits had been kicked out during a revolt in 1897, but they promptly re-invaded and so were back by the end of the year (some permanently). But there doesn’t seem to have been an actual fort there—or any trees—until some time later. 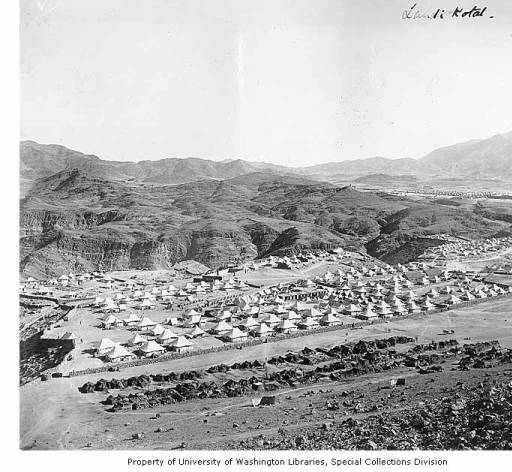 Nor could I find any references to the shackled tree in any 19th-century memoirs or articles, and surely somebody would have mentioned it. (People visit there more often than you think.)

The other problem detail is the name of the drunken officer: “James Squid.” Is it possible to find on the internet a list of all officers serving in the British Army in 1898? Of course it is. Is there a “James Squid” on that list? There is not. Nor was there a “James Quid” or anything similar I could think of. He may not really have been an officer, or maybe somebody added a detail to what was otherwise a true story. But on the whole it seems very doubtful.

There is also, of course, the point that arresting a tree would be stupid. And even if alcohol was to blame, why leave it that way once you sober up? It strikes me that the British Empire was pretty good at making examples when it thought examples were necessary, and it didn’t do that by arresting local plants. They’d just, I don’t know, maybe invade and kill a lot of the troublemakers? Like they had just done the year before? So while this is an odd story for somebody to just make up, a story invented for tourism-enhancing purposes still seems like the most likely explanation.

Even if the tree had been arrested at some point, it seems odd to consider it “under arrest” now. For example, under U.S. law, at least, a “seizure” has occurred for Fourth Amendment purposes as soon as police restrain a citizen’s freedom of movement. But you can’t “restrain” something that can’t move to begin with. So if the tree doesn’t care, why should we?

Of course, as the U.S. campaign proves, who cares about the so-called “facts” if you’ve got a story that’ll piss off the right people? They’ll take it seriously, or pretend to. This is no exception. “Shackling a tree is a clear violation of Islam

ic teachings and humanity,” one local resident told the Express. It is? Okay. I’m not going to challenge anybody’s interpretation of the Koran. I would point out, though, that the British have been gone for 60 years. It’s okay to free the tree at this point.

Karma Chameleon Will Do Community Service With NY Sanitation Department