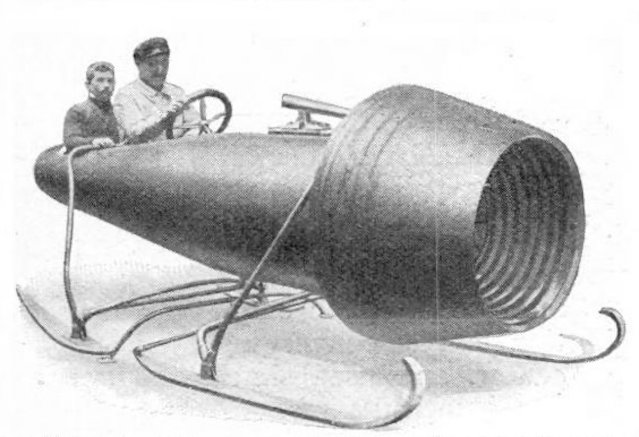 A guy who looks like Stalin being driven around in a Russian motor vehicle (Popular Mechanics, Mar. 1911)

It continues to be surprisingly difficult for courts to decide what a “vehicle” is, although to be fair state legislatures don’t always make it easy for them.

This of course is an issue we’ve dealt with before, but usually in the context of prosecutions for DSUWI (Driving Something Unusual While Intoxicated). Zambonis, wheelchairs, motorized bar stools, motorized picnic tables, motorized beer coolers—all have been the subject of disputes about whether they qualify as “vehicles” or “motor vehicles” under various state laws. In a case decided yesterday (April 30) by the Washington Supreme Court, the question was simply whether a woman who stole a snowmobile broke the law prohibiting “theft of a motor vehicle.” Seem pretty straightforward? The court split 5-4.

Just three years ago, it split three ways on the question whether a riding lawn mower is a “motor vehicle” under the same statute, so this has really been causing some angst up there.

In the 2017 case, State v. Barnes, a defendant who had been unable to successfully steal a riding lawn mower somehow managed to convince a majority of judges that this vehicle, which had a motor, was not a “motor vehicle.” The criminal code itself doesn’t define the term, but it is often acceptable to look at other statutes to get a clue about what the legislature might have been thinking. Here, it seems logical to look for such clues in Title 46, “Motor Vehicles.” Surely that will answer the question.

Or, you could do what the first three judges in Barnes did: ignore both of these. The legislature didn’t define the term in the criminal code, the court held, so we’re just gonna look it up in the dictionary. According to Webster’s, a “motor vehicle” is “an automotive vehicle not operated on rails; esp: one with rubber tires for use on highways.” So this law must be about automobiles, which a riding lawn mower is not. A second group of three agreed with the result, but not with finding it in Webster’s. That group looked at legislative history (which also pointed to automobiles) and believed a narrow interpretation was better since this is a criminal law. But the three remaining judges dissented. We have a definition of “motor vehicle,” you guys: it’s any vehicle that’s self-propelled. This one is, so pencils down. But they were outvoted.

Yesterday’s opinion involved snowmobiles. Is a snowmobile a “motor vehicle”? Well, gosh, it depends who you ask. The Court of Appeals, applying Barnes, had said no, because this law only applies to automobiles, and this is not an automobile. Pretty straightforward.

Now the Barnes dissenters had their revenge. Guys, we have a definition of “motor vehicle” already, remember? It’s a self-propelled device capable of transporting things upon a public highway. “Where, as here, the legislature has provided a definition,” the majority held, “we are not free to create our own,” or to look it up in Webster’s. And it’s just common sense that a snowmobile fits that definition. Who could disagree?

Well, almost half the court.

Those four reasoned that they’d already held (on various grounds) that the statute only applies to automobiles, and a snowmobile isn’t an automobile. I mean, that’s just obvious. But—apparently aided by one new judge and one defector from Barnes—the majority held that the criminal statute “unambiguously includes snowmobiles.”

Although it doesn’t mention them.

Remarkably, all the different alignments of judges in these cases have plausible arguments about how to read these ambiguous statutes. And I might go into more detail about those, if I hadn’t written over 2,000 words yesterday on a rock-paper-scissors case, thus probably exhausting everyone. For now I will just say that if you want or need an example of judges applying different rules of statutory interpretation and getting different answers, well, you might want to rethink your life choices, but if not, these are the opinions for you.

The Declaration of Independence