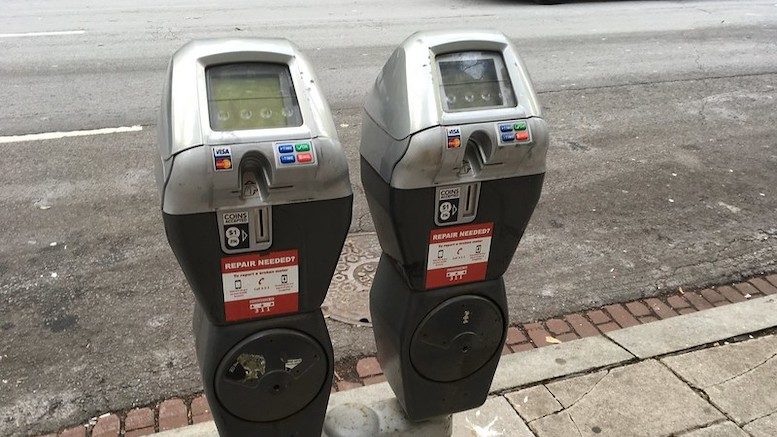 Yes. At least in the Ninth Circuit.

In Pimentel v. City of Los Angeles—a case that involves a $63 parking fine and has now been pending for almost seven years—nine L.A. residents are challenging the city’s practice of charging “disproportionately excessive penalties” on tickets for expired parking meters. Specifically, they alleged that the fine, on its own and especially when compounded by late fees, violated their rights under the Eighth Amendment’s Excessive Fines Clause, the 14th Amendment’s Due Process Clause, and similar state provisions.

I usually don’t include names in these things (though all relevant names are public anyway). This is partly out of respect for their Google search status, a policy I implemented at the request of a woman who realized too late that she shouldn’t have agreed to be the named plaintiff in a ridiculous case. See “Reasonable Consumer Would Know ‘Crunchberries’ Are Not Real, Judge Rules” (June 2, 2009). The policy doesn’t apply to those who are more clearly public figures and/or stupid and/or reprehensible; examples abound. It also doesn’t apply when I want to make fun of a sentence like this one from the district court’s opinion:

Not the plaintiffs’ fault, of course. Caused by a terrible virus from which almost all lawyers suffer. Simple precautions can help prevent it, making this all the more tragic.

Anyway, the plaintiffs (“the plaintiffs”) said they had been cited for one or more violations they either didn’t or couldn’t afford to pay on time. This last fact makes the case less ridiculous than it seems, because there is a real problem with imposing fines on people who can’t afford to pay, and then fining them again for not paying, and then jailing them, which doesn’t help them earn money, all contributing to the already vicious circle of poverty. Not clear this was the issue for all the plaintiffs, however. In any event, the district court rejected their claims, and they appealed.

On July 22, the Ninth Circuit affirmed as to the initial $63 fine. But it held the plaintiffs had stated a claim that the additional fees might be unconstitutional, so it reversed that part of the decision and remanded.

Excessive Fines Clause? What’s that? This:

Excessive bail shall not be required, nor excessive fines imposed, nor cruel and unusual punishments inflicted.

Sorry, that’s the Eighth Amendment—the Excessive Fines Clause is the part in the middle. It might come as a surprise to see the “cruel and unusual punishment” part stuck on at the end, but that makes some sense, historically. As the opinion points out, concerns about excessive fines go back at least to the Magna Carta, which, as you know, provided that “All fish-weirs shall be removed from the Thames, the Medway, and throughout the whole of England, except on the sea coast.” And, although the removal of most royal fish-weirs is certainly the Magna Carta’s most important legacy, it also said this: “For a trivial offence, a free man shall be fined only in proportion to the degree of his offence, and for a serious offence correspondingly, but not so heavily as to deprive him of his livelihood.” It doesn‘t say anything about, let’s say, burning people alive or drawing and quartering them, but imposing excessive fines on a baron? Definitely not okay.

So when is a fine unconstitutionally excessive? Well, when it’s “grossly disproportional to the gravity of the defendant’s offense.” There’s a four-factor test, but it doesn’t add much, frankly. Most excessive-fines cases involve criminal asset forfeiture assets, something the government really enjoys, as we’ve discussed. So the principle is well established. But the Ninth Circuit has now, apparently for the first time, extended it to municipal fines.

Applying the test above to the $63 parking fine, the Ninth Circuit decided it wasn’t excessive. Why? Well … because the violation was minor but $63 didn’t seem like a lot. There are some words about harm caused by congestion and the impeding of traffic flow and blah blah blah, but I think my analysis is pretty accurate. In fact, the court actually says, “While a parking violation is not a serious offense, the fine is not so large, either….” So there you go.

On the other hand, the court did agree that there was a potential concern about the late fees, which can be up to $118 depending on lateness. But it decided more information was necessary, so it sent the case back down.

One judge wrote separately to say he “do[es] not believe the Excessive Fines Clause should routinely apply to parking meter violations.” He asked whether the city was really acting as a government to “extract payments” from people here, or more like a landlord and just renting spaces. If the latter, he didn’t see a problem. The Supreme Court has not yet recognized a constitutional right to park, he noted, which is true. His real concern, though, seems to have been the potential flood of constitutional litigation over parking fines:

Because, as Rousseau noted, “the world of imagination is boundless,” I am sure some creative municipality could devise a parking scheme that runs afoul of the Constitution. But that should not mean that every municipal parking scheme is subject to attack under the Excessive Fines Clause and the Civil Rights Acts.

He concurred instead of dissenting, however, because the city apparently forgot to make this argument (a mistake it will surely fix, if it can). In the meantime, the floodgates are open.

In Case Relating to Internet, Be Sure to Explain to Judge What an “Internet” Is

A Few Signs That Martin Shkreli Might Be In Some Trouble