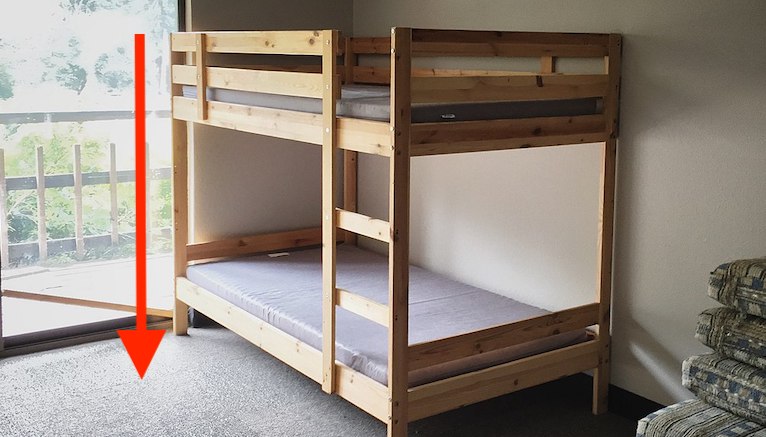 “[N]o danger is more commonly realized or risk appreciated than that of falling,” the Georgia Court of Appeals wrote in 2006, and while that sentence is not going to win any awards, it states an important truth.

It seems very likely that the first thing to crawl out of the sea and then up onto a rock promptly fell off that rock, and if that rock had been just a little taller we wouldn’t be having this discussion. The evolution of legs surely led immediately to the invention of tripping. And of course human beings have almost certainly been falling off or out of things—and, more importantly, onto other things—since before they were human beings. The first recorded falling injury I can find appears in the Old Testament (2 Samuel 4:4), which tells how Mephibosheth fell and hurt his legs. (More specifically, somebody dropped him.) My point is, it has been well known for quite a while that what we now call “gravity” can cause injuries.

And yet people still claim they need to be warned about this.

Of course, this isn’t news to you, because you remember when we discussed Mathews v. University Loft Company, and I know that seems like only yesterday but it was in fact 14 years ago. See “NJ Appeals Court Holds No Duty to Warn About Gravity” (Aug. 18, 2006). In that case, the plaintiff was a college student whose shoulder had been injured after he fell out of a bunk bed. I use the passive voice deliberately, of course, to signal that the parties disputed liability. According to the bunk-bed manufacturer, the plaintiff was responsible for falling out of bed. According to the plaintiff, the bunk bed should have come with a warning that he might fall out of it. The headline above gives away the ending, I suppose.

But I suppose every new generation has to learn about gravity for itself, which would explain Valdosta State University v. Davis, decided by the Georgia Court of Appeals on August 17. There, just as in Mathews, a college student was injured after she fell out of a bunk bed. Or, at least, everyone inferred this from her testimony that (1) she fell asleep in the top bunk and (2) later woke up on the floor in pain. Her roommate was present when she woke up, but it’s not clear whether she or any other witness could actually connect the dots between (1) and (2). But, precisely because of the human race’s lengthy experience with gravity, some of which I have recounted above, it does seem like a fair inference that a fall caused her injuries. But who, if anyone, was responsible for the fall? This, only a lawsuit could determine.

Unlike Mathews, Davis does not seem to have sued the manufacturer on the theory that it should have warned her of the risk. But she did sue the university for negligence, saying that it “had notice of the specific risk of falling from the lofted [sic] beds due to similar incidents at other schools” within the University of Georgia system, and therefore had a duty to install safety rails on the top bunk of her bed, and presumably every bed within the University of Georgia system, to prevent such incidents. The university moved for summary judgment, basically arguing that yes, it had notice such things could happen, but then so did the plaintiff. The trial court denied the motion, and the university appealed. (Normally there would have been a trial first, but the court allowed an immediate appeal in this case.)

This was a premises-liability claim, which under Georgia law requires a plaintiff to prove, among other things, that (1) the owner knew about the risk and (2) the plaintiff did not know about the risk (but reasonably should have). Whatever the defendant knew, therefore, a plaintiff “cannot recover if it is shown that the hazard was open and obvious.” Usually, as the court noted, that’s an issue for the jury. But not if the evidence is “plain, palpable, and undisputable,” and “this is such a case.”

Specifically, there was no dispute that the university knew the bed was “lofted,” posing the aforementioned risk of gravitational injury. But the evidence also made clear that Davis knew that, too. The court devotes several sentences to its reasoning on this point, though, frankly, one probably would’ve been plenty. Here is that paragraph, slightly revised by me:

Indeed, Davis slept in the bed for approximately three months prior to her fall [and it would take a reasonable person no more than six weeks to realize something is elevated]. Moreover, soon after arriving at school, she [asked] to have the bed lowered, which shows that (1) [she knew it was high], and (2) [a reasonable person would know about falling]. Davis also installed a safety rail on the bed when she returned to school, [further demonstrating she knows about gravity]. And significantly, we have repeatedly held … that “no danger is more commonly realized or risk appreciated than that of falling.'”

The court cites quite a few cases in support, and at first I was surprised that it doesn’t cite Mathews, but clearly there is no shortage of cases involving not just the obvious risk of falling but the obvious risk of falling out of bunk beds. See Davis, 2020 WL 4745074, at *3 n.18 (citing, e.g., Yun v. Great Wolf Lodge of the Poconos, LLC, 182 F. Supp. 3d 182 (M.D. Pa. 2016) (granting hotel’s motion for summary judgment based on conclusion that “the risks associated with a bunk bed were known and obvious”).

I’d suggest that you make a note of this, but I guess it’s either obvious or it’s not.

Criminal Defendant Escapes After Being Mistaken for Lawyer