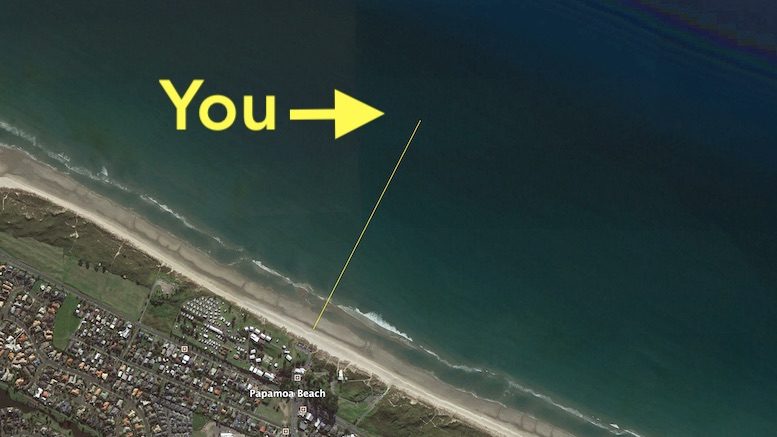 Good luck with that. (Google Earth image, annotated by me)

You don’t listen to me anyway. How many times now have I tried to tell you that making water travel any part of an escape plan is almost certain to end in failure? Well … many, that’s how many. For example:

And that’s just a partial list. But do you listen? No. Is there proof? Yes.

Grand Forks, B.C., July 27: In this near-perfect example of the futile aquatic-evasion genre, you stole a car in Washington and fled into Canada, later leaping into the Kettle River, where you “floated for two and a half hours to avoid being caught.” You did not, of course, “avoid being caught.” Did you at least choose a surging river at flood stage for a high-risk, high-reward escape attempt? No. In fact, it was fairly placid. This enabled authorities to conduct a daring operation to seize you, one that entailed “walking along both sides of the river bank” until you gave up. (The CBC described this as “leading police on a two-and-a-half-hour-long float chase,” which really seems to overdramatize this event.) There’s a pretty good image here of you floating, or possibly wading, but definitely not escaping. (Bonus points: this report says you are “known south of the border as the ‘naked in Canada guy,'” but after briefly considering what the Google results for that phrase are likely to be, I have declined to investigate further.)

Pittsburgh, PA, Aug. 2: After a two-car crash in the city’s South Oakland neighborhood, you jumped into the Monongahela River “to flee law enforcement,” the Tribune-Review reported. In an attempt to flee, it should have reported, because, again, this couldn’t really be “fleeing” unless you were in some seriously thundering rapids, which you were not. And so, of course, you too “eventually swam to the riverbank where [you were] taken into custody by police,” on an outstanding warrant and because you left drugs in your car, dummy.

Pusselbo, Sweden, Aug. 12: Police searching for you, who are suspected of a crime the report does not disclose, got a tip that your car was parked near a local bridge. You were there when they arrived, and then what happened? Well, var hon helt ointresserad av att samarbeta och istället kastade hon sig ut i älven, that’s what happened, which I am told means you were “completely uninterested in cooperating and instead threw [your]self into the river.” But you and I both know you were trying to escape, because (1) the bridge isn’t very high and (2) you had a male accomplice who stole a boat to help you get away. Intending to help you get away, that is, because of course he only succeeded in getting himself arrested, too. That’s what happens when you try to escape by water, as you both should know by now.

Vancouver, B.C., Aug. 20: In this incident, citizens reported you were roaming around a waterfront park “acting paranoid, appearing agitated, and speaking in nonsensical sentences,” and after checking to make sure you weren’t the President of the United States they sought to detain you. But you leapt into the water and swam to a nearby boat, then to other boats, while police monitored you at their leisure with a drone, which they probably didn’t need to do but hey, good drone practice. You surrendered to the Coast Guard shortly thereafter. (On reflection, it strikes me that this may just involve mental issues, not criminal behavior, but I like the joke about the president so I’m leaving it.)

Holme Pierrepont, U.K., Aug. 23: You and a friend were “acting suspiciously around vehicles” last Sunday when you spotted police, who had also spotted you. You fled in your car (it may have been someone else’s), driving across rugby pitches and a public footpath “before [the] car entered the river, in an attempt to evade officers.” I suspect this paraphrases a quote that police gave the reporter, as it blames the car for the incident in the same way police here tend to blame bullets for the death of a fleeing individual. No, you made the decision to drive an innocent car into the Trent River in an attempt to evade officers, despite my many warnings. You and your friend both escaped from the vehicle, but you did not, of course, escape from the police. Even worse, you tried to escape by water in a vehicle not designed to travel in that medium. It wouldn’t have worked anyway, but here not only did you get arrested, “the car floated off down the Trent.” (Police recovered it, so it did not escape, either.)

Berkeley, CA, Aug. 24: You, a convicted felon, for some reason are free and therefore able to go around the Berkeley marina smashing car windows. When police arrived, you brandished a knife at them and then ran under a bridge. But you know what? They saw you run under there. Then they tried to negotiate (and I was going to say they “showed admirable restraint” in doing so but then I remembered that’s what they’re supposed to do instead of, for example, just shooting you in the back). But did you just surrender, like I keep suggesting? Nope! Into the Bay you went. Perhaps you planned to strike out for San Francisco, or hoped to reach Alcatraz, or possibly the Pacific shipping lanes, where you might catch a favorable trade wind, bound for the Orient. If the latter, you ended up about 5,000 miles short of your goal, clinging to a wooden pole 75 feet offshore in the cold water of San Francisco Bay for a while before being ignominiously being towed back to shore behind an officer’s jet ski.

Papamoa Beach, New Zealand, Aug. 28: Finally, just yesterday, or whenever that was on that side of the planet, you tried “to escape police custody by running into the sea.” And I have to ask, do you even know where New Zealand is located? Because assuming you swam straight out to sea from Papamoa Beach, you could easily miss Motiti Island, and the first land mass you’d be likely to hit after that would be Tonga, which is 2000 kilometers away, my friend. Even Motiti is more than nine kilometers away. Granted, you made it 750 meters out before finally giving up, and that’s impressive. But it’s not an escape, primarily because, unlike you, they had a boat (and a helicopter). This is why, like so many such reports, this one includes an image captioned “Police waiting for the man to be brought ashore so he can be arrested.”

But go ahead. Give it a shot. Run into the sea. You’re the experts. Just remember I tried to tell you it was a waste of time.