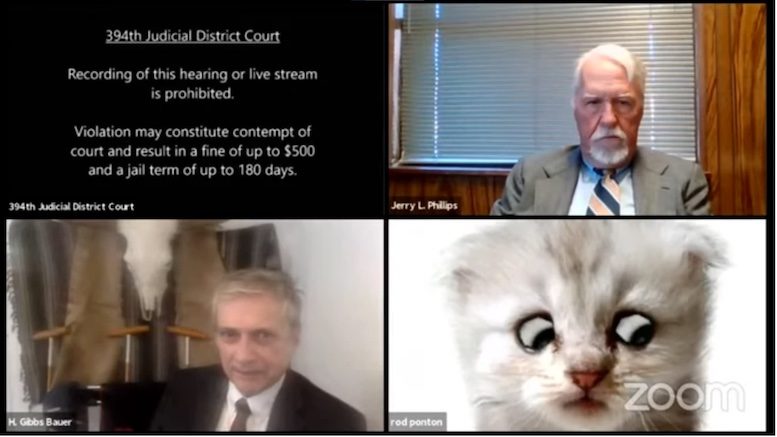 The moment when he realizes the cat filter is on (image: YouTube/394th Judicial District Court)

As you can see, any recording of live-streamed hearings in Texas is normally prohibited, but in this case the judge has expressly stated that this excerpt can be used for “educational purposes.” The lesson being that one should make sure any Zoom filters have been turned off before joining a hearing:

This has gone viral today, to say the least, but it does appear to be real. Judge Roy B. Ferguson is in fact a judge in Texas’s 394th District Court, although this clip doesn’t seem to be on the court’s official live-stream page. Some media sources (for example, Vice.com) have said they were able to reach the participants, including the temporary cat-man, who said he had been using his secretary’s computer and “for some reason she had that filter on.”

While he says in the clip that he was “ready to proceed” with the filter still on, which offered the prospect of an entire hearing at which a cat would be arguing on behalf of one party, it appears that the filter was successfully removed. “It was taken off,” he said, “and we had the hearing as normal.”

As others (including the judge) have pointed out, this is the sort of thing that could happen to anyone, which is why the judge says he released it for “educational purposes”:

Media outlets, you may use the video. It was recorded during a virtual hearing in the 394th DC of TX, and released for educational purposes. It is crucial that this not be used to mock the lawyers, but instead to exemplify the legal community’s dedication to the cause of justice.

For that reason—and because I’m sure this could also happen to me, and probably will at some point—please be aware that I am not in fact using it to mock the lawyers, but instead in the interests of justice.
SHARE TWEET PIN SHARE