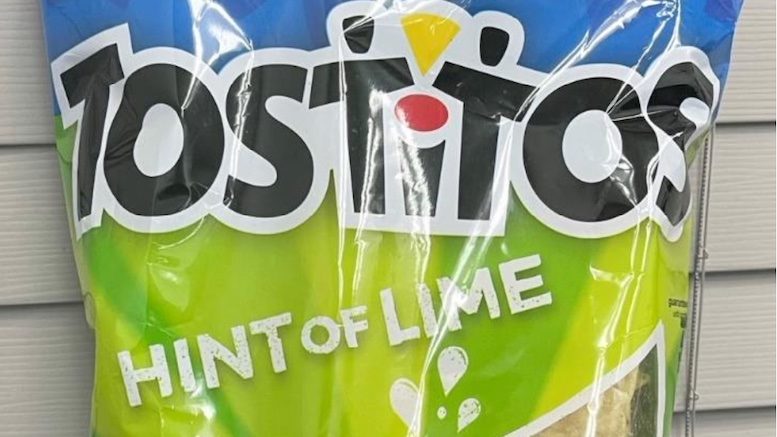 ALERT: Bag Contains No Limes, Only a Hint of Them

A federal lawsuit filed last month against Frito-Lay North America Inc. has alleged that the maker of the corn chips, potato chips and other snack foods misleads consumers by touting a “Hint of Lime” in Tostitos chips that apparently contain only a “negligible amount of lime.”

A lawyer in New York has apparently learned, after what I can only assume was years of diligent research by a board of scientific experts, that reasonable consumers believe the word “hint” in “Hint of Lime” indicates that the tortilla chips so labeled will contain a significant amount of real lime, and yet the aforementioned chips do not actually contain as much real lime as said reasonable consumers believe. What is the disparity, you ask? Allegedly, a reasonable consumer believes “hint” means not less than a “a slight but appreciable amount,” whereas the defendant chips contain only a “negligible,” “de minimis,” or “trace” amount.

A federal lawsuit has been filed to redress this yawning disparity.

Some of you will recall what is certainly one of the dumbest consumer lawsuits ever filed in the United States, namely the case in which a woman claimed she bought “Crunch Berries” cereal because the ads led her to believe it contained a significant amount of real fruit, a case that even in California was held too dumb to get past the pleading stage. See “Reasonable Consumer Would Know ‘Crunchberries’ Are Not Real, Judge Rules” (June 2, 2009); see also “UPDATE and Comment on the Crunchberry Litigation” (June 12, 2009). At about the same time, other lawyers filed complaints that made similar allegations about “Froot Loops.” By my count, in fact, there were no fewer than nine such cases involving these two products. All of which failed, primarily because courts were willing to take judicial notice that (1) “crunchberries” are not a real fruit and (2) “froot” is also not real fruit. A reasonable consumer would not, therefore, believe that products labeled with those words would … you know what, I don’t think I need to spell it out.

This “Hint of Lime” case immediately reminded me of the froot litigation, although I would have to concede that it is not quite as dumb, simply because a lime is a thing that exists. So a reasonable consumer could, theoretically, associate the real and actually existing fruit known in English as the “lime” with the “lime” at which the Tostitos bag so deviously hints. But how much lime would such a consumer believe Tostitos chips contain? That is what a jury will have to determine after years of discovery and after hearing expert testimony on the matter, or at least it would have to do that if the judge weren’t almost certainly about to dismiss this thing so fast the paper will burst into flame.

The complaint, which I have embedded below, is quite similar to the complaints in other consumer-protection cases of this kind, only stupider. These complaints generally begin by exalting the importance of the allegedly misrepresented thing to the reasonable consumer, to make it a little more plausible that such a person would base his or her buying decisions on that thing. And this complaint is no exception. We are told that the consumption of limes has skyrocketed since 1990 (though it doesn’t tell us what happened that year—maybe there was an outbreak of scurvy?), and that “market price data confirms the popularity of limes, as their price has risen consistently over the past two decades.” (Has the price of almost everything “risen consistently over the past two decades,” because of something called inflation? Yes, now quiet down.) Americans love limes for many reasons, the complaint alleges, not least of which is “the growing American appreciation for aspects of Hispanic cultures, where the lime has long been afforded primacy among fruits.”

Primacy among fruits! Now, that is some terrific bullshit, friends. Beef this complaint up just a little and you’d need to have James Earl Jones reading it: “The Aztecs believed the lime was brought to this world from the morning star by the feathered serpent god Quetzalcoatl, and they long afforded it primacy among fruits.” Just terrific. Best of all, there’s absolutely no way to disprove it. Which “Hispanic cultures” is he talking about? How do you tell when a fruit has “primacy”? Do the other fruits defer to it somehow? Well, I suppose all that will be up to the jury. (No it won’t.)

As usual, allegations about the real person acting as the “plaintiff” in this lawsuit are virtually nonexistent. And yet the two sentences offered here still manage to be dumb. Plaintiff alleges she bought Hint of Lime Tostitos “because she expected it would have more of the named fruit ingredient [i.e., lime], not just for flavor but for its nutritive value.” (Laugh if you will, but archaeology has proven that the ancients who once inhabited the Iberian Peninsula greatly valued the lime-flavored nacho chip for its nutritive value, and they long afforded it primacy among chips.) How much more lime ingredient did Plaintiff expect it would have, exactly? “[M]ore lime ingredient than there was.” But it didn’t have more than there was. It only had what it had. I have nothing further, Your Honor.

Anyway, if you also bought Tostitos chips for the nutritive value inherent in the hint of lime they contain, you may be a class member in this lawsuit. But I wouldn’t wait by the mailbox for your claim form to arrive. This one has maybe 60 days to live.