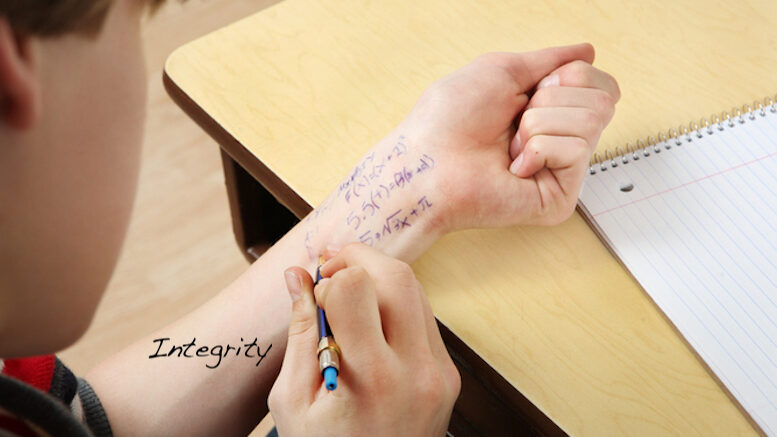 Easy to fit on your arm

“We have repeatedly and consistently taken steps to reinforce our culture of compliance, ethics, and integrity in the past,” a spokeswoman for accounting firm Ernst & Young told the Washington Post. I have no reason to think that’s not true. I do have a reason to think it didn’t work.

The reason is that Ernst & Young was just fined $100 million—the largest fine the SEC has ever imposed on an accounting firm—after evidence emerged that hundreds of auditors there cheated on the tests they are required to take to get or keep their professional licenses. “It’s simply outrageous,” said the SEC’s enforcement director, “that the very professionals responsible for catching cheating by clients cheated on ethics exams, of all things.” Outrageous, yes, but in a sense also kind of hilarious.

The agency found that beginning in 2017, 49 Ernst & Young professionals shared or received answers to ethics exams they needed to pass to get licensed as certified public accountants. Hundreds more cheated on courses they needed to take to maintain their standing with state oversight boards, while others who didn’t participate themselves helped facilitate the behavior, the SEC said.

The firm’s leaders then covered up the activity, failing to report it to the SEC after the agency asked Ernst & Young about complaints it had received and the company launched an internal investigation that confirmed the misconduct, according to the SEC.

To be clear, Ernst & Young did repeatedly tell its people not to cheat, just in case they didn’t know not to do that. It has also taken action against many of the cheaters. But it apparently didn’t report everything it knew at the time of a June 2019 request by the SEC, which seems to be what cost it $100 million.

The company’s code of conduct is pretty general, but does say that people are expected to comply with “laws, regulations and standards that apply to … our professional conduct,” specifically referring to “ethics,” and also says people are expected to act with “integrity.” The SEC also referred to “integrity,” and it also cited section 1.400.001 of the AICPA Code of Professional Conduct, which prohibits accountants from committing “any act discreditable to the profession.” So to answer your question, no, the rules did not specifically say “don’t cheat on ethics exams.” I guess they just assume you will know that cheating is a non-integrity-showing activity and a “discreditable” act.

And, in fact, it turns out at least some of them did know:

Many professionals acknowledged during the firm’s investigation that their conduct violated [Ernst & Young’s] Code of Conduct, but they cheated because of an inability to pass training exams after multiple attempts.

FYI, the SEC does not consider that a good excuse.

On the other hand, some seem to have claimed they didn’t know this:

Nobody likes to report a colleague (unless maybe the colleague is Donald Trump, in which case at least some people do), but kudos to those brave professionals who asserted that they did not report exam-answer sharers because they did not “appreciate” that sharing exam answers constitutes cheating. Perhaps they should consider the legal profession instead?

The answer to that question, of course, is no, because the ethics rules in our profession contain any number of similar traps for the unwary. See, e.g., “Disbarment for Lawyer Caught With Zipper Down” (Feb. 3, 2021); “TIP: Beating Client With Baseball Bat Almost Certainly Violates Ethics Rules” (Nov. 2, 2012); “‘Esquire’ Could Mean Lots of Things, Says Guy Not Licensed to Practice Law” (Aug. 29, 2012), and many more. Some ethics questions are even trickier than these, so please act with caution.

New Tax Strategy: Trip and Fall at the IRS Office