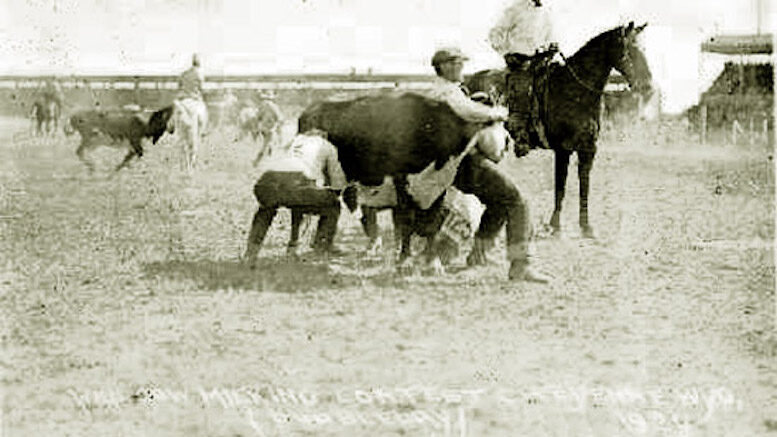 Milking a wild cow in Wyoming, 1924 (photo by Ralph Doubleday, posted at www.wyomingtalesandtrails.com)

I was informed today that supervisors in Alameda County—just across the bay from San Francisco but with issues all its own—voted on Tuesday to ban the practice of wild cow milking in unincorporated parts of the county.

I learned at exactly the same time that there is a practice of “wild cow milking.”

Wild Cow Milking is a timed competition that begins when a cow is turned loose into the arena. Out of a two-man team, one ropes the cow while the other tries to mug it. Then the roper jumps off his horse and tries to milk the cow until they get a small amount in a bottle.

The clock usually stops after the cow is milked and a team member runs with the bottle to a designated area. For the time to count, there must be enough milk in the bottle to produce at least one drop when it’s turned upside down.

I understand all those words and concepts except for “mugging,” which appears to be the act of grabbing and holding the animal’s head. The roper does the roping while the mugger does the mugging, after which the roper becomes the milker and usually also the runner, who runs the bottle to the designated area when and if milk has been extracted. The team that extracts at least one drop in the shortest time wins.

According to Wikipedia, wild cow milking dates back to at least the early 20th century, at least in the United States, which I would not be surprised to learn is the only nation in which this is done. The photo above, which I found at Wyoming Tales and Trails, shows an example said to have taken place in that state in 1924. The Professional Rodeo Cowboys Association does not include wild cow milking as an officially sanctioned event, but it seems to be relatively common all the same.

So what’s the problem? Well, the wildness, I guess. Or, maybe rodeos in general?

“Rodeos have had their brutal day, and now, like those Confederate statues, belong in the dustbins of history,” anti-rodeo organizer Eric Mills argued at an Alameda County supervisor’s meeting in August, according to the [San Jose] Mercury News. Animal-rights activists like Mills consider the spectacle cruel and inhumane and have mobilized and advocated for the ban for years.

So, rodeo cowboys are like Nathan Bedford Forrest? That analogy might be a little overheated, especially if the issue is cow milking. Alameda County has previously banned “mutton busting,” an event where children ride on the backs of sheep (or try to). Veterinarians reportedly say that this can injure sheep because their backs aren’t strong enough for even tiny people to ride on them, so okay. But it’s not like wild cow milking is as bad as, you know, child abuse or rape or something like that.

In any event, the effect of the Board of Supervisors’ vote Tuesday was to amend the county ordinances to read as follows:

B. No person shall intentionally milk or attempt to milk a lactating bovine animal (including but not limited to, any calf, ox, heifer or cow) by any means whatsoever for the purpose of entertainment or sport, including during a rodeo or practice for a rodeo.

As you can see, unintentional bovine milking is not a violation, and the same would be true of even an intentional attempt to milk a non-lactating bovine animal. But if you tried that, you’d probably have more to worry about than violating this ordinance. I’m not an expert, but that is my belief.

This leaves what obviously is the most important question about this activity still to be answered: is it “wild cow milking” or “wild-cow milking”? It’s not hyphenated in any of these reports, and I think that’s probably right. While Wikipedia says it involves “semi-feral” cows that aren’t used to being milked, the article it cites doesn’t support that. According to that article, these people aren’t trying to milk wild cows, they’re engaged in a cow-milking event that gets wild:

[T]here is a reason “wild” is included in the event name.

“Whenever she is separated from her calf, the cow really doesn’t want to be in that arena,” [rodeo director Chris] Reed said. “She can get a little mad, which is why they call it wild cow milking. She might run over the cowboys and kind of make crumpled meat out of them.”