Fool for a Client 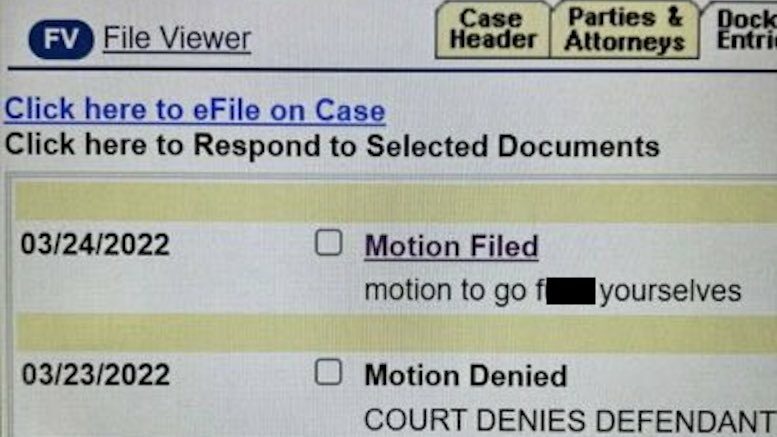 I assume he meant to type "motion for reconsideration"

The docket also reveals that the defendant has been charged with second-degree burglary and the theft of $750 or more, both felonies under Missouri law. The complaint was filed in October 2020, and the defendant has apparently been jailed and re-jailed a couple of times when a bond he posted was revoked. Mr. Merritt has written numerous letters to the court, some of which are listed as motions and others just as “correspondence.” The docket also suggests he has failed to cooperate with defense counsel—more than one defense counsel, actually—and has been difficult enough that one of his lawyers filed a motion asking the court to approve a mental examination. The court did approve that, and the evaluator found Merritt was “competent” to represent himself as he had been wanting to do, though here “competent” only means “mentally able,” not that he’d be any good at it.

Merritt is also clearly no fun at hearings. Here’s an entry from last November: “The Court attempted to inquire of the Defendant to determine if his waiver of right to counsel was voluntarily and intelligently made but was unable to complete the inquiry due to the Defendant’s disruptive behavior and use of profanity during the court hearing.” At a later hearing, the court refused to accept the waiver, although it’s not clear from the docket entry whether Merritt actually has serious mental issues or has just succeeded in being so irritating that nobody can get anything done:

At the conclusion of the hearing, the Court denied the Defendant’s request to waiver of right to counsel. The Court understands that a defendant has the right to represent himself at trial. However, this Defendant indicates he has no knowledge of the court process including how to pick a jury or present evidence. The Defendant has repeatedly exhibited disruptive and incorrigible behavior in the courtroom by the use of profanity toward the court and his attorney and interrupting attorneys and the court when they are speaking. In addition, the mental evaluation … indicates that the Defendant has been diagnosed with Antisocial Personality Disorder which is consistent with his courtroom behavior in the case.

Many more letters and “motions” followed, including motions to recuse the judge; motions to fire appointed counsel; a “motion for a fast and speedy trial,” something all these motions aren’t bringing any closer; and something called a “motion for a conflict of interest.” It looks like that as trial gets closer, Merritt is filing more and more of this stuff and doing so on his own. There was a flurry of such motions about two weeks ago, none of which seem to have been granted, surprisingly, and apparently the denial of a “motion to reconsider motion to withdraw as counsel” on the 23rd prompted the aforementioned “Motion to Go F*#& Yourselves.”

I do have a copy of this motion, or rather a tiny image taken from someone’s phone that when expanded is too blurry to read easily. If my forensics team is able to enhance it, I’ll post it, for what it may be worth. I can tell you that it is a one-page motion, with a proper caption, and it does indeed begin, “This is Logan Wayne Merritt and I am filing this motion to request that you all go f*#& yourselves.” I can’t quite make out the names of those being requested to do this, but most if not all are preceded by “Judge” or “attorney.” Merritt also notes that he “will not plead guilty under any circumstances,” although it looks like he might make an exception if someone (I can’t tell who) provides sexual favors. He also claims to be “looking forward to going to trial,” which he “can’t wait” to do so he can “knock that off the bucket list.” (This is followed by what appears to be a smiley face.)

There also seems to be some sort of conspiracy afoot.

This motion will almost certainly be denied, for the obvious reasons that it lacks any case law support and is seeking injunctive relief that the court would be unable to provide. So far as I can tell, Merritt doesn’t explain exactly what the subjects of his motion should be ordered to do, or how they would go about doing it, much less how the doing of the requested act or acts would redress whatever injury he claims to have suffered. These are the sorts of things you have to clarify if you expect a court to grant a motion for people to go f*#& themselves, or any motion, really. If he hadn’t fired his attorney(s), they could have told him that. Too bad.

This is of course reminiscent of 2015’s “Notice to F*#& This Court and Everything It Stands For,” which I would also construe as a motion; it was better written but no more likely to be granted. This will probably also be added to the Lowering the Bar Pleading Archive, where it will join such classics as the “Motion to Compel Opposing Counsel to Wear Appropriate Shoes” and the much more similar “Motion for a Fist Fight.”

“To F— This Court and Everything That It Stands For”