The Daily Telegraph reported last week that the Knights Templar, or at least a group that claims to be the heirs of the Knights Templar, had sued Pope Benedict XVI. The lawsuit, filed by the Association of the Sovereign Order of the Temple of Christ, alleges that the Catholic hierarchy wrongly persecuted the group and illegally seized its assets.

There was of course a group called the Knights Templar, founded in 1119 after the success of the First Crusade. The Knights were devoted to protecting pilgrims on their way to Jerusalem, but they also developed a side business in real estate that enabled them to amass thousands of properties and enormous amounts of wealth. These assets came in handy after Muslims reconquered Jerusalem, thus putting the Knights out of a job. Unfortunately, back then sitting on giant piles of cash had a tendency to get you accused of devil worship, heresy, or worst of all, sodomy, which in turn tended to lead to being burned at the stake. In 1307, Pope Clement V dissolved the order, executed its Grand Master and many of its members, and reclaimed all the assets for Christ. 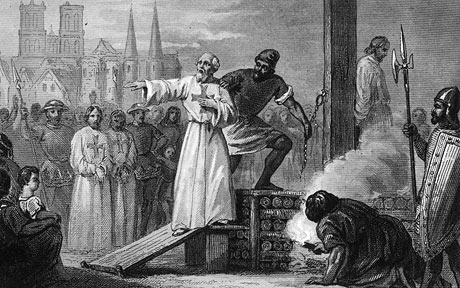 The lawsuit, filed just 701 years later, alleges that the seizure of assets was not justified and that the Church owes ASOTC somewhere around 100 billion euros ($150 billion U.S.). It appears to have been triggered by the revelation just last year, in documents newly declassified by the Vatican, that Pope Clement V had actually absolved the Knights of heresy after secret trials, though he dissolved the order (and burned a few) anyway for what were basically political reasons.

Allegedly, the documents, which include records of the trials, were “misfiled” until recently. Thus, despite the many wisecracks out there (including mine) about the statute of limitations having run on this case, presumably ASOTC is arguing that the statute was tolled by concealment.

A spokesman for the group said the motive was not to seek damages, but rather to restore the “good name” of the Knights Templar by showing “the magnitude of the plot against our Order.” The reporter who covered the story for the Telegraph told NPR that there is no good evidence (Dan Brown notwithstanding) that the order continued to exist after its suppression and, more to the point, no evidence that these plaintiffs actually have anything to do with it. The claim is “ludicrous,” she said, thus either calling it into serious question or proving she is part of the plot.