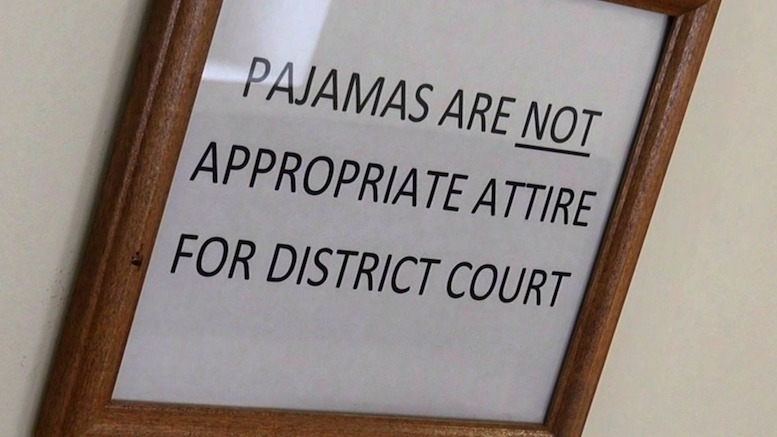 Please make a note of it (image: WNEP News)

No, this is not a lesson I learned from the trial I’ve been working on during the last few weeks (and which, by the way, we won, thank you very much). Counsel for the other side did lots of stuff he shouldn’t have, but at least he wore a suit every day, and while his client didn’t dress up I don’t think she ever wore jammies to court. But in Columbia County, Pennsylvania (among other places), this seems to be something citizens do.

The sign above has therefore been posted outside the courtroom of Judge Craig Long, who told WNEP News he’s seen more and more people come into his courtroom dressed in pajama bottoms, and he does not think that is appropriate. (The term “pajama bottoms” is what they use in the report. To be clear, he would like them to wear something more formal than pajamas; it is not a pants-free courtroom.) 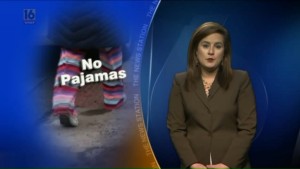 “We have a growing problem of people not dressing appropriately for court,” Judge Long said. “I just put [the sign] out there as a reminder of the code of conduct that should be followed when appearing in court.” He said he doesn’t care if people wear pajamas around, even if they are in the courthouse to just pay fines or get paperwork. But not if they are actually going to enter a courtroom.

“[I]f you’re going to church,” he said, “you should dress appropriately. We think that if you’re going to court, you should dress the same way.” Unless you wear PJs to church, I assume, because then don’t dress the same way. Otherwise, do. “It’s just there as a reminder,” Judge Long continued. “It’s not a law. It’s not a rule or something we can enforce.” Which is a little odd, because I think it is a rule he can enforce, on the theory that dressing too casually is disrespectful to the court and conceivably could get you held in contempt.

It might be different if you had political slogans written on your pajamas, or if you could argue you wear pajamas for religious reasons (see above). But that doesn’t seem to be the case here. It’s just that some people apparently roam around in pajamas or at least pajama bottoms, and a subset of them don’t change before entering a courtroom. Contempt citations for violating a dress code are surely very rare, partly because it seems unlikely anyone would defy a court’s order to go change clothes. But unless the intent or effect was somehow discriminatory, this should be within a court’s power to enforce.

It is easier to find cases involving inappropriate juror attire, maybe because jurors are generally there against their will/to provide a public service and so may be less concerned about showing disrespect. Unlike litigants and counsel, that is, jurors don’t want anything from the court (except lunch). And jurors are sometimes discharged or sent home to change for this reason, although that too could be an issue. In 2014, for example, a Florida federal court sent two prospective jurors home for this reason (see Wall Street Journal and North Carolina Criminal Law blogs), and the defendants later claimed that excluding them violated their right to a jury drawn from a fair cross-section of the community. That court’s dress code required coat-and-tie-level attire, though, which is very unusual and could conceivably exclude a lot of people. The NCLC blog cited a case from that state upholding a judge’s authority to exclude prospective jurors wearing shorts or tank tops, so that happens there.

Then there’s the District of Columbia, which says that its courts “respect individual styles and fashion trends,” but does draw the line at “gang paraphernalia and insignia; exposed undergarments; clothing with words, depictions, or messages that are intimidating or obscene; clothing with sexual or drug references; and sheer, see-through, or provocative clothing.” So again, standards vary.

WNEP News spoke with two citizens of Catawissa Township, one of whom supported the pajama-bottom ban and one who opposed it. “I’m sorry, no pajama pants,” said Carla. “I don’t think it should matter,” said Michael, who now cannot argue he is not on notice of the court’s policy. “If you want to wear pajama pants, wear pajama pants.”