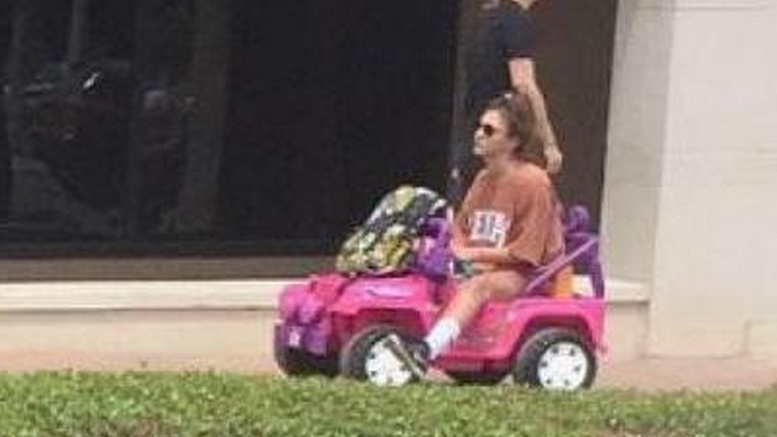 Tara Monroe is a college student in Texas who has gained some notoriety for her response to a DWI arrest in March. Monroe, whose “license was automatically suspended after [she refused] a breathalyzer test after a Waka Flocka concert,” then had to find some other way to get around. She has a bike, but “[r]iding a bike around campus sucks,” she noted. “Like, really sucks,” she added. 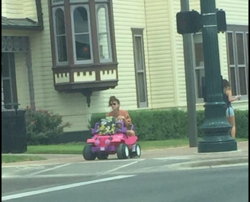 So, after considering her options, she spent $60 on a tiny pink electric-powered Barbie Jeep (right). Since then, the report says, she has rolled around campus “leaving a trail of her laughter and Snapchats everywhere her little 12-volt battery can take her at 5 mph.” She said she enjoys driving the jeep around town and when going out with friends, something she said she planned to do in November for her 21st birthday.

I hate to be the bearer of bad news, but that last part is not a good idea. As many of you know by now, driving something unusual is your right as an American, but driving something unusual while intoxicated can still get you in legal trouble. That’s been true even for vehicles that arguably are not at all dangerous to anyone (e.g., Zamboni, wheelchair, inflatable raft, motorized beer cooler), and there’s no “ridiculous vehicle” exception (e.g., golf cart, motorized bar stool, Christmas parade float). In any event, it always comes down to what the state’s law provides.

So, is it possible to get a DWI on a 5-mph Barbie Jeep under Texas law? Yep. Penal Code section 49.04 prohibits being intoxicated “while operating a motor vehicle in a public place.” And “motor vehicle” is defined as “a device in, on, or by which a person or property is or may be transported or drawn on a highway, except a device used exclusively on stationary rails or tracks.” There is no question that a Barbie Jeep is a “device” by which a person “may be transported … on a highway,” and so if they catch you operating one in a public place (highway or otherwise) while intoxicated, they could charge you with violating Section 49.04. Should they? Maybe not. But they could.

I probably don’t need to say that this is just my analysis; there are no Texas cases (yet) that address these laws in the specific context of Barbie Jeeps. There are cases holding that a forklift is a “motor vehicle” for this purpose (which seems right) and that a motorboat is not (which doesn’t, but I think the law has since been changed). So far as I can tell, no Texas case has dealt directly with the issue of whether it makes sense to apply a DWI law to a “motor vehicle” of this kind. It looks like the Texas Court of Appeals had a chance to address something like this question in a recent case, but it found the defendant had waived the argument. Lewis v. Texas, No. 02-12-00109-CR (Tex. Ct. App. Apr. 18, 2013).

In Lewis, the defendant was arrested after a fairly ridiculous low-speed chase following an event at the Texas Motor Speedway. He had apparently driven a golf cart to the event (not in it, but to it), and was not observing the rules of the road as he was leaving. He almost hit an officer who was directing traffic, and then did (allegedly) hit the arm of a second officer, ignoring calls by both of them to stop. The second officer then apprehended him by simply jogging alongside the golf cart and grabbing the steering wheel (“what’s the problem, officer?” Lewis actually said at that point). The evidence showed that Lewis had a BAC of about twice the legal limit, but it also seems to show he wasn’t going much faster than the Barbie Jeep’s 5 mph top speed.

A jury convicted Lewis of DWI but acquitted him of evading arrest. (Oddly, it’s called “evading arrest” in Texas even if you don’t.) On appeal, he argued that the prosecutor’s definition of “motor vehicle” as “anything that can put you on the road” had misled the jury, and also that if the statute was actually that broad (broad enough to cover “skateboards and roller skates and various household conveniences,” as he put it), it would be unconstitutionally vague. But he had failed to preserve these arguments, the court held, so it didn’t address them. They weren’t really very good arguments anyway, especially since Lewis had already conceded a golf cart was in fact a “motor vehicle” under the statute, but his lawyer’s failure to object at trial means the arguments will have to wait for another day.

Tara might be able to run them up the flagpole if she gets a DWI in her Barbie Jeep, but I wouldn’t recommend it. If she must drink and “drive,” she should at least stay on private property.

Casey Anthony Sued for $3 Billion by … Someone