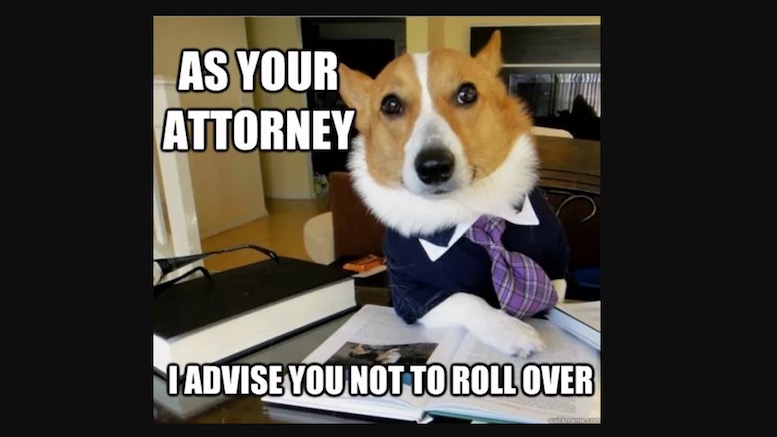 One of many lawyer-dog memes that are irrelevant here (image: The Internet)

I shall analyze the question presented in this matter using the traditional “IRACAR” framework for legal analysis, as follows.

On Friday, the Louisiana Supreme Court declined to review the trial court’s ruling in State v. Demesme refusing to exclude incriminating statements that Desmesme allegedly made to a detective. The vote was 6-1 but there was no majority opinion—the court just denied review and noted one justice had voted to grant it. But Justice Crichton, one of the six concurring justices, did write a very brief opinion, saying he wanted to “spotlight the very important constitutional issue” presented. The conclusion above—including “reference to a ‘lawyer dog'”—is taken almost word-for-word from that opinion.

It’s not clear to me why he wrote this, because the court’s refusal to take the case means that, and unless something changes, the statements will be admitted against Desmesme at trial. If he’s convicted, then the very important constitutional issue will be presented again when he appeals. (Last week’s ruling meant only that the court refused to take it up immediately. He can still appeal if he loses.) So if the point was just to inform the general public about this issue, it’s hard to see why it was necessary to do that now. But he did it, and so now the general public has been informed, at least, that one or more justices on the Louisiana Supreme Court believe that a “reference to a ‘lawyer dog'” is not sufficient to invoke your right to counsel.

What about the conditional nature of the rest of the statement? Does that change anything? Well, I’m not sure it’s conditional. If you’re in custody, it seems fair to assume that the police had some reason to think you did something, doesn’t it? In fact, you might even say—and just bear with me here for a second—they presumably have some cause to think it’s probable you did something. So, if you’re a “reasonable police officer in [those] circumstances,” and someone says to you, “if you think I did it, why don’t you give me a lawyer,” and you do think he did it—why don’t you give him a lawyer? Condition fulfilled.

Scott Greenfield (who unlike me is a criminal-defense attorney) sort of disagrees, though I think he is making a different point on which we totally agree: if you are taken into custody, say three things: (1) “I won’t answer any questions,” (2) “I want a lawyer,” and then (3) nothing:

It has been brutally clear that an invocation of the right to counsel must be clear, unequivocal and unambiguous. There was nothing about Demesme’s invocation that met the test, with two conditional prefaces before the “dog” question. [Debatable.]

It’s not that judges are too stupid to grasp that his purpose was to invoke his right to counsel. It’s that judges don’t want to suppress statements, and the Supreme Court has set up a trap for the unwary, knowing full well that most people under interrogation will try to wiggle their way through by moderating their request so as not to come off looking too guilty. People have this bone in their head that makes them think they can still talk their way out of their predicament, so they qualify their request, use what they believe to be plausibly ambiguous wording, to both ask for a lawyer while not appearing uncooperative.

I do not want to answer questions.

I want to speak with my attorney.

You must make the first statement, remember, because the U.S. Supreme Court has held that silence does not invoke your right to remain silent. Or, as I think I put it in a post that I now oddly cannot find, you have to speak up in order to remain silent. You must then make the second statement, unequivocally, and must then say nothing else, for the reasons discussed above. Because, although “reference to a ‘lawyer, dawg,” should be enough for a reasonable officer to understand you want a lawyer, as this opinion shows, some courts may not think so.

153rd Time is the Charm for Frequent Arrestee